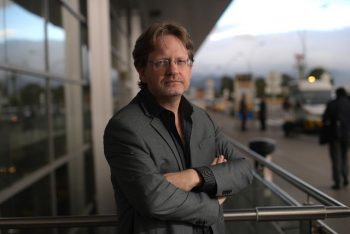 Respected German scholar Kai Ambos will visit W&L Law this month to help kick off celebrations marking the German Law Journal’s 20th anniversary.  The journal is an immensely successful English-language forum for scholarship on developments in German and European jurisprudence. It was co-founded by W&L law professor Russ Miller.

Ambos will discuss his new book on the Nazi legacy in German criminal law. His talk is scheduled for Wednesday, Sept. 11 at noon in Classroom A in Sydney Lewis Hall on the campus of Washington and Lee University. The event is free and open to the public.

The presentation by Ambos will inaugurate the year-long speaker series “German Law: Past, Present and Future.” Other events in the series include a lecture by Northeastern Law’s Claudia Haupt in January and a panel discussion in April featuring emerging, impressive new legal scholars from Germany.

Founded 20 years ago by Miller and Peer Zumbansen, the German Law Journal is a dynamic and engaging forum for legal research from a transnational and interdisciplinary perspective, including coverage and commentary on developments in German, European, and International jurisprudence.

Publishing eight issues per year, the Journal is the top-ranked European law journal globally according to Washington and Lee School of Law’s prestigious journal ranking, as well as the third-ranked European law journal on Google Scholar.  The Journal was a pioneer in the open-access and online publication of scholarship – an approach that now is emerging as the standard.  It success led to a recently announced publication partnership with Cambridge University Press.

For more than a decade Washington and Lee law students have assisted with the editing and administration of the Journal. Chi Vo Kavanaugh ’17L, a corporate associate in the Houston office of Kirkland & Ellis, served as Executive Editor of the Journal as a 3L. “Working as an editor on the GLJ, I got to practice doing rules-based detailed work and communicating thoroughly and efficiently. Most importantly, I learned how to work with a team and manage competing interests,” she said.

“My GLJ experience has been directly applicable to my work as a capital markets associate; the skills you develop while putting together an issue of the journal are surprisingly similar to the ones you use when preparing a public filing or drafting an offering document. Having the GLJ on my resume has also been a great boost for me professionally and it continues to open doors. I’ve been staffed on certain deals specifically because I’ve had international law exposure.”

Russ Miller is a recognized expert in German Law and Legal Culture and the author/editor of a number of books in the fields of comparative law and international law. His books include “Privacy and Power: A Transatlantic Dialogue in the Shadow of the NSA Affair,” “The Constitutional Jurisprudence of the Federal Republic of Germany”, and “Comparative Law as Transnational Law.” Miller has served as a KoRSE Fellow at the University of Freiburg, a Fulbright Senior Research Fellow in residence at the Max Planck Institute for Comparative Public Law and Public International Law in Heidelberg, Germany, and Robert Bosch Foundation Fellow at the German Federal Constitutional Court and the European Court of Human Rights.