Grappling with the World’s Complexities The Shepherd Poverty Program set Victoria Kumpuris Brown ’98 on the path to a career in philanthropy. 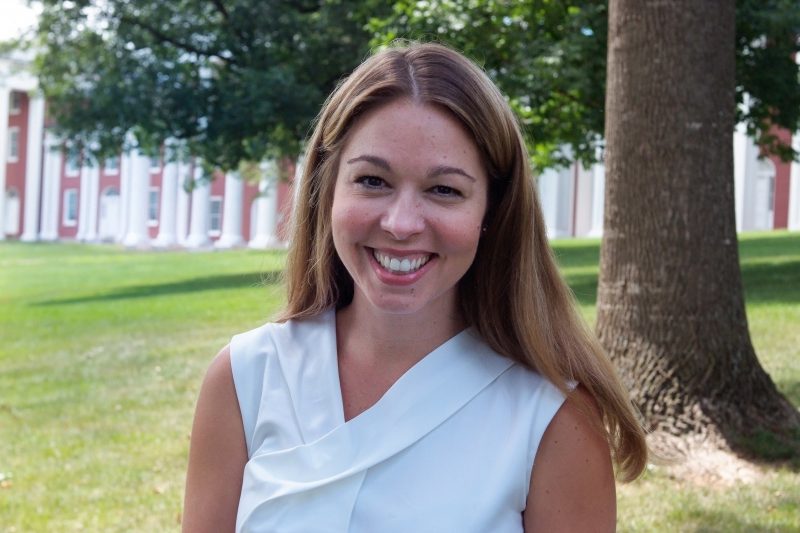 “I wrote a letter to the leadership of the university framing my concerns and calling for a more entrenched service program for students. Professor Beckley championed my letter and my dawning observations and invited me to become his work-study for a new program he was forming which later became the Shepherd Program.”

Victoria Kumpuris Brown ’98 is a senior program officer at The Robert Wood Johnson Foundation, where she focuses on leveraging the power and innovation of the private sector to build a Culture of Health for all Americans. Before working in philanthropy, she was with the Alliance for a Healthier Generation, an initiative of the Clinton Foundation and American Heart Association. During her tenure, Victoria secured commitments from Coke, Pepsico and Dr. Pepper to reduce calories consumed by all Americans from sugar sweetened beverages by 20 percent by 2025; got McDonalds to introduce affordable healthy options, transform their marketing practices and remove soda from kids meals across 85 percent of their global business and got leading health insurers to cover preventative services for health and well-being for children and families. She is a member of the Shepherd Alumni Advisory Committee.

Q: How did the Shepherd Program shape your years at W&L?
In the fall of 1994, I arrived in Lexington full of excitement and not just a little angst about what my college years would bring. Washington and Lee both mirrored and was completely opposite of my upbringing in Little Rock, Arkansas. While I grew up with a family who supported me wholeheartedly financially and emotionally, I was a graduate of public schools where I was the racial and ethnic minority for most of my schooling and was exposed to diversity, poverty and adversity from my earliest days as a student. Fate took good care of me as I was assigned Professor Harlan Beckley as my freshman-year advisor. Not many of these relationships end up with your advisor and his family attending your wedding but, to say the least, this match was one I will always be grateful for.

Professor Beckley guided me when I struggled with navigating a student body that was very unlike the one I graduated from. I struggled with the privilege around me along with my own and how disconnected it felt from academic pursuits. What was the ethical and moral responsibility of such a fortunate student body to both give back to their community but also more deeply understand their obligation to serve others given all the benefits their education and station afforded them? In an unusually brave moment, I wrote a letter to the leadership of the university framing my concerns and calling for a more entrenched service program for students. Professor Beckley championed my letter and my dawning observations and invited me to become his work-study for a new program he was forming which later became the Shepherd Program.

Suffice it to say, I was far from his best student. I remain grateful for him taking that risk as my involvement with the Shepherd Program — while then only in its infancy —  has had a lasting impact on my life. I have spent my career serving others via the public, private and non-profit sectors. I am now in philanthropy and have the unreal job of giving money to causes and strategies to transform lives and communities. I could not have imagined I would end up here but, I know that being listened to and encouraged by Professor Beckley and having the exposure to the Shepherd curriculum set me on the path to finding my life’s work.

Q: Why is this program important for W&L?
The Shepherd Program has proven to not only transform individuals but, has also transformed the student body it serves. I now return to Lexington to find a more engaged group of young people who are directly grappling with the world’s complexities and what their obligation is to make things better. I have also had the benefit of several Shepherd students completing their internships with me. Their commitment to mission-driven work, dedication and insights have made them tremendous ambassadors for both my alma mater and the Shepherd Program.

While I have always been proud to call myself a General, this new spirit has only deepened my connection to the school. I also believe the program attracts a higher caliber of student to Washington and Lee. What was at one time a niche set of course offerings for a small group of students has evolved into a robust program and unique point of differentiation for my alma mater. As I reflect back, I am so grateful that when I began to grapple with one of life’s big questions — what is poverty and what is our responsibility to address it  — I had a professor who guided me, an intellectual framework to support me and an institution that championed asking these questions. This is liberal arts education at its best.