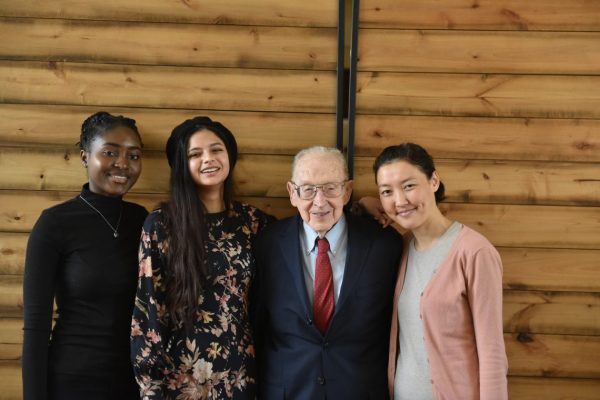 “The Gunn Scholar program is a remarkable manifestation of the impact of W&L on our students and the love our alumni have of our institution and faculty.”

~ Mark Rush, Director of the Center for International Education and Waxberg Professor of Politics and Law

Students have experienced major changes to their routines in recent weeks, but the fact that W&L is an institution offering exceptional opportunities remains unchanged. At the beginning of February, two past recipients of the John M. Gunn International Scholarship, Reem Kandil ’18 (2016-17 recipient) and Bermet Zhumakadyr Kyzy (2010-11 recipient), came together for lunch with the program’s namesake and Tanerfa Tetteh, the current scholar. That meeting highlighted the reciprocal impact that the Gunn Scholarship has had on both the recipients and the larger university community, as well as the immense pride John Gunn himself feels for the accomplished scholars.

Gunn, who is the Lewis Whitaker Adams Professor Emeritus of Economics, enrolled at W&L in 1941 but was called into the Army during his sophomore year. He did not return to the university until he joined the W&L faculty in 1957, where he taught full-time until 1990. He continued to teach courses until 2002 and remains actively involved by giving occasional lectures and contributing research. His latest project involves delving into the history of W&L’s Honor System. Alfred Harrison, who came to W&L as an exchange student from England in 1957, established the scholarship to honor Gunn in 2000.

“Of all the professors I had, he impressed me immensely with his enthusiasm and with the participation he invited among all of us in class, creating a two-way exchange of knowledge” Harrison said.

While Harrison prized his year at W&L, he lost touch with the university for a number of years. Then, he and Gunn reconnected in a most unconventional way. Gunn was watching “Wall Street Week” one evening in 1997, and Harrison just happened to be the guest. When he came on screen, Gunn recognized him. After Gunn wrote to Harrison, the two struck up a correspondence. Gunn recalled that Harrison wrote a warm letter in response, stating that after taking Gunn’s Economics 101 and 102 courses, earning an honors degree in economics at Cambridge became that much easier. Gunn said that Harrison, who had become a successful vice chairman of Alliance Capital Management, managed large institutional portfolios where the investment returns well exceeded the Standard & Poor’s 500 index over a 20-year period.

A few years after their serendipitous reconnection, Gunn was called into Dean Larry Peppers’ office and informed that this generous endowment had been created in his honor. “It is one of the most satisfying forms of recognition I have ever received. Meeting the students and observing how they distinguish themselves has been a joy,” Gunn said.

Harrison enjoyed the full W&L experience during his year on campus, which happened to be Gunn’s inaugural year teaching at the university. In fact, Harrison was in Gunn’s first Economics 101 course. The 1957-58 academic year was golden for Harrison. In addition to a broad array of courses, he joined a different fraternity each week for dinner as part of his exchange program, he was a star player on the soccer team, and he performed in campus theater productions. “It’s been one of the high points of my life, that year at W&L,” Harrison said. “Honoring John Gunn is one way to recognize it.”

To date, W&L has hosted 21 Gunn Scholars from 13 countries across Asia, Africa, Europe and South America. While the program only lasts a year for each recipient, the impact goes far beyond, and the ties to W&L take root for many. Bermet Zhumakadyr Kyzy, the 2010-11 Gunn Scholar, returned to W&L for the 2019-20 Winter Term as a teaching assistant to Richard Bidlack, the Martin and Brooke Stein Professor of History.

“I love the Washington and Lee community. The professors are brilliant and the students are so smart,” Zhumakadyr Kyzy said. “It’s so good to be here – it’s like another home for me.”

Zhumakadyr Kyzy said Gunn is not just a namesake for the program but a mentor to her and many others. Reem Kandil seconded this. Gunn had called Kandil Harrison’s ideal scholar, as she participated in many extracurricular activities. When her 2016-17 year was up, she chose to transfer to W&L to finish her undergraduate coursework and graduated in 2018. Kandil, a native of Cairo, Egypt, who now works as a marketing manager for a Canadian software company, visited W&L in February to reconnect with Lexington friends.

“I think Professor Gunn’s impact is so great as to be unquantifiable. He’s the heart and soul of the program, as well as its brains. He’s a brilliant economist, a World War II veteran, and smarter than I’ll ever be in my entire life,” Kandil said. “In addition to all of the above, he’s one of the most decent people I’ve ever met. I am blessed to have met him and will be a fangirl of his forevermore.”

The 2019-20 Gunn Scholar, Tanerfa Tetteh, of Ghana, jumped at the chance to take many courses that she would never have had the opportunity to study as part of her business and finance academic track back home. Tetteh felt inspired after meeting Kandil and Zhumakadyr Kyzy and hearing about many of the other Gunn Scholars, including Felix Yeboah from Ghana and Rachel Mourao from Brazil, who returned to campus to give public lectures in 2018-19.

“Past Gunn Scholars are doing so many amazing things and really feel like this experience helped shape their future,” she said. “I like to think I can expect great things, too, and I have big shoes to fill.” Tetteh plans to finish her degree in Ghana to become an accountant but hopes to return to the States for post-graduate studies.

Zhumakadyr Kyzy summed up the feelings of many Gunn Scholars with her sentiments: “My world expanded tremendously because of W&L. Being here has been one of the major influences in my life.”

Mark Rush, director of the Center for International Education and Waxberg Professor of Politics and Law, is thrilled to see the program reach a point where Gunn alumni are returning to give back in various capacities, enhancing the academic environment in ways that expand global learning opportunities and international awareness.

“The Gunn Scholar program is a remarkable manifestation of the impact of W&L on our students and the love our alumni have of our institution and faculty,” he said.

Gunn, now 96 years old, has a legendary reputation at W&L, and his far-reaching influence can be traced directly to how much he cares about all W&L students, especially the Gunn Scholars.

“I am just enormously impressed with what they have accomplished and with the success of Alfred’s program,” he said. “I consider it a blessing to have spent my life in the Lexington community serving this institution I admire so much.”

In addition to the international scholarship, Gunn has inspired several other significant gifts. An endowment that supports an economics award in his name was established by former students shortly after Gunn’s retirement, and another supports new course development, curriculum innovation and faculty professional development in the Williams School. On the occasion of his 50th reunion last spring, a member of the Class of 1969 established the John M. Gunn Endowment for Student Learning and Engagement.