Hometown Hero: Neil November ’48 Over the past seven decades, the 92-year-old has established a legacy that encompasses politics, religion, airports, education, museums, theaters and gardens. 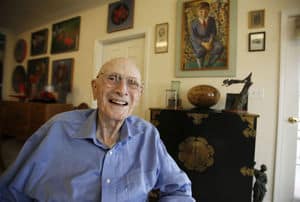 The Richmond Times-Dispatch has a lovely profile of Neil November, a 1948 graduate of Washington and Lee University, in its Dec. 12 issue, covering his lifetime of community involvement and philanthropy in Richmond.

Neil, who grew up on the famous Monument Avenue, has led a busy life after serving in the Navy during World War II. Over the past seven decades, the 92-year-old has established a legacy that encompasses politics, religion, airports, education, museums, theaters and gardens.

The article is jam-packed with his astonishing array of accomplishments and touches on his love of aviation — as a child he built and flew model airplanes “as long as the gasoline would last” — to his courtship of his wife of 66 years, Sara Belle, who noted it could have been 70 if he had proposed earlier.

Former Gov. Gerald L. Baliles, who worked with Neil on the Virginia-Israel Commission in the 1980, said, “There’s no one else like him. Somehow, he has managed to elevate public vision to focus on investments for the future, and he has done it with verve as well as vision, always with energy and a ‘mixed cocktail’ of humor and command. He really has been a master choreographer of so many things that have occurred in Richmond for the good.”