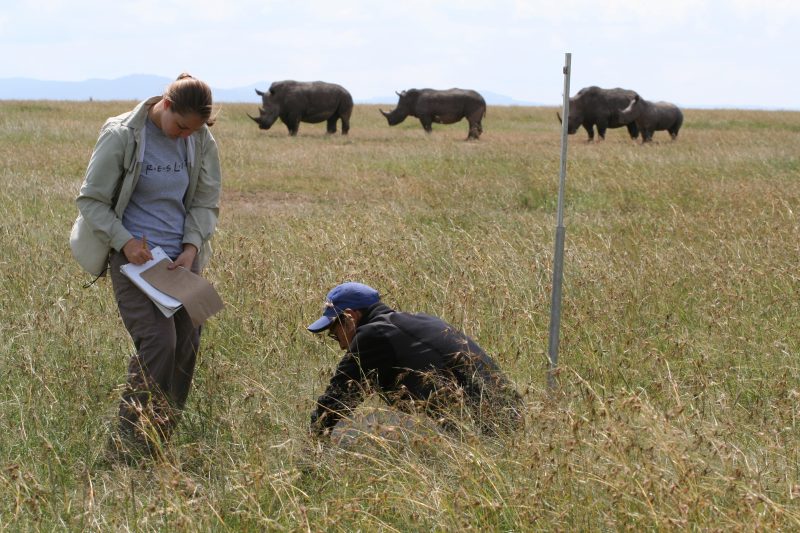 Jenny Schieltz ’08 doing field research on the impact of cattle on large wild mammals in Kenya.

Jennifer Schieltz ’08 knew soon after graduating from Washington and Lee University that she wanted to pursue a Ph.D. in ecology and do field work outdoors. Her dream was to work with large mammals in Africa.

That dream came true during a six-year span as she worked toward a Ph.D. in ecology and evolutionary biology at Princeton University. For five years, she spent three to six months a year in central Kenya studying the impact of cattle on wild mammals.

“I love nature and the outdoors, and I like to figure out answers to questions and problems,” she said. “I look at a field site and it is beautiful, but I also want to know how it works.” Schieltz not only lived her dream during her Ph.D. program, she continues to live it — in the U.S. this time — in her new job teaching and directing a field research center for Iowa State University.

While pursuing her doctorate, Schieltz taught courses for both Princeton and Columbia University undergraduates at Princeton’s Mpala Research Center in Kenya, but her research took her to nearby Ol Pejeta Conservancy. The 90,000-acre property is home to a successful beef cattle program while also serving as the largest black rhino sanctuary in east Africa. A habitat for zebras, antelopes, warthogs, Cape buffalos and three of the world’s last remaining northern white rhino, it also supports a high density of predators.

Although there was a fence enclosing the perimeter of the property, the wild animals roamed freely within. Cattle were sorted into herds of 100-150 animals and were protected from predators during the day by herders. At night, they were enclosed in circular corrals called bomas — originally thorny plants arranged to keep cattle in — now made of adjustable metal fencing.

With students and course staff during one of the courses she taught to Princeton and Columbia undergrads.

Meeting with community members at a Masai village near Amboseli to hear about human-wildlife conflict.

Teaching a course with Princeton and Columbia undergrads and students from a girls school during a field trip to Amboseli National Park.

Her thesis looked at the balance between the wild species and the cattle. “Cattle grazing affects the grass; sometimes that can improve the quality of the grass, which is beneficial to small animals like gazelles and warthogs,” she said. “It could also lead to competition with other species, such as Cape buffalos, which need to eat more grass.”

After graduation from W&L, Schieltz joined the lab of Guy ’86 and Kim Caldwell at the University of Alabama. During her two years there, she helped the researchers in their work to advance cures for Parkinson’s Disease. She learned a lot from the association but ultimately decided that she wanted to pursue field work rather than lab-based research.

Employed by Iowa State since early March, Schieltz is looking forward to classroom teaching in the fall. Until then, she is tackling the second half of her hybrid job — managing the university’s Rod and Connie French Conservation Camp, located about 50 miles west of Missoula, Montanna, surrounded by the Lolo National Forest. Formerly a resort and hunting lodge, the camp was donated to the university’s foundation by the Frenches and is being developed into a permanent research center for Iowa State students.

Until students arrive in June, she is getting the camp ready, including converting guest rooms into bunk rooms and a restaurant into a dining hall, as well as carving out space for classroom lectures and a possible lab.

“Since this will be the first summer, we’re learning how to use the space and working on logistical things, like hiring a cook,” said Schieltz.

She will visit the facility for the first time in April, when she also plans to meet officials from the National Park Service, the Montana Department of Fish and Wildlife and the University of Montana — with whom she wants to partner on student projects.

The three courses offered at the camp in 2017 include one she will teach on field ecology. The courses will include a few lectures, but “then we’ll take the students out into the forest as much as possible,” Schieltz said. Each student will learn to form a hypothesis, test it through field work and then present their work to others.

Students will mount cameras to photograph and observe the behavior of such animals as elk, deer, moose, bears, wolves and mountain lions. At nearby Fish Creek, students will monitor habitat for endangered trout species. “There is no better way to learn the material and gain some great practical skills that hands-on in the field,” said Schieltz.

Schieltz’s interest in field research was evident during her undergraduate days. She worked with biology professors John Knox and Larry Hurd, doing summer research on plant and arthropod species diversity. Her independent research project senior year with David Marsh, professor of biology, involved capturing, marking and releasing red-backed salamanders, which she found “all over back campus — under logs and leaves.”

An A. Paul Knight Internship in Conservation took her to The Flat Ranch preserve in Idaho, a 1,600-acre cattle ranch that serves as the hub for a community-based conservation effort to restore and protect the biodiversity of the greater Yellowstone ecosystem.

There she educated visitors about the ranch’s heritage and The Nature Conservancy’s programs to protect and restore wildlife habitats. She also helped manage the ranch, leading to her interest in the balance between cattle and wildlife sharing the same habitat that she explored in more depth in Kenya.

On campus, Schieltz was an editor of the Journal of Science, volunteered as a peer tutor in biology and French, was a founding member of the Polo Club and was a member of Pi Beta Phi sorority.

Schieltz said, “I loved W&L because of how well you get to know your professors and how much they care about your future.” She still keeps in touch with many of them. The university prepared her for opportunities in all disciplines and “taught students how to talk to a variety of people and understand different perspectives.”

She continues to be fascinated by the natural world and enjoys talking to others — especially kids — about science. She has done outreach to schools, and one of her fondest memories of her time in Kenya was working on the Kids Twiga Tally. “We brought nearly 100 Kenyan school children from both rural and urban, rich and poor schools to the Mpala Research Center to help us count giraffes (twiga in Swahili) by taking photos of them and using new software that can identify individuals based on their unique coat patterns.”

To Schieltz, finding the right balance — “to protect nature and make livelihoods for people,” continues to be her mission and her passion.