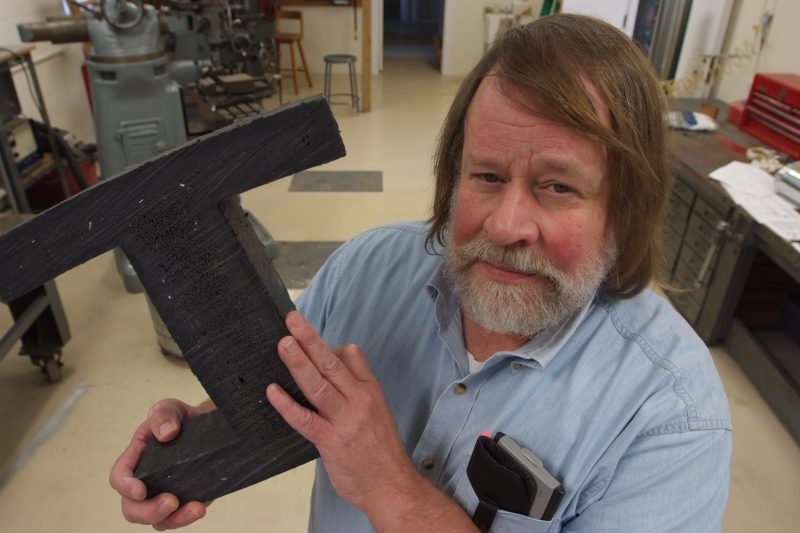 Ken Van Ness with a sample section of a novel polymer material.

Van Ness was born in Glen Ridge, New Jersey, in 1945. He graduated from Bucknell University with a B.S. in physics and earned his Ph.D. in mechanics and materials science from Rutgers University. He joined W&L in 1986 and retired in 2011.

“Ken Van Ness was without a doubt the top scientist at Washington and Lee for 25 years,” said Ken Lambert, professor of computer science. “Equally at home with equations, the electron microscope and the extruder for the polymers he was designing, developing and testing, he made his mark both as a world-class researcher on the recycling of plastics and as a teacher of and advisor to the many students who worked with him on engineering projects.”

Van Ness taught mechanics, thermodynamics, solid mechanics, physical metallurgy and polymer science. “Students gravitated toward Ken as they quickly learned that his apparent tough exterior was a thin layer over a caring individual,” said Joel Kuehner, professor of physics and engineering. “Whether you were struggling to grasp a difficult concept or your car was making an unsettling noise, Ken always seemed to be around with the right amount of wisdom and advice, often wrapped inside subtle hints rather than direct statements. He inherently understood that knowledge was better discovered by the person seeking it rather than handed out by someone else.”

Known for his creative, rigorous lectures, Van Ness is also remembered by his colleagues as a professor who seamlessly integrated teaching and research. “Whenever you saw him, he had on his magnifying glasses; you never knew if he was coming from the lab or going to class, and there wasn’t much difference between the two,” noted David Sukow, Robert Lee Telford Professor of Physics and Engineering. “He cultivated research collaborations, turned out generations of well-trained engineers and showed us all how to mentor our students through scholarship.”

Van Ness’ research interests focused on polymer blends composed of both refined and unrefined recycled plastic wastes which had applications in construction materials. In 2002, he and his research colleagues at Rutgers and Princeton received a $2.35 million seed grant from the New Jersey Commission on Science and Technology to study immiscible polymer blends. Earlier in his career, Van Ness received grants from the National Science Foundation, the Center for Innovative Technology and the Plastics Recycling Foundation at Rutgers to study the mechanical strength and structural integrity of recycled plastics.

“Ken created an internationally known research program in the development and use of recycled plastics,” said Ron Reese, professor of physics emeritus. “This program drew students to us like a magnet, and many went on to successful careers in materials research thanks to the mentoring and research skills they learned under him. Despite much skepticism within the materials community, he and his collaborators at Rutgers University developed structural plastics strong enough to build tank-carrying plastic bridges for the military and railroad ties suitable for transit systems.”

Prior to joining W&L, Van Ness was a blacksmith and was admired for being able to repair anything from fences to small engines. “His hands and fingers were impressively large and strong yet simultaneously as delicate as those of a concert pianist as he measured the material properties of his many plastic samples,” said Reese. “He was a wonderful colleague who broke many a stereotype at W&L with his flowing hair, beard and casual attire that belied his intelligence, professorial rank and expertise. His reputation and legacy here at W&L will endure as long and as well as the plastic materials he developed — for the ages.”

Van Ness is survived by his wife, Patricia “Trish,” and sons, Evan and Kiel.

There will be no services held at this time.