In Memoriam: Theodore Carter DeLaney Jr. ’85, professor of history emeritus During his career at W&L, DeLaney brought his passion for justice and inclusion to the classroom and to his scholarship. 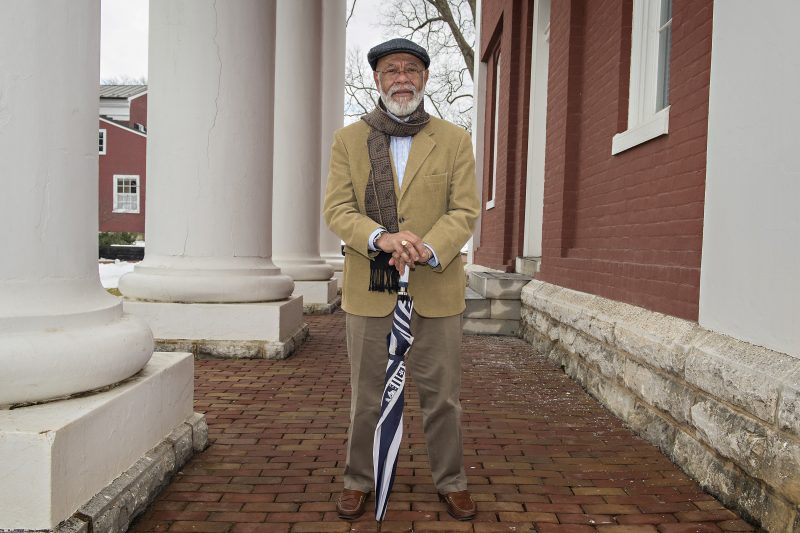 A Mass of Christian Burial for Ted Delaney ’85 will be held Jan. 23 from 11 a.m. to 12 p.m. at St. Patrick’s Catholic Church. Due to COVID restrictions, there is limited seating. The family invites you to join the service via livestream on YouTube and Facebook.

Theodore “Ted” Carter DeLaney Jr. ’85, professor of history emeritus and former chair of the Africana Studies Program at Washington and Lee University, died Dec. 18, 2020. He was 77.

“Professor DeLaney’s life and work represent the best of the university’s core values; he was a beacon of moral clarity. During his career at W&L, Ted worked tirelessly to make the school a more welcoming and inclusive environment. His scholarship provided keen insights into the history of the university and the local community, which illuminated the national conversation around civil rights. He was a mentor to numerous students and faculty, providing them with wise counsel. W&L is a better place because of Ted, and we are immensely grateful to him. Our entire community mourns Ted’s passing, and joins me in sending condolences to his widow, Pat, and the rest of their family,” said President Will Dudley.

DeLaney was born Oct. 18, 1943, in Lexington. He graduated from Lylburn Downing School, which at the time was an all-Black school. He declined a scholarship from the United Negro College Fund that would have enabled him to attend Morehouse College in Atlanta; his mother was worried that he would get caught up in the civil rights movement there.

Instead, after working as a gardener and a waiter and a brief stint as a postulant at a Catholic monastery of the Franciscan Friars of the Atonement in upstate New York, DeLaney took a job as a janitor at W&L in 1963 and was quickly promoted to laboratory technician. In 1979, he enrolled in his first class at W&L and became a full-time student four years later. DeLaney graduated with a B.A. in history, cum laude, in 1985 at the age of 42. He also had 15 undergraduate credits from Virginia Military Institute. He earned his Ph.D. in history from The College of William & Mary in 1995.

After graduating from W&L, he taught American history for three years at the Asheville School in North Carolina, before beginning his graduate studies. While he was an A.B.D. working on his dissertation, he taught at W&L from 1991 to 1993, and then at the State University of New York at Geneseo from 1993 to 1995. He returned to W&L as a full-time faculty member in 1995. DeLaney received tenure and was promoted to associate professor in 2001 and to full professor in 2018. He retired in 2020.

During his career at W&L, DeLaney brought his “passion for justice and inclusion to the classroom and to his scholarship,” noted his History Department colleagues in his retirement citation. “He offered essential courses in the histories of the disadvantaged, the dispossessed and the oppressed. Well before it was part of the Strategic Plan, Ted valued both inclusiveness and diversity in his courses.”

Holt Merchant ’61, professor of history emeritus, recalled, “I had taught a yearly seminar in what we then called Afro-American history, and one of the most important benefits of Ted’s arrival was the marked improvement in our offerings in that area. He was my roommate and my dinner companion at dozens of professional meetings. Our conversations, both there and elsewhere, contributed more to broaden my perspectives than he perhaps realized. Most important, his decision to join the department gave us the diversity that we had lacked until that time, and, of course, the ability to understand the nation’s past more clearly and accurately than before.”

DeLaney taught courses on colonial North America, comparative slavery in the Western Hemisphere, African American history, civil rights, and gay and lesbian history. His popular Spring Term class about the civil rights movement took students on the path of the Freedom Riders through the South.

“Ted cared deeply about his students, who came to his office in droves to meet with him,” said David Peterson, professor of history emeritus. “They were attracted by his empathy and by the model he provided of a public intellectual who was able to make his learning directly relevant to contemporary affairs. He had a marvelous ability to put people at their ease while standing politely but firmly by his principles.”

In 2005, DeLaney co-founded the Africana Studies Program, which he directed from 2005-07 and again from 2013 to 2017. He chaired the History Department from 2007 to 2013, the first Black department head at W&L. He served on over a dozen university committees, including the Working Group on the History of African Americans at W&L and the Commission on Institutional History and Community — for which he also developed a course on the institutional history of W&L that introduced students to archival research in Leyburn Library’s Department of Special Collections.

As a scholar, DeLaney focused on the untold histories of African Americans in Virginia. In addition to research on John Chavis, he recorded the oral histories of western Virginians directly involved in the battle over school desegregation 15 years after the Brown v. Board of Education Supreme Court ruling. Much of his research found its way into the courses he taught and the presentations he developed for alumni colleges, class reunions, neighboring colleges, museums and historical societies. Most recently, he recorded his own oral history, which is now part of W&L’s Special Collections.

DeLaney served his professional and civic communities as president of the St. George Tucker Society, an interdisciplinary organization of Southern specialists, and on the Stonewall Jackson House board of trustees. He was a research fellow for the Virginia Foundation and served on its board of directors. He was the first president of Yellow Brick Road Child Care Center, president of the Waddell School PTA, secretary of the Board of Elections and treasurer of the Rockbridge Regional Library board. In 1991, he held a Commonwealth Fellowship from the Council of Higher Education. He was also an avid local Democrat.

Over the years, DeLaney’s contributions have been recognized with numerous accolades. He was inducted into Omicron Delta Kappa (2001), Phi Beta Kappa (2013), named the Harry F. and Mary Jane W. Redenbaugh Term Professor (2009-12), invited to deliver the Fall Convocation address (2018), awarded an honorary doctorate in Humane Letters from St. Paul’s College, (2005), a Doctor of Letters degree from W&L (2019), and received the NAACP’s Lexington/Rockbridge chapter’s Community Service Award (2018). Since his retirement, a postdoctoral fellowship, a lecture series in Africana Studies and a Ted DeLaney ’85 Scholarship in the humanities and interdisciplinary studies have been established in his honor.

“Ted was an extraordinary friend and mentor who made W&L feel like home to me,” said Molly Michelmore, professor of history and department chair. “He was a trusted colleague, whose counsel — about history, about students, about life — I always sought. He loved W&L — enough to understand and point out where we failed to live up to our own principles.”

DeLaney is survived by his wife, Patricia; their son, Damien Paul DeLaney ’03L, and his wife, Kara; and two grandchildren, Stella and Wyatt.