“A truly liberal arts education should push you to expand your horizons beyond your area of study. As a biology and Spanish double major, [I found] traveling to China and filming a documentary definitely did just that.”
— Olivia Howell ’17 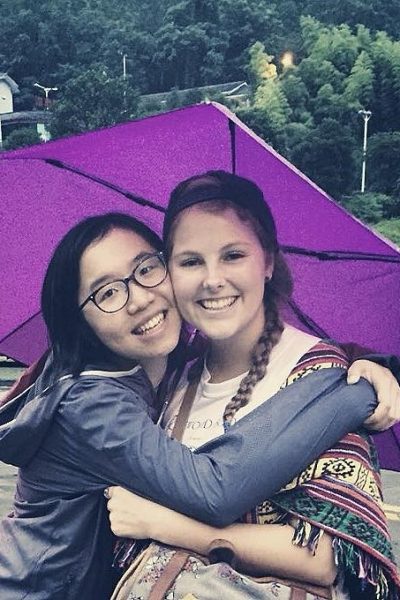 Ten Washington and Lee University students were chosen in 2015 for the International Student Collaboration, a program funded by a grant from the Endeavor Foundation. The program allowed five international students to each take home an American student for the summer.

During the summer months, the international students introduced their guests to the food and culture of their homeland and, in turn, saw their home country through new eyes. The pairs also worked on community service and research projects together.

The students recently took a little time to talk about their experiences and how they were affected by the opportunity.

Spending a summer in Wuhan, China, with her host gave Howell a taste of Chinese culture — literally. Wei and Howell chose to make a documentary comparing the breakfast fare of Wuhan with that of the United States.

Their research in Wuhan was actually the second phase of their project, as they had already taken a Spring Term 2015 class, “Cross-cultural Filmmaking.” During that course, they studied American breakfast traditions and shot footage for the documentary they would finish in China.

What memories about the area you visited will stick with you the most, and why?

Olivia: While I experienced so many wonderful moments and could write a novel overflowing with tales, my favorite memory is of the day that Wan and I went to visit her dad’s hometown. The visit was in honor of a festival that celebrates ancestors. As Wan and I were sitting with her aunts and cousins, lo and behold the snack passed around was boiled peanuts, my favorite food. Growing up in the South, I had been taught that true Southern food included dishes such as grits, fried chicken, biscuits and boiled peanuts. Yet there I was, halfway around the world with a bag of boiled peanuts in my lap. Throughout my trip, I experienced many ways in which the two cultures were different but also similar; however, nothing made me feel closer to this family and their way of life than when I sat and ate boiled peanuts in their ancestral home, just like I had growing up with my family at my ancestral home.

What was it like introducing your study partner to your homeland? When you saw it through their eyes, what was different about it for you?

Wan: I was really excited of introducing my hometown and my homeland’s culture to Olivia. However, when I actually get to introduce Chinese culture to Olivia, I found it really difficult. I realize how ignorant I am about my own culture and how much more I need to study in the future.

Please briefly describe your project. Why did you choose this topic?

Olivia: Wan and I filmed a documentary about breakfast culture/dishes and the impact of Western breakfast chains in the city of Wuhan, China. As the mass communications major, Wan choose the project, and I readily agreed as it covered two areas I enjoy: film and food.

Wan: With my foreign experiences in the United States and Japan, I have gradually realized that I want to become an envoy of friendship in Asian cultural exchange with foreign countries through media. As I’m passionate with both food and film, I decided to do a documentary on the topic of Chinese food, specifically the breakfast dishes in my hometown, Wuhan. In order to learn the skills to make a documentary, Olivia and I took a Spring Term course, “Cross-cultural Documentary,” together with Professor Kevin Finch in the Journalism and Mass Communications Department.

What are the most important takeaways from the research to share with the university audience (and beyond), and how do you plan to do that?

Olivia: The important takeaway is an appreciation for Chinese culture and the unique dishes of Wuhan, as well as a realization of the large impact Western culture is having on this society. Wan and I hope to show our documentary on campus during Spring Term and next year’s Science, Society, and the Arts (SSA).

Wan: The most important takeaway from this project for me is my realization of how much I don’t know about my own culture. I have always thought I knew Chinese culture well. I was born and raised in China, so I should have known China well enough. However, I found that I definitely took it for granted. As Olivia said, we hope to show our documentary on campus during Spring Term and next year’s SSA.

Olivia: A truly liberal arts education should push you to expand your horizons beyond your area of study. As a biology and Spanish double major, [I found] traveling to China and filming a documentary definitely did just that. The documentary experience has caused me to think out how I could combine biology research/education with film, and the interaction with Chinese culture has instilled a desire to return and spend time working in the area.

Wan: I’m very thankful for the opportunity of introducing Chinese culture to W&L campus. Having studied in America for quite a while, I appreciate the fact that this project gave me the chance to observe and look into my own culture again.

Read about the other 2016 Endeavor pairs: