Internship Honors Dickovick’s Profound Legacy at W&L A group of his former students and colleagues established the James Tyler Dickovick Internship in International Affairs, Global Political Economy and the Public Interest Endowment in his memory. 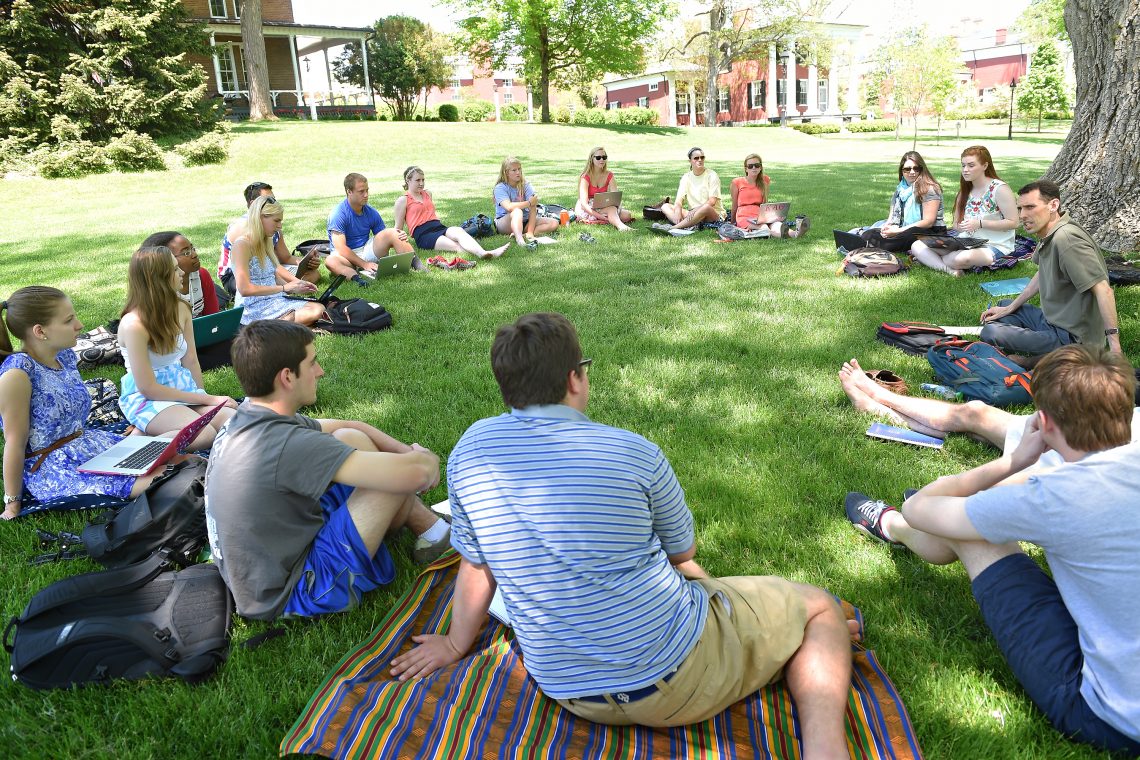 “His biggest influence on me was just as an example of someone who loved what he did, who adored his family and who invested tremendous energy and time in other people. I think that’s the reason he had such a profound impact on so many students with disparate interests. Those are qualities we all wanted to emulate in whatever professional or personal path we chose.”
~Ellie Baur ’09

It’s been almost a year since Tyler Dickovick, Grigsby Term Professor of Politics, passed away after battling Amyotrophic lateral sclerosis (ALS), but his influence prevails in full force, reverberating throughout the Washington and Lee community and in the world at large. To honor his memory and pay homage to the tremendous legacy he created at W&L during his 14 years of teaching, a group of his former students and colleagues established the James Tyler Dickovick Internship in International Affairs, Global Political Economy and the Public Interest Endowment to support international summer internships for future students.

In addition to his abiding love for his family, Dickovick touched the lives of hundreds of students, colleagues and friends, a fact made evident through an outpouring of letters, emails and cards he received after announcing his early retirement due to ALS, as well as during his celebration of life ceremony on campus last summer. Kate LeMasters ’15 spoke at the event, sharing how Dickovick — also known fondly as “Koffi” — was a mentor to her and countless others. He earned his nickname while in the Peace Corps in Togo and invited students to use it or to call him Tyler, whichever made them feel more comfortable, she explained. His celebration of life gave the W&L community shared time to reflect on Dickovick’s far-reaching influence, from students he had in class and advised to those whom he simply greeted and conversed with on the Colonnade. “Tyler influenced my education and professional goals far more than anyone else has,” LeMasters said. “Through his questions, I learned to thoughtfully consider the work I wanted to do and, specifically, how to work in and with communities that are not my own.” 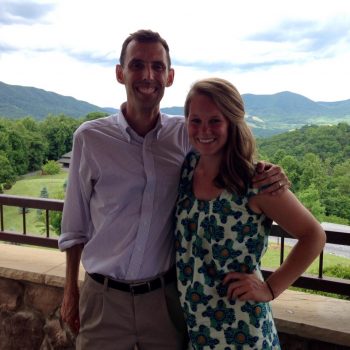 After graduating from W&L, LeMasters spent a year in Romania studying the social, economic and racial disparities in pregnancy. She went on to earn a master of public health degree and is currently working on her Ph.D. in epidemiology at UNC Chapel Hill. She took several of Dickovick’s courses, including the Spring Term abroad course, African Politics in Ghana, and he was her academic and honors thesis advisor, helping her complete a year-long independent study. Now, LeMasters plans to teach and to continue engaged research to help achieve health equity in communities. “Through his example, I learned the importance of continually asking questions, and he taught me how I one day want to mentor my own students,” she said.

An independent study can be challenging enough, but Jack Anderson ’16 engineered an independent major, and without Dickovick, he says it never would have happened. He remembers the process of creating his geopolitics of Central Asia degree as “complete lunacy,” from having to comb through syllabi to find courses across disciplines that could potentially fulfill the major’s requirements to the painstakingly researched 30-page petition to the Courses and Degrees Committee. Dickovick was right there, helping every step of the way. “By supporting and advising me on the independent major, Professor Dickovick didn’t just change my W&L years — he changed my life,” he said. Anderson started his career at FTI Consulting in the energy and natural resources practice. While there, he became interested in cybersecurity and went on to earn a master’s degree in the field from Georgia Tech before joining Phillips 66. His many international experiences as an undergraduate have been incredibly valuable in his work, and he sees nothing but fresh potential to further blend his interests in cybersecurity and the international energy business.

Anderson, who was a Johnson Scholar at W&L, first met Dickovick on the interview panel during the scholarship interview process. Afterward, Anderson knew he wanted to take a class from him and was able to score a coveted spot in his Introduction to Global Politics class. As part of that class, he was required to take a one-on-one oral exam. “Maybe it’s weird to have a favorite test in college, but that format taught me to think critically and speak articulately on the fly, without disregarding depth and details,” he said. “Afterward, we spent the next half hour in a fiery debate over the merits of the Yankees and Red Sox. We bonded over baseball as much as international affairs.”

Anderson’s Global Politics class used the first edition of the textbook Dickovick co-wrote with W&L sociology professor, Jonathan Eastwood, “Comparative Politics: Integrating Theories, Methods, and Cases.” According to Anderson, Dickovick welcomed any and all feedback and suggestions from his students. “It was an excellent book,” he said. “He wanted it to be the kind of book that would enable other professors to teach more effectively, and I would imagine he and Professor Eastwood were quite successful in that regard.”

Fellow W&L faculty member and co-author Eastwood remembers meeting with Dickovick at the Lexington Coffee Shop to discuss the possibility of writing a textbook, a task they enthusiastically embraced, but not without a shade of naiveté. “We would laugh about it later because we grossly underestimated how much work would go into that project and how much of our professional lives it would consume for a number of years, but I think we were both glad that we did it,” he said. While the two scholars spent countless hours together tackling the subject matter and framing it in a way that would engage undergraduates, Eastwood remembers the many laughs they shared throughout the collaboration. “Tyler was one of the funniest people I have ever met, and the sort of person whose laughter was really infectious,” he said. “There are actually some inside jokes in the book, and a few students who worked with us over the years are in on the jokes.” 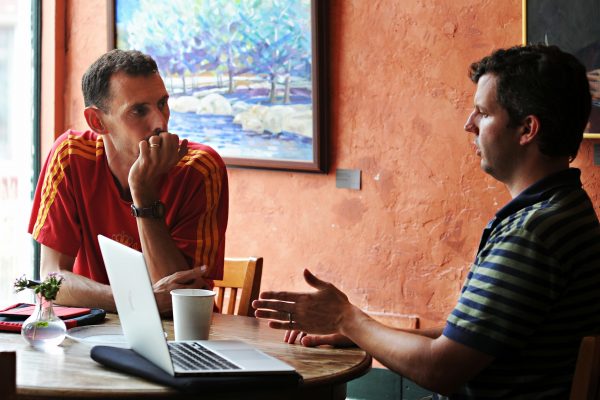 Dickovick and Eastwood at LexCo.

In addition to Dickovick’s humor, Eastwood marveled over his exceptional grace when listening to ideas and sharing feedback, often helping bring to light challenges previously unseen or exciting possibilities not yet explored. “I’ve never met a more dedicated or skilled teacher than Tyler, and I’ve known a lot of great ones,” Eastwood said. “He also showed no sign of being aware of how exceptional he was, or maybe he just didn’t care about that. He always thought about others first.”

Whether helping her navigate her professional opportunities or sharing with her his trademark cradling technique upon meeting her infant son, Ellie Baur ’09 held Dickovick in the highest esteem. She spent most of her childhood in Latin America and was drawn to Latin American politics, law and international relations at W&L. Dickovick and other professors nurtured that interest, and with a glowing letter of recommendation from Dickovick, she attended Stanford Law and now practices at McGuireWoods where she focuses on white collar and antitrust investigations, including corruption investigations, with substantial dealings in Latin America. Baur took a class with Dickovick every semester following Spring Term during her first year and recalls fondly the Latin American Politics course as one of her favorites. Dickovick assigned the class roles in a simulation to examine political impact, and during a visit to his office, he pulled out an envelope marked “top secret,” tapping Baur as a Central Intelligence Agency operative for the rest of the course. “I still laugh thinking about it — his commitment to the joke, and the fact that he knew his students well enough to assign us roles we would dive into — I’ll always remember that,” she said.

But most of all, Baur will remember those qualities so difficult to describe, and she is not alone. “His biggest influence on me was just as an example of someone who loved what he did, who adored his family and who invested tremendous energy and time in other people. I think that’s the reason he had such a profound impact on so many students with disparate interests,” Baur said. “Those are qualities we all wanted to emulate in whatever professional or personal path we chose.”

Thomas Gift ’07 credits Dickovick’s influence as central to his decision to pursue politics in graduate school; he now is a lecturer in the School of Public Policy at University College London and directs the university’s Philosophy, Politics and Economics program. For Gift, the qualities that set Dickovick apart were not just his brilliance and humor.

“He was incredibly humble and kind,” Gift said. “I often think back to the terrific professors I had at W&L — in whose classes I remember watching the clock and hoping the minute hand would stop moving because I didn’t want their classes to end. While I’ll never match Professor Dickovick’s unique and engaging style in the classroom, I have tried to emulate a number of qualities that I think most defined him.”

Anderson recalled pledging funds and plunging into the frigid lake, Issyk Kul, during a research trip to Kyrgyzstan in 2014 to participate in the viral ALS Ice Bucket Challenge. When he learned of Dickovick’s diagnosis a year later, the memory was forever tinged with a bittersweetness. “His lessons in character, whether completely planned or wholly inadvertent, are the lasting ones — and the hardest to satisfy,” Anderson said. “If I could have one more conversation with him, the chaos of geopolitics would be far from central to the conversation. What I valued most from him were his occasional reflections and frequent examples of what it meant to be an honorable person.”

The Dickovick internship is one more way to perpetuate a powerful transcendence. “I was fortunate to be among the many students Tyler graced with his wisdom over the years,” Anderson said. “We are all living his legacy in our own ways.”

To make a contribution to the James Tyler Dickovick Internship in International Affairs, Global Political Economy and the Public Interest Endowment, please contact Senior Director of Development Kenny Melvin at kjmelvin@wlu.edu or 540-458-8410. 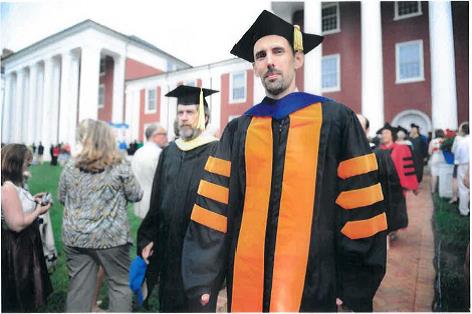