It’s All Bilingual To Me: Melina Knabe ‘17 Melina Knabe was inspired by her own bilingualism to study the effects of knowing two languages on the brain.

“This project was an extraordinary way to translate my experiences growing up as a bilingual into a rigorous scientific study.” 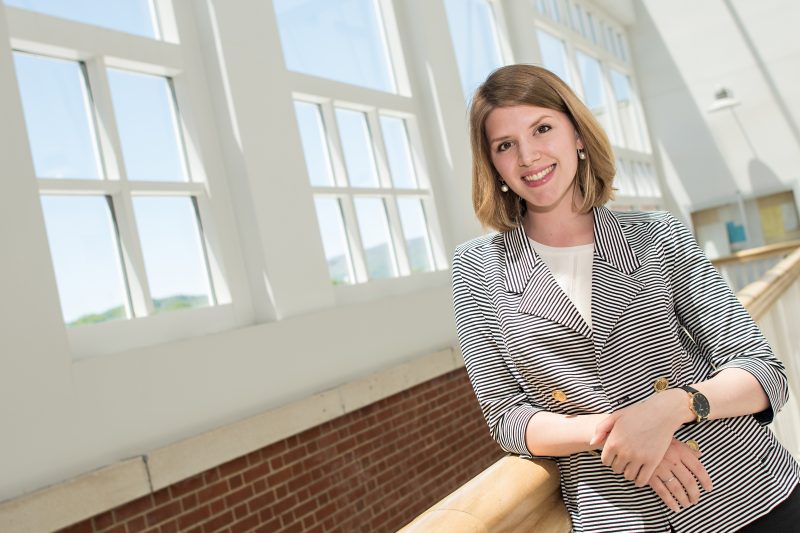 Melina Knabe ‘17 was inspired by her own bilingualism to study the effects of knowing two languages on the brain.

Can you describe your project?

In my project, I investigated the bilingual advantage hypothesis, which claims that having command over two languages leads to enhanced non-linguistic cognition. By non-linguistic cognition, I specifically mean executive control functions or processes that help you to flexibly adapt, suppress and select behaviors necessary to achieve a goal. The need of a bilingual person to maintain both languages active simultaneously, inhibit one, and flexibly switch between both is very similar to the primary domains of executive control known as working memory, inhibitory control and cognitive flexibility.

Research on this topic shows very mixed results, so I was interested in identifying at what age, if at all, one might see a bilingual advantage and how a person’s language background impacts performance on tasks measuring executive control. For this purpose, 300 participants between the ages of 18 and 89 completed three tasks measuring executive control functions and reported on their linguistic and demographic backgrounds.

What about the topic made you explore it?

As a bilingual, I was personally invested in the question of bilingualism’s effect on brain structure and function. Beyond this, it provides an application to educational policy, which I find especially intriguing. This includes questions like how do we best implement second language learning, what time is the best to learn a second language, how does being a second language learner impact learning and academic outcomes, and how does it intersect with questions about linguistic diversity and immigration.

What was the most interesting thing you have learned while working on this project?

While this was not a part of my project directly, I stumbled upon fascinating research by Lera Boroditsky at Stanford University on the way language shapes thought. Examples of research on this topic include comparisons of the way speakers of different languages make sense of time and agency, and perceive color. It’s a fascinating topic!

What was the biggest challenge you faced?

One of the biggest challenges I faced was grappling with the volume of data and possible ways of analyzing and making sense of the data. As a researcher, you are a type of translator, which is a weighty responsibility. You learn that there is no agreed-upon formula for answering your questions and that a variety of choices are made along the way. First, in terms of data analysis. Second, you make choices in how to interpret the patterns you see — albeit in the framework of current literature — and in how you tell the story.

What insight — or insights — did you gain during the research period?

In respect to the project, I learned that asking yes or no questions does not suffice. Especially in terms of the bilingual advantage, it is far more valuable to ask if it does exist, when and why does it emerge. Further, I learned that theory-based research is extremely important and that your statistical tools impact the kind of questions you can explore. Personally, I grew more and more passionate about the topic and learned to rely on the expertise of others.

What is your favorite part of creating, researching or developing this project?

One of the most valuable experiences in developing this project was two-fold: For one, it allowed me to reconnect with alumni of all ages from my German-American high school in Berlin. Receiving their support and hearing their interest in the project was extremely fulfilling and exciting. Second, by reaching out to various language professors on campus, I had the chance to be in conversation with different departments and voices, which really brought the topic to life in a multidimensional way. Whether discussing science policy with Lucia Cespedes, the Spanish TA, or hearing about Dr. Boetsch’s passion for interdisciplinary learning, I left more fulfilled and enlightened as a result.

What advice would you give to other students who are considering a thesis?

One thing another student emphasized to me during the process was welcoming, even craving, critical feedback. There is a desire to want to have all the answers when meeting with professors rather than admitting that you’re a beginner in the process. It is challenging to open your work to such vulnerability because you identify deeply with the product. By welcoming criticism, you are doing yourself and your final product a favor. Moreover, when else do you get the chance to pick the brains of brilliant experts who want to see you succeed?

As a senior, how did this project serve as a culmination of your time at W&L?

This project was an extraordinary way to translate my experiences growing up as a bilingual into a rigorous scientific study. With a deep interest in philosophy and language, I have always mused about the way in which language affects how we perceive and interact with the world. In that sense, it allowed me to intersect my passions for psychology, philosophy and language. In essence, neuroscience is an umbrella term for these very domains of study. Further, as I was working, I realized that as objective as scientific endeavors are cast, we always pursue questions of personal interest and significance. In that sense, we all have a perspective from somewhere. This became clear in the literature, where you find a very heated controversy about the veracity of the bilingual advantage. After all, bilingualism has extensive sociopolitical implications as it relates to education, immigration and feelings of identity.

A little more about Melina

Major:
Neuroscience with a Philosophy Minor

Why did you choose your major?
I chose neuroscience because the brain serves as the ideal platform to explore the human experience from a multidisciplinary perspective. Neuroscience, in particular, also encapsulates a diversity of fields.

What professor has inspired you?
Dr. Blythe, because she has been a phenomenal mentor, is willing to implement novel approaches in her classes, and has modeled being both a professional and a caring mother simultaneously. Finally, she also holds herself and others to the highest of standards.

What’s your personal motto?
This motto was adopted from someone I know, but is very meaningful to me: “Will and work for the good of others.”

What’s your favorite song right now?
Any Dermot Kennedy song: “After Rain,” “A Closeness,” “Glory,” and “An Evening I Will Not Forget”

Best place to eat in Lexington? What do you order?
Too many. Bistro’s beer bread may be my favorite, but that doesn’t quite count as a meal. Haywood’s Andouille Penne Pasta.

What do you wish you’d known before you came to campus?
Time is a valuable commodity on campus, but give it freely to yourself and others. Invest in others and relish the opportunity to learn from brilliant scholars.

Post-graduation plans:
I will be pursuing a Ph.D. in Educational Psychology at the University of Wisconsin-Madison.

Favorite W&L memory:
The time a friend from Berlin was visiting and we got stuck in the heaviest downpour during a typical Lexington summer thunderstorm and ran into Blue Sky absolutely dripping like we had stepped out of a shower.

Favorite class:
Once more, too many. But if I had to choose, then Prof. Verhage’s Phenomenology of Perception.

Favorite W&L event:
Science, Society, and the Arts – nerdy, I know, but it’s the epitome of a liberal arts education.

What’s your passion?
Sparking passion in others and discerning how what I learn can positively impact others.

What’s something people wouldn’t guess about you?
I acted in German TV movies as a child. Never rose to fame, fortunately — or unfortunately.

Why did you choose W&L?
One of the most compassionate people I had encountered was an alumnus of W&L who spoke of its commitment to integrity, community and character. Further, W&L was the most financially generous institution, and Admissions assured me that big city kids could also fall in love with the Blue Ridge Mountains – they weren’t lying.