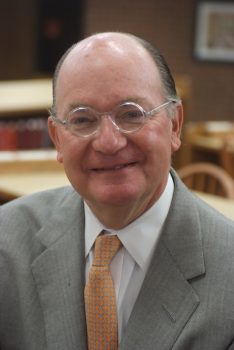 “My special friendship with Hagood began on my first day as a student in 1970; he was my dorm counselor,” said Beau Dudley ’74, ’79L, executive director of Alumni Engagement and trustee emeritus. “Hagood was smart, successful, optimistic, witty, generous, utterly devoted to his family and a talented trustee. He loved W&L, and he served the university with distinction and good cheer.”

Ellison entered W&L from Christ School, Arden, North Carolina, and graduated with a bachelor’s degree in political science. As an undergraduate, he was a dorm counselor, president of Pi Kappa Alpha, a representative to the Interfraternity Council and an employee at Alvin–Dennis. He was active in the ROTC and served as a first lieutenant in Key West, Florida, before earning his MBA at the University of South Carolina-Columbia.

Ellison joined Merrill Lynch as a financial advisor in its Columbia, South Carolina, office in 1976. His team, Ellison Kibler & Associates, was included on Barron’s 2014, 2015 and 2016 Top 1,200 Financial Advisors list, ranking him in the top 10 advisors in South Carolina. Barron’s also named him to its list of Top 1,000 Advisors every year since 2009, ranking him the number one financial advisor in the state in 2013. In 2016, Ellison was named to the Financial Times Top 400 Financial Advisors list.

As an alumnus, he was active in the Honor Our Past, Build Our Future and the For the Rising Generation capital campaigns. He was president of the Palmetto Alumni Chapter in Columbia and served on the Alumni Board from 1998 to 2002. He was a university trustee from 2004 to 2011 and a trusted member of the board’s Finance Committee. In addition, he was a member of the University Athletic Committee, the George Washington Society, his 35th and 40th class reunion committees and the Parents Leadership Council.

Over the years, Ellison generously supported a number of initiatives at W&L, including the Annual Fund, the Darnall W. Boyd Jr. Scholarship, the S. Cullum Owings Jr. Fellowship, Hillel House, the John M. Evans Endowment for International Studies and the Lee Chapel Project.

Ellison is survived by his wife, Eleanor “Cis” Ellison, and their children, Zan ’03, Adger and Andrew ’07.