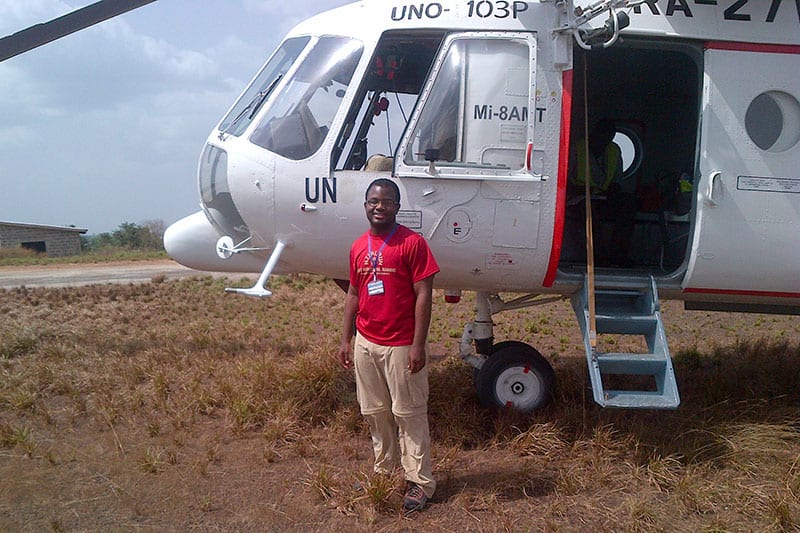 In January, Dr. Jonathan Wortham ’04 spent four weeks in Sierra Leone, one of several West African countries hit hard by the largest Ebola epidemic ever recorded. As a medical officer with the Outbreak Investigators Team at the Centers for Disease Control, in Atlanta, he provided epidemiologic assistance and support to the Ministry of Health and other international partners involved in the Ebola response.

One of his primary tasks was to improve Ebola surveillance–not just counting the number of cases but also collecting information helpful for determining the geographic distribution of cases and their demographic characteristics. “These data are essential for outbreak-response planning and targeting of resources,” he explained.

Jonathan, who completed his medical training and pediatrics residency at Baylor College of Medicine, joined the CDC in 2011 as an epidemic intelligence service (EIS) officer. He led several investigations into outbreaks of Legionnaires’ disease and published scientific papers documenting racial disparities in invasive pneumococcal disease (a serious bacterial infection common in young children and older adults) and recent antibiotic prescribing patterns for community-acquired pneumonia. He also designed a smartphone app to help clinicians improve implementation of preventive measures for Group B Streptococcus, the leading infectious cause of death for newborn infants less than 30 days old.

“While at W&L, I imagined that I would be a primary care physician,” he said. “That was my plan for a long time.” With that in mind, he took classes in two of the University’s signature programs, the Shepherd Program for Interdisciplinary Study of Poverty and Human Capability and the Washington Term Program, which introduced him to the complex intersection of health care, poverty and public policy. He spent his poverty internship at the Atlanta Mission, where he was “exposed to the poverty-related issues of mental health, drug abuse and homelessness.” His Washington term placed him in the late Sen. Ted Kennedy’s health office, where “I got a real, practical education in public policy. All careers are affected by policies made within the workplace or at local, state or national levels. Understanding how these decisions are made and how to successfully advocate is really important.”

Although Jonathan works full-time for the CDC, he hasn’t left patient care altogether. He holds a volunteer faculty position at Emory Medical School, in Atlanta, where one day a week he can be found at the Children’s Healthcare of Atlanta’s pediatric emergency department. Most days, however, “my work has to do with consulting with state and local health departments regarding tuberculosis (TB) control in the U.S. Occasionally, that can take the form of traveling to investigate outbreaks alongside state and local health partners.”

Because of his experience with TB, Jonathan was originally scheduled to travel to Kenya to work on managing the disease overseas. But that trip was put on hold, and he landed in Sierra Leone’s Kono District, a diamond-rich region located in the eastern part of the country, training new surveillance officers, analyzing surveillance data and teaching hospital staff about infection control and prevention procedures.

“The dedication of professionals from many different disciplines, including physicians, public health officials, police officers and military personnel was impressive,” he noted. “Many had not taken even a single day off from work in the previous nine months. I will never forget a brief discussion with an obstetrician at a local hospital, who has since become a friend. Despite the tremendous risk involved with caring for pregnant women with Ebola, as they are often very contagious, he told me, ‘Saving people and making their lives better is what I trained for and what I want to do. I will work my hardest as long as I am able.’ He articulated ideals for those working in public health and medicine and, through tremendous personal sacrifice, is exemplifying them on a daily basis. He was and is an inspiration to me.”

Although the number of Ebola cases leveled off at one point, there has been a recent spike in new infections. “This Ebola epidemic is the largest in history,” said Jonathan. “Unfortunately, I think we can expect to see a few rounds of setbacks before we get to the goal of zero new infections. Ending it will require working shoulder-to-shoulder with people like my obstetrician friend to stop transmission at its source.”

He’s not sure when he’ll get to Kenya, but he hopes to some day. No matter where his job at the CDC takes him, it is a perfect fit. “My goal has always been to use my scientific knowledge to improve lives. I get to do that every day, and I am very lucky to pursue this passion and get paid for it.”