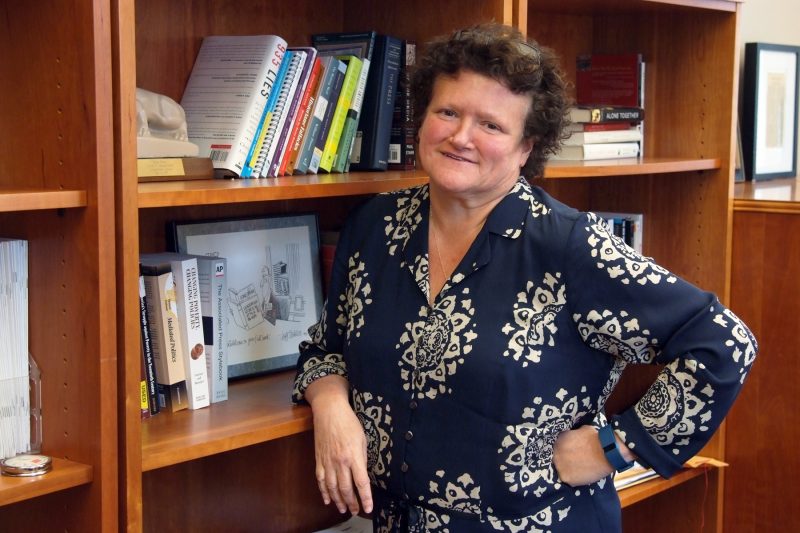 Books
“How Journalists Use Twitter: The Changing Landscape of U.S Newsrooms” (2016)
“Changing Focus: Kodak and the Battle to Save a Great American Company” (1996)
“Soap Opera: The Inside Story of Procter & Gamble” (1993)

Podcast
Listen to an in-depth interview with Alecia Swasy on her book, “How Journalists Use Twitter,” on the New Books Network.

Q: Your new book, “How Journalists Use Twitter,” is particularly pertinent this election. What is the main takeaway?

A: Social media is an amazing phenomenon that has changed how we do business in an era where anyone with an internet connection can become a publisher. It democratizes the news vs. the days when only the rich could build a printing press. But it’s also quite frightening. Look what it did to this presidential campaign. Trump hijacked the news cycle at 3 a.m. with his tweets, which journalists used to set the news agenda, rather than the normal, thoughtful discussion about what’s most important in all the other domestic and foreign issues of the day. It made the coverage of both Democrats and Republicans lopsided and lacking in depth about what’s really going on in most hometowns, which are a long way from D.C. or Manhattan. And now the pundits and pollsters are stunned by the outcome. There is anger among voters, who feel ignored in the national debate. In the aftermath, I hope there will be calm, peaceful reflection and conversations about where the line is. One of the things that angered me from day one, especially with TV news, was a basic question: What is news? Just because the circus comes to town doesn’t mean we need to cover the clowns every night. Yet that’s what it became. It’s exhausting.

“Twitter” evolved from a project I worked on while I was a Ph.D. student. During the 2012 presidential election, a group of us worked with four metro papers and asked readers to tweet to certain handles about the debates. We captured those tweets in real time for the papers to post on their websites and the next day’s papers. It was fascinating to me. I was never active on social media — I never had the time and much prefer to talk to people on the phone — but I realized that it was a force to be reckoned with. During one of the debates, NBC’s Tom Brokaw, the dean of broadcasting, came on after a commercial and apologized to viewers for using the term “schizophrenic” to refer to voters. He had been called out on Twitter. So what used to be a passive audience is now talking back to you. It would usually take days or the Sunday morning talk-show circuit to critique what Brokaw said. But here, instantaneously, he’d been called out and had to respond immediately. Twitter has changed not only what journalists cover, but how they disseminate that information.

Before Twitter, journalists used to do the best they could right up until the presses rolled. Now they are rolling all the time. What I’ve noticed is that millennials now view their career differently from when I started. I was always Alecia Swasy of the Wall Street Journal. They want to be Alecia Swasy Inc. They are creating and nurturing a brand so they can be more portable, because they don’t know if the news organization they are currently working for will be around in five years.

A: P&G got law enforcement and Cincinnati Bell to turn over millions of phone records of anyone who called me at the WSJ or home. It was a witch-hunt to find out who was talking to me. This was a chilling invasion of privacy way before the NSA made it an everyday event. Ed Artzt, the CEO, used the obscure Ohio trade secrets law, which is supposed to protect the secret formula to Tide or Crest, to get ahold of the phone numbers. He thought he could control the media. My stories, which were confirmed many times as accurate, detailed P&G’s failed food and beverage business. It ticked him off. It was “Shoot the messenger” and “You’re liars.” Because of him, I was the target of a police and phone investigation. I was followed and harassed by the company. It was an interesting time, and that experience became the last chapter of my book, “The Dark Side of the Moon.”

My brother subscribes to the Journal, so I knew I had to warn my elderly mother that I was about to be page-one news around the globe. I explained that P&G was playing hardball with me, but the Journal and Random House stood behind me. She slammed her coffee cup down on the table and said, “No more Tide in this house.” I told her she’d also have to dump her coffee, because “the best part of waking up is Folgers in your cup.” I still don’t buy any P&G products.

Q: Your next book, “Changing Focus,” was quite a different experience.

A: I switched gears for that book. At the end of every year, companies will fire thousands of people, their stock will go up by X number of dollars, and the Wall Street Journal will give them a couple of inches. I wanted to cover the story from the minute an employee got home and said, “Honey, I just lost my job.” I took a long time to troll around the Rust Belt to find my company and ended up at Kodak. At that time, the CEO was new, and he understood how to work with the media. He pretty much gave me free rein.

I spent about 2½ years in Rochester doing more than 300 interviews. It’s always nice, of course, to get a good book review in The New York Times, but for me it was hearing from the people who told me I found the right words to tell their stories. It’s difficult to be just an observer. Often, the couples I profiled would talk to each other through me. And that’s when you go, “Oh, boy, I’m not a trained counselor.” You say a little prayer and hope for wisdom and let them talk. I’m always amazed by how much people will tell you. They told me about their financial situation, their love life, their children, their heartache. You want to do them justice. What ticks me off is when critics try to portray journalists as running roughshod over everything. If they only knew how much we sweat the details. Anyone who has come to an editorial meeting at the WSJ, or any number of papers, comes away going, “Wow, I had no idea there was such debate.” We care. We care so much.

Q: Are you hopeful for the future of journalism?

A: I had someone ask me, given everything that is going on, how do you get up in the morning? My answer: with great exuberance, because I get to teach journalism at a time when now, more than ever, it is essential for our democracy. We must train the next generation how to do it right. I take great pride in that because I am an optimist and the truth will prevail. It’s invigorating to get to teach. I love it.

Changes have been seismic in journalism. There is a fantastic opportunity with the explosion of smartphones and social media and the democratization of the news, where we now can get pictures and news where we no longer have boots on the ground. At the same time, you have this deluge of bad information. That has some serious ripple effects in terms of telling the truth and getting out the message.

Any time I meet a parent who has indigestion about their son or daughter going into journalism, I say, “Wow — I don’t think news is going away, do you? Politics is never going to be tame. And how about Wall Street, and let’s talk about Hollywood and the NFL.” And then they start smiling. Journalism’s business model, the traditional one, is antiquated, and we have to figure out ways to continue to do the investigative journalism, keep the lights on and also try to serve up the whole buffet of information people want. I do not ever want us to become a Kardashian kind of culture, where it’s the lowest common denominator of information. It’s OK to give people entertainment news, but for God’s sake, we’ve got to teach them what is going on in the world.

Q: You’ve got an interesting Spring Term class in 2017. Where are you and your students going?

A: My class is Media Management and Entrepreneurship. I’ve got the Charlotte Observer to partner with me and 12 students, and we are going to parachute in there for a few days and break into teams. Each team is going to come up with a product or a strategy on how to increase millennial traffic to the Observer’s website. It’s a dynamic market with two competing millennial publications in that city already, Charlotte 5 and the Charlotte Agenda. Figuring out how to increase readership is the elusive hunt that has been going on forever.

Q: What’s your next project?

A: I’m going back to an old favorite, which will take me back to a small town in West Virginia. I wrote a couple of stories about 20 years ago on single moms in the Appalachian region, and I’ve been haunted by them. It’s one of those times where I feel a responsibility as a journalist to tell the haves about the have-nots. In America, there is an increasingly big gulf between the two. Everybody should care about that. I know so many people who are one illness away from financial disaster. It is scary.