A Dream Job and a Landmark Case As the Secular Society Women’s Rights Legal Fellow for the ACLU of Virginia, Deady '11L works on issues related to gender equality, reproductive rights and LGBT discrimination. 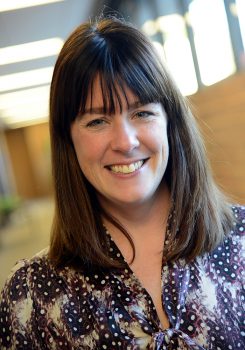 Gail Deady ‘11L came to law school to fight for civil liberties and gender equality. Little did she know that five years after graduation one of her cases would be heading to the U.S. Supreme Court.

Deady, a legal fellow at the ACLU of Virginia, is one of the attorneys representing Gavin Grimm, the Virginia high school student at the center of a dispute over bathrooms and transgender rights. The High Court added the case to its docket in October, and it is likely to be one of the most anticipated decisions of the current term.

While in law school, Deady pursued practice experiences that allowed her to advocate for issues affecting women. She interned with Rappahannock Legal Aid her 1L summer and spent her 2L summer and an externship during her 3L year with the Central Virginia Legal Society, handling a range of family law and domestic abuses matters.

Beyond affirming her commitment fighting for women’s issues, these placements gave Deady a great deal of real-world experience.

“I was allowed to represent clients in hearings and get a lot of courtroom exposure,” says Deady. “I realized I really liked litigation and wanted to do that after graduation.”

However, like most of her classmates graduating at the height of the legal recession, Deady had trouble finding opportunities for legal aid fellowships or post grad clerkships. Luckily, her small section professor from her first year was able to connect Deady with a former student at a midsize firm in Richmond, which ultimately led to a job offer with the litigation group at the firm, McCandlish Holton.

In all, Deady spend three and half years at the firm doing mostly tort defense, starting with small scale bench trials in district court, and moving up to bigger cases in federal court after she proved herself. She also kept up an active pro bono practice focused on women’s rights law, and when an opportunity to join the ACLU of Virginia opened up in early 2015, she jumped at the offer.

“To do women’s rights work for the ACLU was like a dream come true,” says Deady.

As the Secular Society Women’s Rights Legal Fellow, Deady works on issues related to gender equality, reproductive rights and LGBT discrimination. In addition to case work, Deady lobbies for legislative change, and is also authoring a white paper exploring why the fastest growing prison population in Virginia and the nation is women.

The headline-making Grimm case was waiting on Deady’s desk the day she started her new job.

“At the time, I don’t think anyone realized how far the case would go,” says Deady, whose role in the case in similar to that of a second chair at trial. She does most of the work on the ground in Virginia, gathering information and helping draft briefs for the hearings in federal court. Oral arguments are handled by litigators in the ACLU’s New York office, most notably Joshua Block, who is a senior staff attorney at the ACLU Lesbian, Gay, Bisexual, and Transgender Project.

In December of 2014, the school board of Gloucester County adopted a bathroom policy requiring students use bathrooms corresponding with their biological sex. A motion for preliminary injunction filed by the ACLU was denied in district court, but that decision was overturned in August of 2016 following a hearing by the U.S. Court of Appeals for the Fourth Circuit. Deady had just begun the discovery process when the U.S. Supreme Court decided to take the case following a petition from the school board. Oral argument will take place in spring 2017.

“It’s really been a crash course in appellate practice and procedure for me,” says Deady, noting the speed with which the case has moved through the judicial system. “For a case to advance this far in less than two years and to be able to experience all those stages in pretty unique.”

Deady says working with the seasoned attorneys from the ACLU as they prepared for argument in the Fourth Circuit was a great learning experience and helped tremendously as she prepared for oral argument in another case before the Virginia Supreme Court earlier this year.

In Luttrell v. Cucco, Deady represented an ex-husband who was suing to have his spousal support agreement modified since his ex-wife was cohabitating with someone, in this case, another woman. A circuit court had concluded that only opposite-sex couples can cohabit in a relationship analogous to marriage, as determined by Virginia statute, and so Mr. Luttrell had no grounds to change the support agreement.

“It was actually a pretty typical ACLU case,” says Deady. “We weren’t representing the group that is most often discriminated against, but we were pointing out the inequality of the situation.”

Deady won the case with a 7-0 decision.

Deady’s ACLU fellowship will last three years, after which she hopes to continue working on women’s rights and LGBT issues.

“It is humbling and such a privilege to be able to do this kind of work,” she says. “You get to do something that makes a real difference in people’s lives, and that’s not something every lawyer gets to experience.”