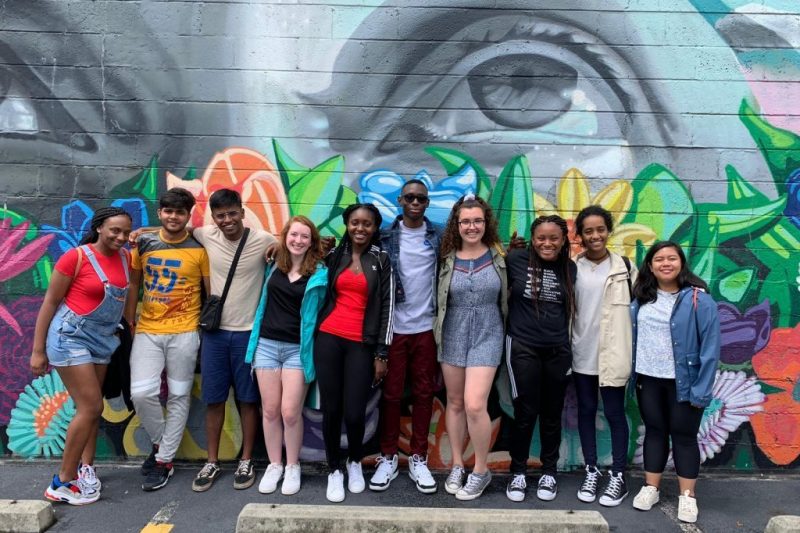 “As we face the daunting task of suturing our nation and our campus into a coherent collective, we would do well to study intently earlier moments where these kinds of challenges existed.”

The Leading Edge at Washington and Lee is a week-long pre-orientation program that takes place a week before regular orientation. It allows first-year students to engage in activities that include backpacking through the Appalachian Mountains, doing community service in neighborhoods experiencing poverty, and exploring archaeological sites in Lexington. Regardless of which program students choose, they always return to campus invigorated and prepared for an incredible first-year experience.

Over the years, the Leading Edge program has grown to include four tracks: Volunteer Venture, which focuses on community service; Sustainability, an examination of conservation issues; Archeology; and Appalachian Adventure, an Outing Club-sponsored option. This year’s program saw a new trip focused on the civil rights movement, as well as continued growth of Appalachian Adventure, the most popular program.

The Freedom Ride trip took students on a tour of five different cities in the Southeast: Farmville, Virginia; Atlanta, Monroe and Athens, Georgia; and Greensboro, North Carolina. At each stop, students visited sites that were crucial during the civil rights movement and examined how those areas have been shaped by the injustices of the Jim Crow era. Those sites included the Moore’s Ford Lynching Site near Monroe and the International Civil Rights Museum in Greensboro. The group also visited the Sweet Auburn Neighborhood and the National Center for Civil and Human Rights, both located in Atlanta.

This program was created by Tammy Futrell, dean for diversity, inclusion and student engagement; Tammi Simpson, associate dean of students and dean of seniors; and Michael Hill, professor of Africana Studies. They were inspired by a Spring Term course taught by Professor of History Emeritus Ted Delaney. 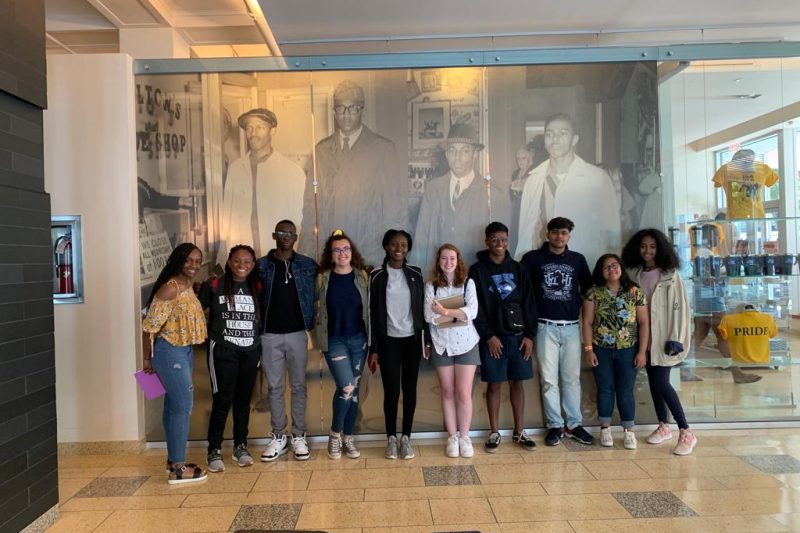 The goal of the new trip was to expose students to a wide range of social institutions, exploring both well-known and more obscure historical episodes in order to cast the civil rights movement as a primer for 21st-century community building. “As we face the daunting task of suturing our nation and our campus into a coherent collective, we would do well to study intently earlier moments where these kinds of challenges existed,” Hill said.

“It was a phenomenal educational journey for us all,” Simpson said.

Estrella Burks-Parra ’23 said she is grateful for the friendships she made on the trip, as well as the sense of awareness it fostered.

“Freedom Ride was one of the most influential, eye-opening experiences of my life. I learned more about the civil rights movement in five days than I could have possibly imagined and came face-to-face with how little I truly knew about our history’s recent past,” she said. “This trip truly helped me shape the way I view memorials of the past as well as question and search for more narratives than what appears to be clear on the surface.”

“The first year unfolded magnificently,” Hill said. “Because Washington and Lee students are wonderfully curious, each spot that we visited sparked profound conversations. Several individuals who interacted with our group noted this robust intellectual engagement. While onlookers admired the cohort’s scholarly acumen, I enjoyed watching them bond socially. They began the sojourn as individuals bound by a momentous, yet underdeveloped chord. By the end, they were a fellowship. Such communion lights the way to a brighter future for our campus.”

Appalachian Adventure, organized by W&L’s Director of Outdoor Education James Dick, remains the most popular Leading Edge trip. Students, in groups of 10 to 12, spend one week backpacking through the beautiful mountains of Virginia, learning leadership skills and making new friends. This year saw App Adventure’s largest group of participants: there were 20 trips, 60 trip leaders and about 140 first- year students.

Last year, the program added an Appalachian Adventure trip to Natural Bridge, Virginia, and it was so well-received that a second group visited Natural Bridge this year. There, they camped out at the site and engaged in community service in the area. This year, another new stop—in Shenandoah National Park—was added to one of the backpacking trips. 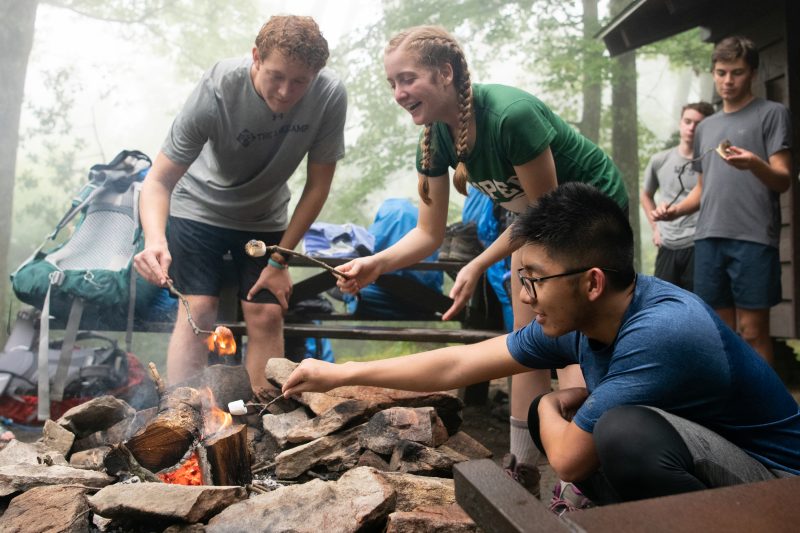 Julian Ramirez ’21 makes s’mores with an Appalachian Adventure group at their shelter on the AT.

Dick explained that, aside from creating an amazing experience for new students, one of his goals with Appalachian Adventure is to give upperclassmen a great leadership experience. Each App Adventure trip has three upperclassmen leaders for seven to nine first-year students.

“Giving younger people a chance to lead is crucial,” Dick said. Trip leaders are responsible for the first-year students for the week that they spend out in the wilderness, and those seven days have proved year after year to be transformational and educational. “Everyone comes from different parts of campus, and they end up being genuinely involved with the program,” he said.

The application and training process to become an App Adventure trip leader has become quite competitive over the years. Aspiring trip leaders are required to take PE 180: Wilderness Leadership, to be active within the Outing Club, and to obtain a recommendation from their own trip leaders. With upwards of 75 students applying and about 60 making the cut, students have to work hard to earn a spot on the leadership team.

Visit the Leading Edge webpage to learn more about all of the pre-orientation trips. 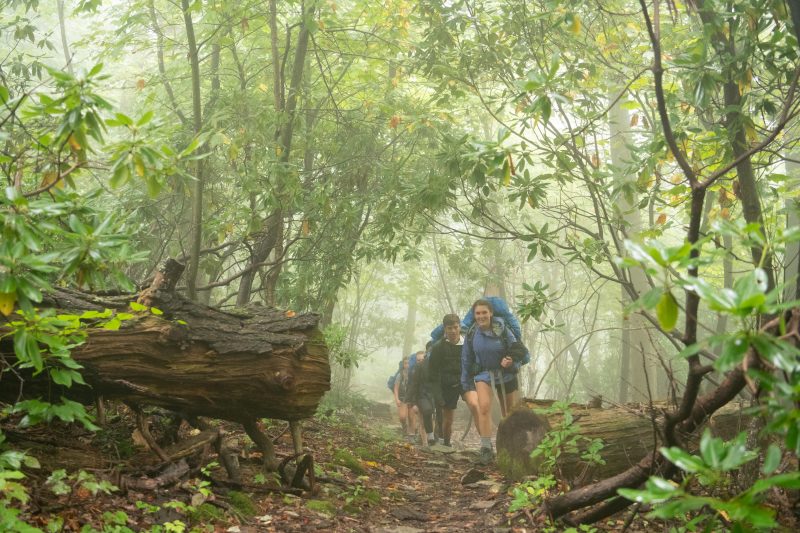 Elizabeth Grist ’22 leads an Appalachian Adventure group to their shelter on the AT.
Related //Africana Studies, The College
Tagged //DEI