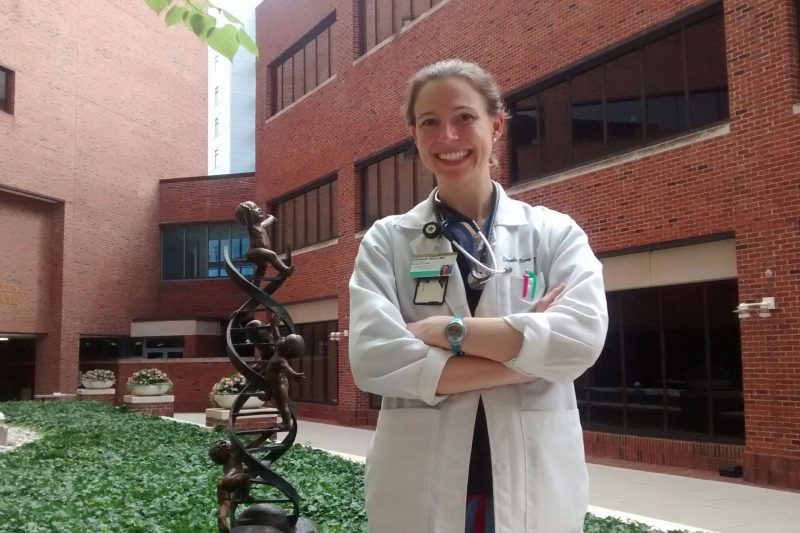 A tragedy set the course for Liz Webb Berry’s career.

The 2009 Washington and Lee valedictorian is finishing her first year of residency at Vanderbilt University Medical School, after obtaining an M.D. degree there in 2014. She and husband Vance Berry ’09, will then move to Atlanta, where Berry will spend the next three years as a resident in dermatology at Emory University Medical Center.

As a child, Berry was extraordinarily close to her mother, a part-time emergency medical technician, whom she describes as “a born healer.” While Berry doesn’t know how her life might have turned out in the absence of tragedy, it was the death of her mother from melanoma when she was 13 that made her dedicate her life to treating people with the deadly form of skin cancer.

“I think about her every day,” said Berry. As she has matured and earned the M.D. after her name, she says she has “a unique perspective as a doctor, having understood and cared for a person and not a disease.”

Berry’s quest to become a dermatologist began in earnest in 2008 when she served as an intern in melanoma research at the University of Colorado Cancer Center. Berry grew up in Colorado before her family moved to Virginia in 1998, and while at the center, she met the doctor who first diagnosed her mother with melanoma, Dr. William Robinson. A few years later, that connection would be instrumental at another turning point in her life.

Berry knew she wanted to be a dermatologist, and during her senior year at W&L, she decided to pursue a Fulbright Scholarship to conduct research with leaders in the melanoma field in Brisbane, Australia.

Dr. Robinson had been a Fulbright Scholar and helped her make connections to researchers studying human pigmentation genetics. After corresponding with them, she formulated her project proposal with the help of George Bent, Sidney Gause Childress Professor in the Arts, who served as W&L’s Fulbright advisor.

Erich Uffelman, Bentley Professor of Chemistry, read and helped her revise the proposal, and then-Provost June Aprille signed off on it. After a long wait, Berry came back to her dorm one evening after a track meet to get ready to attend that evening’s Fancy Dress Ball. Between her “sweaty track clothes” and donning formal attire, she received word that she had received a Fulbright.

The rest of the semester and the following summer were busy – graduation from W&L, followed by a wedding in July and the move with her new husband to Australia.

There was more good news, however. Berry learned that she had received an NCAA Postgraduate Scholarship to help pay her medical school tuition.

An award-winning runner for W&L’s track and cross country team, Berry said her track career was “serendipitous.” She said she wasn’t very good at high school track; however, Kris Hoey, W&L’s coach at that time, wanted her on the W&L team. “Under her coaching, I thrived,” said Berry. “I dropped nearly 4 ½ minutes from my 5K time. I competed at a national level. It was an incredible experience.”

In Brisbane, Berry worked with three leading researchers, Dr. Adele Green, the scientist who first proved that sunscreen use decreases the likelihood of developing skin cancer; Dr. Rick Sturm, a prominent human pigmentation geneticist; and Dr. Peter Soyer, a dermatologist who is pioneering digital imaging. In addition to conducting research, Berry met with patients to photograph their moles and collect saliva samples. The photographs, along with DNA extracted from their saliva, helped the team understand the genetic underpinnings that might put a person at risk for skin cancer.

After 10 months in Australia, she returned to the states to enroll at Vanderbilt Medical School. “I adore Nashville. There was a similar feel to W&L in my medical school class,” she said, citing the supportive, nurturing environment.

When her four-year residency is completed and she passes an exam to be board certified in dermatology, Berry hopes to become associated with an academic medical center, so she can teach as well as treat patients. She is also looking for a framework to provide care to people who can’t afford health care or don’t have access to a dermatologist. “I want to provide compassionate, comprehensive care to those who otherwise would not have access,” she said.

Berry recently traveled back to her high school in The Plains, Va., to give the graduation speech. She spoke about leadership and communication, things she learned at W&L. As a student leader on the track team, she participated in several workshops conducted by Burr Datz, then-director of leadership development and coordinator of religious life. Those experiences taught her that the two most important things a leader can say are “I need help” and “How can I help you?”

“I have taken these lessons through medicine,” she said. “Clear communication in a non-threatening environment is essential for patient care.”

As Berry remembers the concern for others she saw in her mother’s eyes, she aspires to use the skills she learned at W&L and in Australia and medical school to be the same type of healer and comforter that she saw exemplified in her mother.