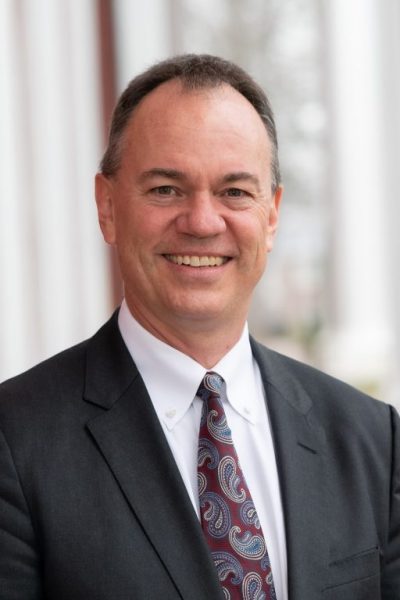 Marc Conner, provost and Jo M. and James M. Ballengee Professor of English at Washington and Lee University, has been named president of Skidmore College in Saratoga Springs, New York. He will begin his new role on July 1, 2020.

W&L President William C. Dudley said Conner will remain in his current position through the current academic year. The process for hiring his replacement will be announced this winter.

“Marc’s combination of deep institutional knowledge, extensive administrative experience, and outstanding academic credentials have made him a remarkable provost, and form a strong foundation for a college presidency,” said Dudley. “He has given W&L 23 years of extraordinary service and been a trusted partner for me during my first three years as president. He is highly deserving and well-prepared for this role, and will make an exceptional leader for Skidmore College. I am grateful for his leadership at W&L, congratulate Skidmore on an excellent choice, and look forward to seeing what Marc will accomplish in this new endeavor.”

Conner came to W&L in 1996 as an assistant professor in English, with specializations in American and African-American literature. He created a Spring Term Abroad program to Ireland in 2000, which he has now taught nine times, and which led to the creation of several courses in Modern Irish literature. He has published extensively in modern American, African-American and Irish literature, including dozens of essays and six books: “The Aesthetic Dimensions of Toni Morrison” (2000), “Charles Johnson: The Novelist as Philosopher” (2007), “The Poetry of James Joyce Reconsidered” (2012), “The New Territory: Ralph Ellison and the Twenty-First Century” (2016), “Screening Modern Irish Fiction and Drama” (2017), and the just-released “The Selected Letters of Ralph Ellison.” In addition, Conner has created two lecture series for The Great Courses: “How to Read and Understand Shakespeare” (2012) and “The Irish Identity: Independence, History, and Literature” (2016), and he is currently completing a third, titled “Touring Ireland and Northern Ireland.” He is a co-founder of the Ralph Ellison literary society and the Charles Johnson literary society and has organized numerous international symposia on Ellison.

In 2007 Conner co-founded Washington and Lee’s program in African-American Studies, which has since grown into the program in Africana Studies. He served as the program’s director from 2007-2012. He served as chair of the English Department in 2012-13. In 2010, as part of Washington and Lee’s reaccreditation process, he led the Spring Term revitalization effort, and served as director of the Spring Term for five years, guiding the university’s Quality Enhancement Plan to a successful conclusion. He has served as a faculty representative to the Board of Trustees and on many university committees, including the President’s Advisory Committee, the International Education Committee, and the Spring Term Coordinating Committee. He served as associate provost from 2013-2015, and was named provost on January 1, 2016.

In addition to his work in African-American studies, Conner has been a longtime advocate of diversity initiatives at Washington and Lee, serving as a member of the Martin Luther King Jr. Celebration Planning Committee and as co-chair of the University Committee on Inclusiveness and Campus Climate. He served as co-director of the Advanced Research Cohort Program, an immersive summer program for incoming first-year students that seeks to increase retention of underrepresented students in STEM fields through an early research experience. The program has since expanded into other areas of study as the Advanced Immersion and Mentoring program.

Conner has also been active in the local community, serving for six years as a RARO youth basketball coach and for nearly 20 years as a religious education instructor at St. Patrick’s Catholic Church. He served on the board of the Yellow Brick Road Early Learning Center and currently serves on the board of the American Shakespeare Center.  He is very active in the martial arts and holds a fourth-degree black belt in American Freestyle Karate and a second-degree black belt in Shotokan Karate. He and his wife Barbara have raised three sons in Lexington.

“This is a tremendous opportunity, and I’m honored to be selected as the next president of Skidmore,” said Conner. “It’s a very special place ─ a great liberal arts college with a special emphasis on creativity and the arts that I will eagerly embrace. But, of course, it’s extremely difficult to leave W&L. I’ve been here for almost 24 years, and this institution has supported me in everything I’ve wanted to do. I’ll miss the students, the staff, the faculty and the entire community. I’m very proud to have been so long associated with this great university.”

More information about Conner’s appointment is available on the Skidmore College website.

Related //The College, The Williams School
Tagged //Office of the Provost
Loading Comments...