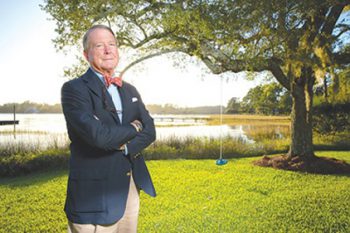 Henry Hawthorne, who has spent the last 40 years improving the quality of life for children across the Wilmington, North Carolina, region, will receive a Lifetime Achievement Award from Healthcare Heroes on Nov. 12.

“The gift of teaching other physicians is a gift that is held at higher level by his peers,” wrote physician James McCabe in his nomination letter for Henry, who graduated from Washington and Lee University in 1962. “He shared his knowledge and bedside skills with many physicians. He was a mentor, coach, advocate, friend and teacher for many physicians. This had a rippling impact for the greater good of our medical community.”

Henry Temple, president of the New Hanover-Pender County Medical Society wrote: “I can recall many a night during the wee hours of the morning when we co-waited for the birth of a baby in a problematic pregnancy. He was always the picture of calm, caring, competent and confident kindness. He was truly a hero as a physician. Not only has he been a hero by his practice of medicine. He also is a hero as one of the guiding leaders of the medical community.”

Henry initially thought he would be an orthopedic surgeon, but discovered his gift for pediatrics at the University of Virginia Medical School. He said in a profile with the WilmingtonBiz. “[I] love children and love dealing with anxious mothers and daddies. I think love of children is the most important thing. I can tell you lots of people wonder how you can do it, but I loved every minute that I practiced. I mean it was so much fun. I feel sorry for someone who doesn’t like what they are doing. I loved what I did.”

Henry retired from Wilmington health in 2011, but failed at the concept and began consulting a few days a week. That soon morphed into the role of associate medical director at Community Care of North Carolina.

As well as working part time, Henry is restoring a couple of British sports cars, fishing as often as he can and volunteering at a medical clinic in Leogane, Haiti.

Read more about Henry’s career and excerpts from his nomination letters here.