Mission to Monterrey Daniel Rhoades '19 joined a group that traveled to Monterrey, Mexico over Washington Break to continue a STEM program for elementary school students.

“…talking about a country and its language in a classroom doesn’t compare to walking the streets of that country and hearing its language being spoken. It is incredibly special to get a glimpse of what life really looks like elsewhere in the globe and to cross a border which, especially in today’s political climate, is too often strengthened.” 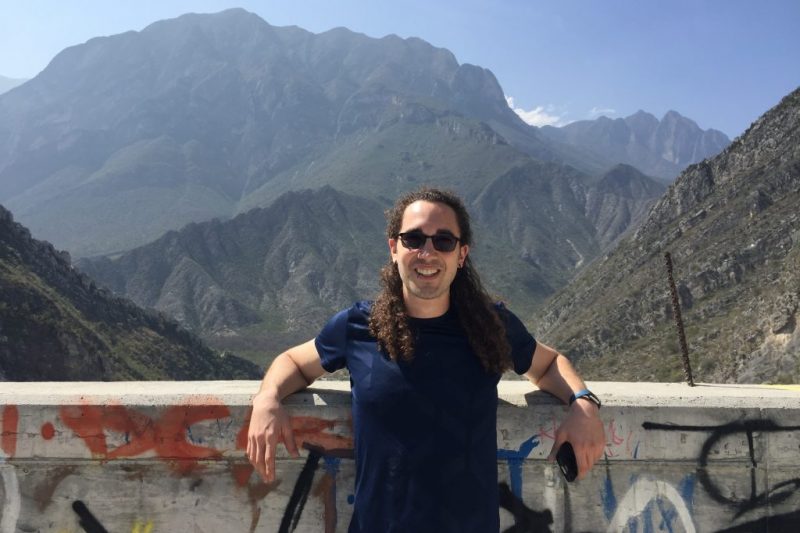 Daniel Rhoades ’19 poses on top of the Rompepicos dam in an area called Parque la Huasteca just outside of Monterrey.

During summer 2017, Angel Vela de la Garza Evia ’18 used a Davis Projects for Peace grant to implement a program for public school students in his hometown of Monterrey, Mexico. Dubbed “STEMito,” the project included experiments and activities to introduce the children to science, technology, engineering and math. It also included some school improvement projects.

During Washington Break this year, Vela de la Garza Evia returned to Monterrey with W&L associate professor Jon Erickson and several classmates to continue the STEMito program. We asked Daniel Rhoades ’19 to describe the week’s activities and their impact on him.

How did you end up going to Monterrey?

I was in a class (PHYS 295: Applications of Physics to Social Science) with Matthew Lubas, one of the trip coordinators, in fall 2017. I heard about STEMito both from him and via e-mail. It piqued my interest because I was excited to have the opportunity to support childrens’ STEM education while practicing my Spanish language skills. I was originally not slated to attend, but the week before the trip, someone decided not to go. I was on the wait list and was offered the open slot. The rest of the group was made up of physics professor Jon Erickson, Angel Vela de la Garza Evia ’18, Matthew Lubas ’18, Ryder Babik ’19, Abigail Hinrichs ’20, Anna Soroka ’20, Anne Rodgers ’20 and Katarina Martin ’20.

What was the purpose of this latest trip down there?

The purpose was to help support Angel in continuing the STEMito project. Last summer he was awarded the Davis Projects for Peace Grant to develop STEMito, a STEM-related project for primary school students in Monterrey. In his words, “The goal of STEMito is to expose students at the primary level to a wide variety of STEM topics in a way that they have never experienced them before.” The trip involved getting to know students outside the classroom, helping with a few construction projects around the school (e.g. rebuilding and painting their garden fence and painting the front of the stage used for student performances), and preparing for, as well as conducting, STEM-related experiments with 4th, 5th, and 6th grade students in the afternoon.

What specific activities were you involved in?

I was involved in each of the activities listed above (except for painting the stage). Getting to know the students involved sitting with them during lunch and their breaks between classes, asking them questions about their lives, answering their questions about mine, and playing a lot of soccer and basketball.

Regarding construction around the school, I worked mostly with repairing and repainting the school’s garden. Both the construction and experiment preparation also involved shopping for supplies around town. I worked with Professor Erickson, Anne and Ryder to conduct experiments with the 5th grade class in the afternoon. Our experiments included:

Human anatomy (Mano Articulada_ — tracing hands on foam paper, cutting up straws to act as bones, and feeding string through the straw sections attached to the foam hand in such a way that when the strings (tendons) are pulled, the foam fingers bend similarly to our own hands

The impact of soap on grease/fat (Leche Bailante) — filling a plate with whole milk, placing some drops of food coloring in the center, and dropping some soap in the middle of the food coloring. The food coloring spreads out, and you can observe the milk fleeing from the soap due to the lipids (fats) in the milk.

What was your favorite part of the trip?

My favorite aspect, hands down, was getting to know the students. Hearing their thoughts, interests and aspirations, and answering any questions they had about my life, was a beautiful example of two people from very different backgrounds getting to know each other, learning about each other’s cultures, and discovering that beneath it all, we have a lot in common.

How did the trip enrich your educational experience at W&L so far?

Washington and Lee talks about the value of global citizenship and learning about different cultures, but talking about a country and its language in a classroom doesn’t compare to walking the streets of that country and hearing its language being spoken. It is incredibly special to get a glimpse of what life really looks like elsewhere in the globe and to cross a border which, especially in today’s political climate, is too often strengthened. Rather than alienating those I don’t know, I was again encouraged to connect with people who come from different backgrounds while remembering to respect their individual identity.