New Book Covers 70 Years of the W&L Story Historian Blaine Brownell ’65, who spent his career as a college professor, administrator and consultant, has completed a 608-page history of W&L, from 1930 to 2000. 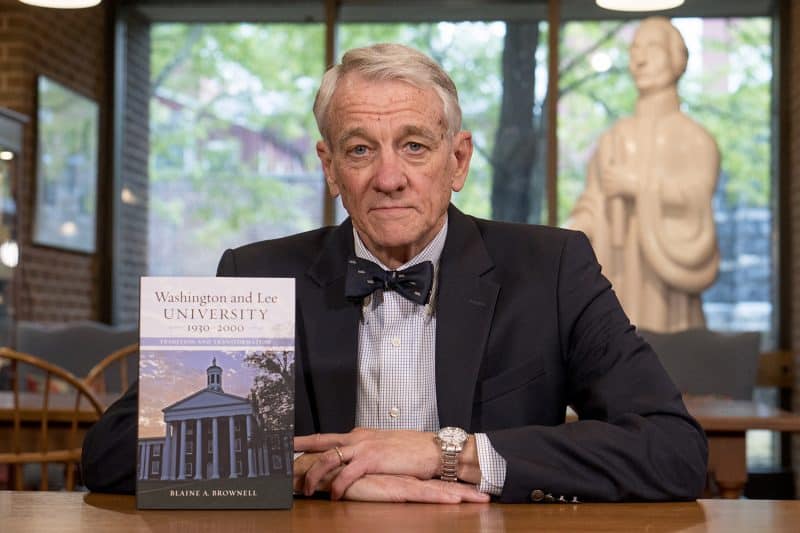 Blaine Brownell earned a degree in history from Washington and Lee in 1965, so he must have experienced a sense of déjà vu when, decades later, he found himself hunched over books and papers in the school library. This time, however, the circumstances had changed. For one thing, the university was paying him, not the other way around.

The 70-year slice of W&L’s 268-year history is available in hardcover at online and brick-and-mortar retailers, including the University Bookstore. It was published by LSU Press, and funded by a generous gift from the W&L Class of 1966 on the occasion of their 50th reunion.

Brownell’s book covers a challenging period for American higher education, as it includes the Great Depression, World War II, shifting patterns of funding, the Vietnam War, and social and cultural revolutions. Washington and Lee also weathered its own storms between 1930 and 2000, such as the athletic cheating scandal of 1954 and the debate over coeducation in the 1980s.

Brownell decided to approach the history from the perspective of the institution’s presidents because the university is “embraced in their perspective.” He focused on the four “very well-qualified, very engaged” presidents who served between 1930 and 1995: Francis P. Gaines, Fred C. Cole, Robert E.R. Huntley ’50, ’57L, and John Wilson. (John Elrod’s presidency extended beyond 2000, so his term awaits a future historian.) In addition to presidents, Brownell strove to include as many influential players as possible, whether they were trustees, administrators, coaches, alumni, professors, student leaders or donors.

Brownell, who lives near Charlottesville, found most of the primary source materials for his book in W&L’s Special Collections & Archives, where he grew so close to the staff that he refers to them as “extended family.” His wife, Mardi, was his research assistant and copier-in-chief.

“When I started, I didn’t know what was there or how much,” he said. “If I was teaching [at W&L] now, I would have a whole slew of projects that I could recommend to students because of things I know that I just didn’t have a chance to follow up on.”

For example, he said, he didn’t have time to chase down details about important national documents that were hidden at W&L during WWII to keep them safe. He also would have enjoyed fleshing out the history of the Law School, spending more time on the work of individual faculty members, and telling stories about noteworthy people who visited the university.

It was a no-brainer to include the word “tradition” in the title of any book about W&L, but it became just as important to draw out the stories of transformation, he said. If the university had not adapted to the changing world, it could never have sustained its traditions.

“Frank Gilliam used to say to alumni who were distressed with almost any change they saw on campus, that if this university had not changed since you had been here, you wouldn’t be proud of it,” he said, referring to the late dean of students.

By the time Brownell embarked on the book project, he had spent 45 years away from Washington and Lee, earning an M.A. and a Ph.D from the University of North Carolina at Chapel Hill, then serving as professor, senior administrator and academic consultant at a number of universities. Having completed the W&L history, he said he feels closer to his alma mater than ever before.

“I certainly have a much more in-depth appreciation for the university and the challenges it has faced.”

Click here to watch a lecture about W&L history delivered by Brownell at Washington and Lee in early November 2017.

Click “play” below to watch Blaine Brownell talk more about Special Collections & Archives, and the Class of 1966’s role in preserving W&L’s history.