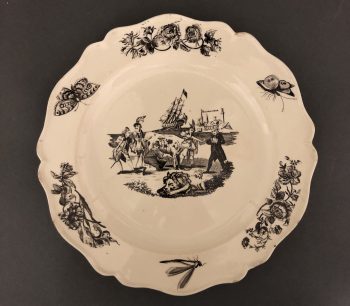 Pieces like this found a ready market among American supporters in England, allowing them to show their displeasure with the war to their dinner guests and drinking companions.

Political cartoons are nothing new. Critics have used imagery and humor for centuries, if not longer, as a way of commenting on the political, social and economic issues of their times. That is what is happening on this plate, which is decorated with one of the most widely distributed political cartoons of the American Revolution.

Titled “A Picturesque View of the State of the Nation for February 1778,” the anonymous cartoon is a critique of the poor performance made by British forces and a damning report of the damage that the American war for independence is having on British trade. In the background, a beached warship lies by the British-controlled port of Philadelphia. In front of the city sit Admiral Richard Howe and his brother General Richard Howe, slumped in a drunken stupor over a punch bowl, reflecting the popular perception in Britain of their failure to bring the rebellious colonists to heel.

In the foreground is an allegory of the economic damage the American Revolution is wreaking on Britain. British trade is represented by a cow whose horns are being cut off by a Native American (representing the rebellious colonists). The cow is being milked by a stereotypically dressed Dutchman, while an equally stereotypical Spaniard and Frenchman wait their turn. A British merchant wrings his hands in distress while, to add insult to injury, a French pug urinates on the back of a sleeping British lion (an old symbol of Britain’s pride and might). 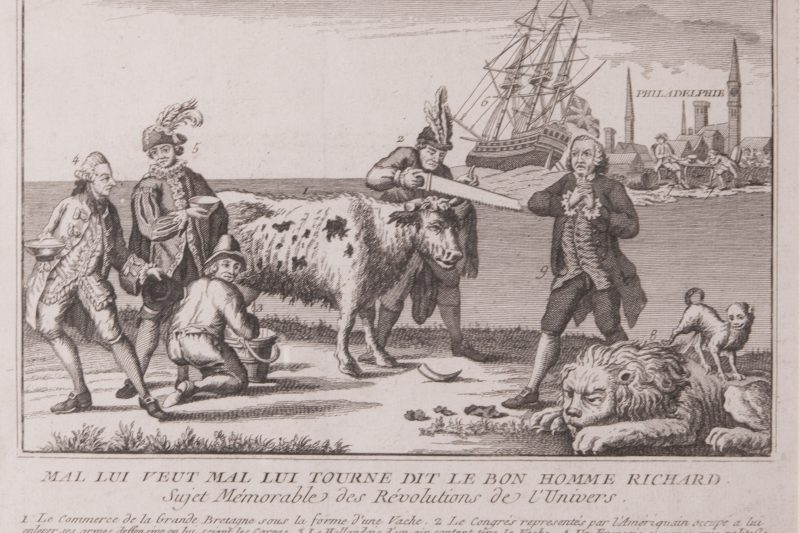 America had been one of Britain’s biggest export markets, and its loss had a devastating effect on British merchants and manufacturers. France, the Netherlands and Spain were quick to take advantage of the opportunity to expand their own trade with America, and to score political points against an old rival. In fact, France and the United States had signed a Treaty of Amity and Commerce and a Treaty of Alliance on February 6 (thought the British would not learn of it until early March), and Spain and the Netherlands later joined the fight against Britain.

“A Picturesque View of the State of the Nation” was first published in the Westminster Magazine on March 1, 1778. It clearly struck a chord and was quickly republished in Britain as well as in the Netherlands and France. The French version was titled “MAL LUI VEUT LUI TOURNE DIT LE BON HOMME RICHARD,” which refers to Benjamin Franklin, the American ambassador to France, who published “Poor Richard’s Almanac.” 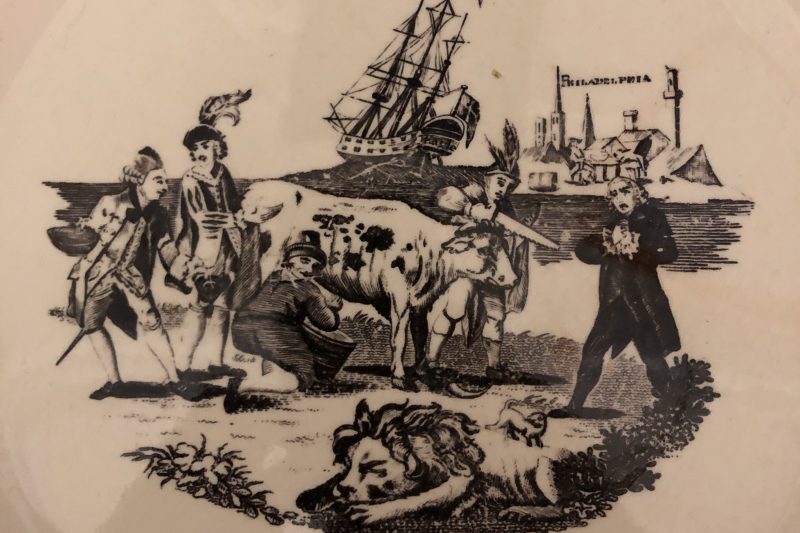 This plate featuring a widely distributed political cartoon of the American Revolution was probably made in Staffordshire and printed in Liverpool, England, 1778-1780.

An enterprising English potter (many of whom were suffering from the loss of their American markets) copied the image onto jugs and plates. Such pieces found a ready market among American supporters in England, allowing them to show their displeasure with the war to their dinner guests and drinking companions. Some pieces even seem to have evaded British blockades to reach the rebellious colonies; fragments of one plate was excavated at  Rocketts Landing in Richmond, and another, somewhat appropriately, from what is now the site of the National Constitutional Center in Philadelphia.