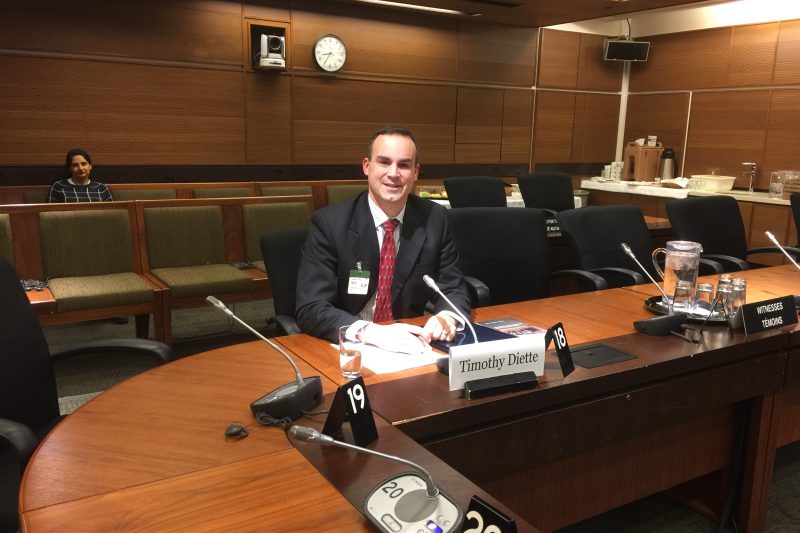 Timothy Diette
Harry E. and Mary Jayne W. Redenbaugh Term Associate Professor of Economics, acting head of the Economics Department, faculty member of the Africana Studies Program and the Shepherd Poverty Program. He will become the associate dean of the Williams School of Commerce, Economics and Politics on July 1, 2017.

Q: You recently testified before the Canadian House of Commons’ Standing Committee on Human Resources, Skills and Social Development and the Status of Persons with Disabilities. How did you end up in the Great White North, and what did the committee want to know?

Yes, I landed in Ottawa in a snowstorm. My ancestors are from Quebec, which is right over the border from Ottawa, and I grew up in Vermont, so it was a bit of a homecoming for me.

My long-time collaborator and colleague, Art Goldsmith, and I had published, along with two other co-authors, a book chapter that focused on unemployment and mental health, and I think that work caught their eye. The Canadian standing committee was exploring poverty-reduction strategies and realized another issue they needed to consider as a contributing factor to poverty was adverse psychological consequences related to unemployment.

Before I flew up, I spent some time listening to audios of previous meetings and reading prior minutes and briefs. I could tell that the committee was examining unemployment from a number of perspectives and was interested in what factors lead to poverty.

Q: Who else joined you as expert witnesses?

I was the only American. I was joined by the president of McMaster Children’s Hospital and a doctor who worked in the hospital’s Child and Youth Mental Health Program. The third person was the executive director of Pauktuutit Inuit Women of Canada. We were each allowed an opening statement, followed by 100 minutes of lively questioning by the committee members. The other experts’ testimony built upon what I said, and we ended up covering a wide range of issues contributing to poor mental health, different levels of educational attainment, employment, and general well-being including drawing on other research with Art Goldsmith that examines effects of stalking, sexual abuse and violence in the home and the community.

In my opening statement, I focused on describing recent work that examined the impact of short-term unemployment of 26 weeks or less on mental health compared to longer spells of unemployment. It appears as though shorter bouts of unemployment are not particularly harmful. It tends to become more of a problem if a person is out of a job six months or longer. I also pointed out that that the negative effects of long-term unemployment are larger for blacks and Latinos, as well as among the more highly educated.

As I discussed the findings for my research, I also reminded policy makers that my conclusions are based on U.S. data. The impact of unemployment on mental health might be different in Canada — and even among different communities in Canada — which has a more robust set of social services to cushion the impact of joblessness. I took all the lessons I tell my students about being cautious in interpreting results from papers and put it into practice before the committee.

I also gave credit to the Shepherd Poverty Program for informing some of the testimony I was about to give. The program has given me the chance to interact in an interdisciplinary environment, to think more broadly than my traditional training might have led me to think, particularly the importance of sociology, philosophy and psychology and how much those disciplines play a role in economics.

It was one of the more rewarding professional experiences of my career. Nothing beats my great interactions with my students, but outside the teaching component, it’s exciting to see the ivory-tower research potentially be used to improve the lives of citizens. As a scholar, it’s why I do what I do.

Q: You’re team-teaching a class with the W&L Teacher Education program this spring.

This is the class on Urban Education — which also satisfies requirements for the Shepherd Poverty Program minor — where students will spend time in the schools in Chesterfield County, near Richmond. It will combine both the economics of education and views from the Teacher Education program with a service-learning component. I think looking at education from these two perspectives will generate a much richer conversation about education policy.

I’m excited to be team-teaching this class with Haley Sigler, director of teacher education at W&L, which will explore childhood in Denmark. We’ll be doing a mini-practicum in the schools, where our students will teach a small lesson and visit with public and private schools in Copenhagen and also rural communities on the Jutland. They’ll also meet with a welfare board that deals with issues of school, child care and other family policies.

I want the students to be thinking about economic policy that supports childhood education. How does Denmark pay for and manage early childhood education and child care? What are the requirements for teacher licensure? How much testing should there be? These questions are very similar to what we ask ourselves in the U.S.

We may also visit an Islamic school so we can better understand the ethnic, racial, religious and cultural differences there. Denmark has excellent social services, but as a homogenous society that is dealing with an influx of immigrants, they are asking themselves if they want their taxes to be going to people who are different from them. In many ways, it’s not all that different from the questions we’re asking ourselves here in the U.S.