Thanks to Prof. Sam Calhoun for providing this update on Bill Geimer, a member of the faculty at W&L Law from 1980 until 2001. 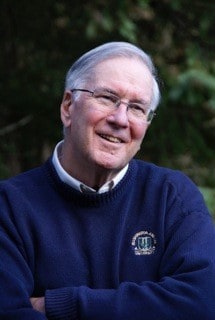 Days after Emeritus Professor Bill Geimer’s retirement celebration dinner in 2002, he found himself sitting in a Victoria, British Columbia classroom as an administrative law student.

A lawyer for whom Geimer had served as consultant in a murder case had signed him up, insisting that he qualify to practice law in the province. He did so, including taking exams and completing a 10-week Practical Legal Training Course (PLTC) required for law graduates. He referred to himself as “Canada’s oldest living articled student.” [In Canada, law graduates must “article” for a year under the supervision of a lawyer; articled students are permitted to represent clients and appear in court on lesser matters.] Geimer subsequently practiced law in BC for eight years and eventually taught the PLTC course for four years.

Earlier in his career, Geimer spent 18 months writing “15 Steps to Life,” a basic online guide for capital defense attorneys (which has been updated by our VC3 students). He returned to W&L to teach Evidence and Civil Procedure in 2007-2008, taught Ethical Problems in Criminal Law and Poverty Law at the University of Alabama four times, and taught Evidence online to international students seeking to take bar exams in the US.

Canada got out of the death penalty business in 1976, about the time the U.S. got back into it. Free of that burden, Geimer returned to activities in support of peace and nonviolent conflict resolution. He is currently traveling the country to promote his first book outside the field of law—”Canada: The Case for Staying Out of Other People’s Wars.” The book is a fascinating read. Not only does it offer much interesting history, but it provides fair, thoughtful guidance on any nation’s responsibility to determine whether a war’s objectives are worth its many costs (presented in sobering detail). Geimer will use the book as the text in teaching a course at the University of Victoria. He also now serves as advisor on military matters to Elizabeth May, Member of Parliament and leader of the Green Party of Canada. At present, Geimer is not considering retirement.

Professor Geimer and his wife Elizabeth Bennett (W&L ’90L) have been Canadian citizens for more than 10 years. Over the 17 years they have lived in Canada, they have particularly enjoyed visits from former colleagues and former W&L and Alabama students. They hope that readers of this update will plan now to come to Beautiful British Columbia in the near future.