Racing Through Summer Ben Peeples '21 is enjoying a chemistry internship at Brown University while training for the World Canoeing Championships in Bosnia and Herzegovina.

“I would say to a prospective student that W&L is a place where you can have amazing conversations with peers and professors alike, and that it is somewhere that provides the necessary tools to excel in whatever your interests are.” 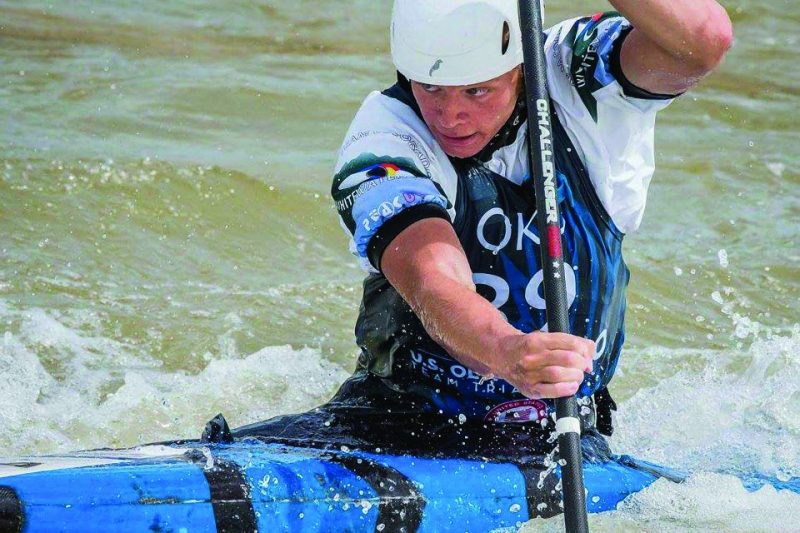 Ben Peeples ’21 races a kayak in the Slalom Age Group Nationals Race at Riverside Rapids in Oklahoma City, where he won second place in his age class. This summer, he will compete in canoeing.

Ben Peeples ’21, a biochemistry and philosophy major from Brighton, Colorado, is spending the summer at Brown University, where he is conducting research in a synthetic inorganic chemistry lab. When he hasn’t been at work this summer, he has been training and preparing for the 2019 ICF Junior and U23 Wildwater Canoeing World Championship in Banja Luka, Bosnia and Herzegovinia, which takes place in late July. Ben checked in to explain how he got involved in competitive canoeing and what he has enjoyed so far about his experience at Brown.

It’s not every year that W&L can say it has a student competing in the World Canoeing Championships. How long have you been canoeing and how did you get to be so good at it?

I have been canoeing for more than six years now, and I think that I have had some amazing coaches over the years who have helped me get to where I am today. I first started with a local high school that had a kayaking team called the Dawson School. From there, I raced in small local races and eventually moved up to statewide races and began competing with Team Colorado Whitewater Racing. At that point, I was part of both teams and I began to travel to various national level races with Team Colorado. With Team Colorado, I was able to compete at national team selection races that then allowed me to join Team USA, and I began to compete in various international races.

How many times have you raced and how did you do?

I have been in far too many different races to count, but the international races are: 2015 Junior and U23 Canoe Slalom World Championship in Brazil, the 2017 Junior and U23 Wildwater Canoe World Championships in Austria, the Junior and U23 ECA (European Canoe Association) World Cup Races in Slovenia, Poland, and the Czech Republic; and some of the larger national races are: Canoe Slalom Age Group Nationals, Wildwater and Open Canoe Downriver Age Group Nationals, and National Team Trial races. 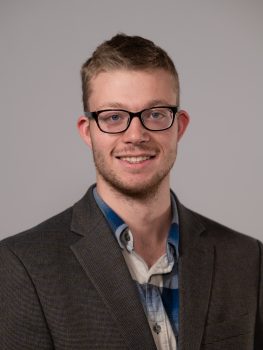 How did you make the team this year?

This year, I made it in a little bit of an unorthodox way. In previous years, I went to the Team Trials race and competed for a spot on the team. This year, I was unable to make the trials race, so I requested a bye. There is a fairly long process for this; however, because of my previous successes at World Championships and dedication to the team I was given a spot on the team.

The event takes place in Bosnia and Herzegovina July 23-28. What will your participation entail for you?

I will be training and getting used to the Vrbas River there for about a week before competing in the race. I will be racing C1 (single canoe) in the Sprint and Classic races. There is a chance that I will also race in the C2 (double canoe) races; however, I will not know until I get there.

What have you been doing to prepare for the championships?

I have been training in the boat as well as working out and I have also been studying videos of the river I will be racing on so that I can have a good idea of what to expect there.

Why do you love this sport?

My favorite part of this sport is how dynamic it is. There is no way to control what the water is going to do at any given second of the race so you have to prepare for all possible options beforehand and then adapt to the flow of the water when you are actually racing. 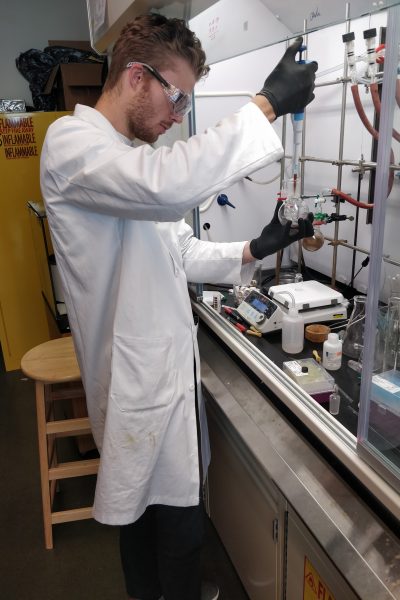 Peeples optimizes an isolation procedure in order to determine the best way to purify a compound that he made in the lab at Brown University and will later use for other experiments.

Aside from canoeing, what else have you been up to this summer?

I am doing research in a Synthetic Inorganic Chemistry Lab at Brown University. To spare you from the technical details, I am working on developing a molecule system that allows you to quickly add targeting regions as well as a radioactive metal so that it can be used simultaneously as both a multi-functional targeted cancer therapeutic and MRI imaging agent.

Did any special funding allow you to participate in this experience?

I am being funded by the Allen Grant through the Chemistry/Biochemistry Department.

What’s been your favorite part of that work so far?

I enjoy the challenge of trying to work in a subject that I have no previous knowledge in, as well as the multitude of resources available for me to use in the research. It is like a changing puzzle that I  constantly need to adapt to and figure out.

What made you decide to study at W&L and what would you say to a prospective student who is thinking about applying or attending?

What made me decide to study at W&L was definitely the accessibility of the professors. When I came and visited the school, there were multiple professors that took the time to talk to me after classes and tell me about what it was they were teaching. I would say to a prospective student that W&L is a place where you can have amazing conversations with peers and professors alike, and that it is somewhere that provides the necessary tools to excel in whatever your interests are.

What is your personal motto?

“It is the mark of an educated mind to be able to entertain a thought without accepting it.”
–Aristotle

What’s the best place to eat in Lexington? What do you order?

If you could recommend one film or book to everyone, what would it be?

The novel “Dune” by Frank Herbert

Going to Panther Falls with some friends and hanging out there for a few hours.

What are your post-grad plans?

I currently hope to get into an MD-PhD program to study and research medicine.