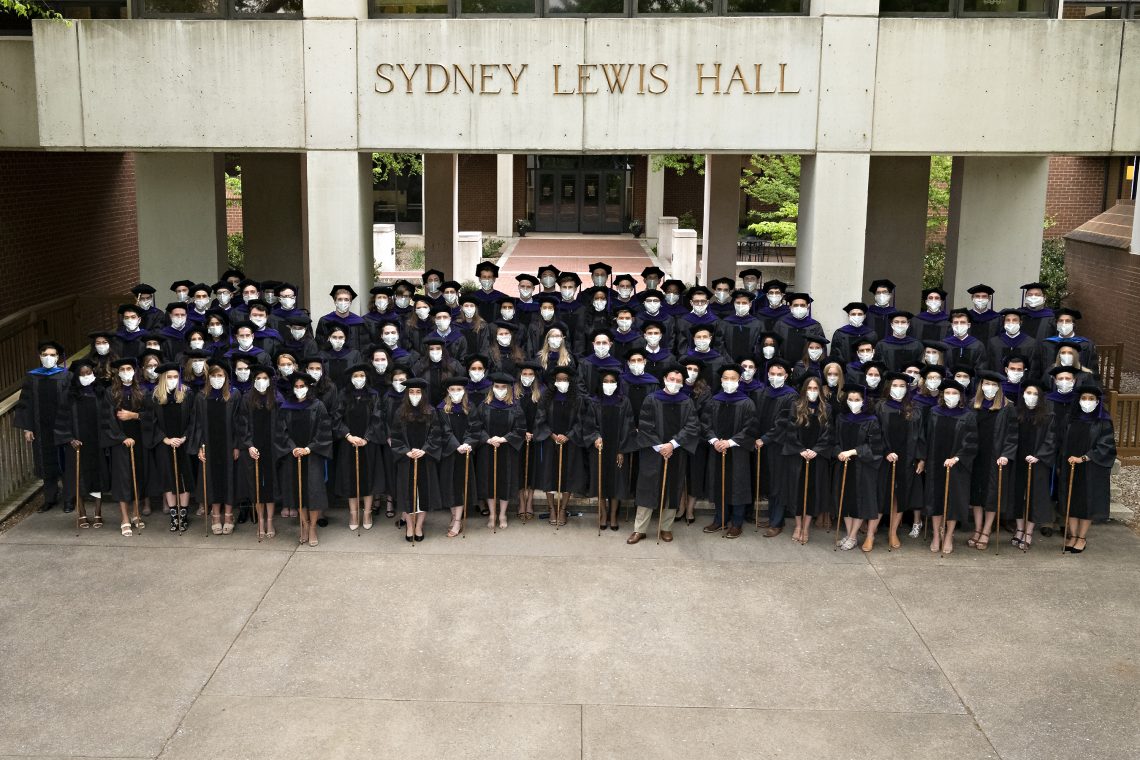 The Washington and Lee University School of Law celebrated its 166th commencement on Friday, May 7, awarding 119 juris doctor degrees.

The event, held on a cool day and marked by a few rain showers, was the first time since the onset of the COVID-19 pandemic that the Law School community was able to gather in person, although masks and social distancing were still in place for the ticketed event. In order to provide the graduates and guests with adequate space, the graduation ceremony was held on Wilson Field, a first for the University as noted by President Will Dudley.

“The experience of the class of ‘21 has been historic,” said Dudley.  “Your 3L year has been like none before it.  Yet, at the same time, you share much with the law graduates who have preceded you.  Your time at W&L has shaped you, as individuals and as a class.  Together you have studied, argued, and developed the habits of mind that characterize good lawyers.  You have made lasting friendships that will give you pleasure and support wherever you may go.”

Brant Hellwig, Dean of the Law School, followed President Dudley to the podium. He congratulated the students on their achievement and also thanked them for their many contributions to the life of the school, both inside and outside the classroom.

After the graduates were awarded their degrees, President Dudley introduced Dean Hellwig as this year’s commencement speaker. Hellwig has served as Dean of the Law School since 2015 and will conclude his tenure in office this summer.

Hellwig took the reins during a turbulent time for legal education and led the school as it achieved record highs in employment outcomes for our graduates, beat annual fundraising targets, and improved its competitive position in the national market. He was also instrumental to recruiting a distinguished and diverse group of faculty members, and in creating a dedicated legal writing program.

Hellwig organized his address around a song playlist, drawing out the themes of the songs and interweaving them with inspiring stories of some of the School’s alumni and with advice for students. For example, the Bill Withers classic “Lean on Me” served as an opportunity to highlight the role of a lawyer in society.

“When you examine the role of a counselor and advocate with an eye toward the humanity of the position, a law license offers the potential to bring to others a sense of calm, comfort, and even hope. To be the person your clients lean on.  The ability to serve that role is an incredible privilege and a tremendous responsibility.”

During his talk, Hellwig also shared the inspirational story of alumnus Edmund D. Campbell, who graduated from the College in 1918 and the Law School in 2022. In 1958, Campbell successfully represented plaintiffs before a Federal panel of three judges in the Eastern District of Virginia in James v. Almond, a decision which overthrew Virginia’s program of “Massive Resistance” and resulted in the racial integration of Virginia’s public schools.

Campbell took the case even though he knew it was politically unpopular in his home state and might negatively impact his law practice. Combined with the lyrics of Curtis Mayfield’s “Keep On Keeping On,” Campbell’s story served as an opportunity for Hellwig to urge students to fight for justice.

“Both now and in the years ahead, you undoubtedly will have an opportunity to stand up for what you believe is right, and you will have the benefit of a law degree to enhance your ability to obtain those results for your clients and for society more broadly,” said Hellwig. “I hope you claim those opportunities and, that when you do so, that you just keep on keeping on.”

Following Hellwig’s remarks, third-year class officers Will Mallery and Aaron Hardy presented Hellwig with his very own walking stick, traditionally given to students at the awards ceremony preceding graduation. The walking stick, or cane, originated in the 1920’s as a way to distinguish third-year law students on campus. At that time, only two years of law school were required, and the walking stick served as a way to reward and honor those students who stayed for a third year. 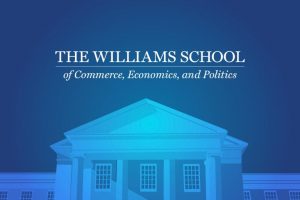 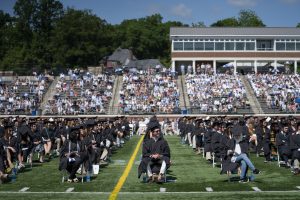