Serving Veterans As an executive at the Department of Veterans Affairs and the United Services Organization, Navy veteran Ned Powell ’70 impacted the lives of many service members before retiring. 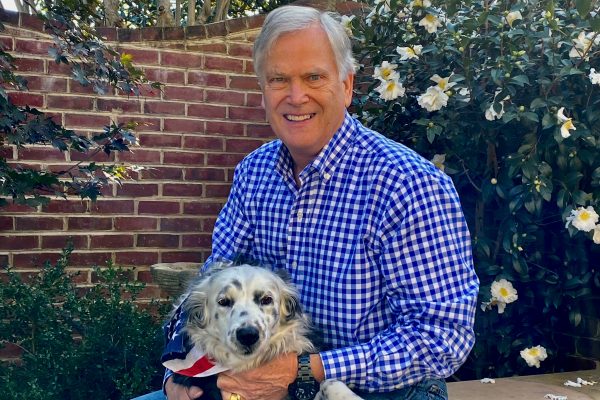 “A history course or a literature course, economics, I could explain it to you,” he said, “but then come to the test, you’d get a B+ or an A, and I’d get a C because my answers were so gobbledygooky.”

In the Navy, he began to feel the deeper benefits of his education. Drafted in December 1969 and ineligible for officer candidate school because of poor vision, Powell enlisted and worked in administrative positions at the Defense Intelligence Agency.

While spending hours a day at a desk, guarding the entrance to a secure area, he got permission from his chief to read on duty. He began working his way through “all the reading assignments I hadn’t finished,” he said. “And reading the good books, good authors, teaches you how to write. Because you learn what a good paragraph is, a good sentence.” Powell served four years in the Naval Reserves after finishing his active duty and used the G.I. Bill to get an MBA from the University of North Carolina, which opened the door to executive positions.

After a decades-long career in real estate and business which brought him into contact with many notable people, Powell was preparing to retire in 1996 when President Bill Clinton, over a golf match, told him the government could use his help. A Republican at the time, Powell balked initially, but he found Clinton’s argument persuasive.

“Government desperately needs management,” Powell explained as Clinton’s general theme. “And management’s not political. You’re either good at it or you’re not. But you’ve got to be committed to doing it,” President Clinton said, playfully accusing Powell of not being as committed to service as he thought.

Raised in a family with a deep reverence for public service (his father, E. Angus Powell ’36, served on the Federal Reserve Board of Richmond, and his uncle Lewis F. Powell Jr. ’29, ’31L served on the U.S. Supreme Court), Powell found the conversation motivating. He joined the Department of Veterans Affairs as assistant secretary for financial management and was eventually promoted to acting deputy secretary. Once there, he realized government agencies are run fundamentally differently than private companies — for good reason.

“The career people are there to make sure government doesn’t go off the rails. Your Social Security check arrives every two weeks, the roads are built. The private sector has failure as an option. Failure is not an option when it comes to government.” He realized it was up to him, as a political appointee, to lead changes, because he had the mandate and legal authority to take risks the careerists did not.

As the equivalent of the VA’s chief financial officer, Powell guided it to its first clean audit opinion. He received the VA’s Exceptional Service Award and a host of other recognitions for his work.

Powell was preparing to retire again in 2001 when, shortly after the Sept. 11 terror attacks, his wife pointed out a quarter-page ad in The Washington Post. The USO, famous for entertaining troops during World War II, needed a new CEO. Intrigued, Powell sent in his resume and reached out to a few people he knew on its board. With his experience at the VA, he got the job.

He considers turning the USO around his greatest achievement.

“The organization I walked into was virtually bankrupt. I was able to leave it with $100 million in the bank. When I got there, we had just over 200,000 active donors. When I left, we had over 2 million. We were top rated by Charity Navigator. We had a 90 to 10 program-to-overhead ratio, and I’m very proud of that.” Soldiers, he said, sometimes thank him when they find out his role with the USO. “And you go, ‘No, no, no — our job was to thank you.’ But you know you’ve impacted people’s lives.”

W&L helped shape his career, Powell said, by anchoring him to an integrity not always shared by those around him. “The one word you will never hear in Washington is no. You ask a politician anything, it’s always ‘Well, sure. Let me introduce you to my assistant over here.’ I have found that ‘no’ is a perfectly good answer. I can’t tell you the number of people I’ve had come back to me and say, ‘You actually did what you said you were going to do.’

“Well, that’s W&L. It’s a sense of personal integrity, a commitment to foundational principles. And these are the essential lessons of character you get at W&L.”