Set in Stone Debris from the aftermath of the Hiroshima bombing found its way to W&L’s Special Collections, where it heightened one class’s understanding of a powerful Japanese novel.

“It is no longer just a story in a book — there was something about seeing something physical and knowing what they came from that was very powerful.”

Near the end of 2020, Janet Ikeda, associate professor of Japanese, and students in her Japanese literature class at Washington and Lee University visited Special Collections and Archives to view what would seem, in the absence of context, to be merely a box of rocks.

But as Tom Camden ’76, head of Special Collections, unwrapped the stones to show the class, he also unraveled the tale of their origin, which struck some students as one of the most impactful lessons they’ve learned thus far at W&L.

These “Hiroshima stones,” as Ikeda and Camden call them, are not exactly stones but rather pieces of debris collected from the Motoyasu River in Hiroshima, the target of the United States’ deadly atomic bombing on Aug. 6, 1945. They were shared with Ikeda’s class to complement a reading of Japanese author Masuji Ibuse’s 1965 novel “Black Rain,” which tells the story of one family’s experience in the aftermath of the horrific event. 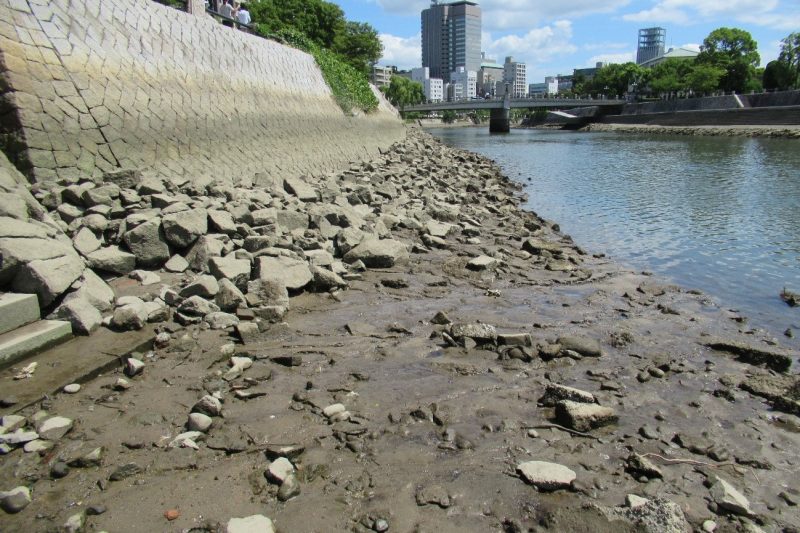 Cassandra Sobieski ’22 said that seeing the stones up close sharpened the lesson for her considerably.

“I think perhaps it made it more tangible to see an actual relic from that time,” she said. “It is no longer just a story in a book — there was something about seeing something physical and knowing what they came from that was very powerful.”

The story of how W&L acquired the debris dates back to 1951, when Tatsuo Morito, then-president of Hiroshima University, sent a letter to James G. Leyburn, W&L’s acting president at the time, regarding the establishment of a Center for Peace at Hiroshima University. Morito was asking universities around the world to donate books or periodicals about peace problems, as well as trees to help them ‘verdurize,’ as he put it, the Hiroshima University campus, which had been left a “burnt, red-rusty hue” by the bombing.

“Not red, symbolizing struggle and blood-shed, but green which is the color of growth and hope, I believe, should be the color of our university,” Morito wrote.

In response, Leyburn asked a W&L librarian to send books to Hiroshima University and donated funds that the Japanese school could use to purchase a tree that would thrive on its soil.

Many years later, in 2011, a Hiroshima University researcher named Reibun Kayo sent W&L a thank you gift of seven “stones” wrapped in green silk and accompanied by a letter from a physician declaring that the objects were safe to handle, not radioactive. The stones have since resided in Special Collections, but they have only recently been used for educational purposes. Ikeda credited Emily Cook, research and outreach librarian, with mentioning the stones to her and giving her the idea to incorporate them into the class. 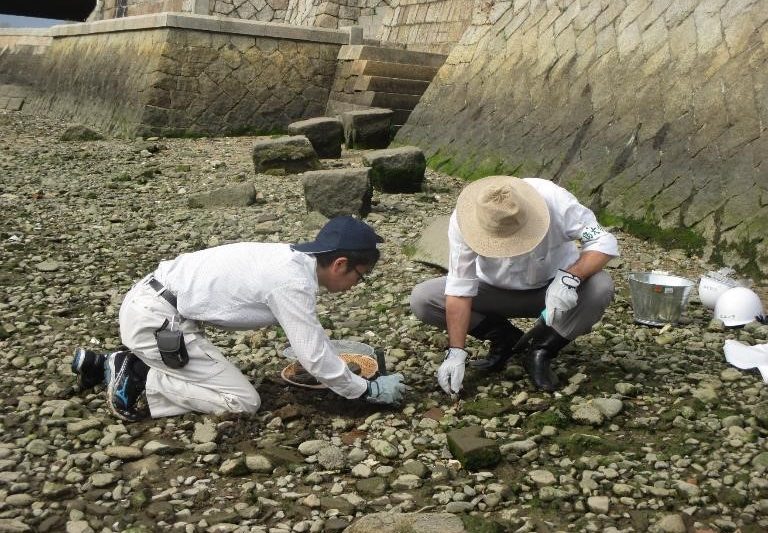 Hiroshima University researcher Reibun Kayo (left) and a colleague at the Motoyasu River in Hiroshima. Photo courtesy of Reibun Kayo.

As she planned the syllabus for her survey course, “Great Books of Japan,” Ikeda knew she wanted to include a selection of atomic bomb literature, an important genre in Japan. In her experience, she said, American schools spend either no time or very little time teaching students about the atomic bombings of Hiroshima and Nagasaki. What they do teach, she said, usually is not from the Japanese perspective.

“I often feel, and I think it is common, that when the atomic bombing is brought up in the American education system, the perspective is that we are in the plane with the pilot,” Ikeda said. “We know the name of the plane, the Enola Gay, and we are up there with the pilot about to drop a bomb on a city. The question we start with [in class] is ‘What was it like beneath the mushroom cloud?’ The Enola Gay just flew away after dropping the bomb, and that’s what I think Americans do, sort of fly away with the pilot.”

Sobieski and another student in Ikeda’s class, Sho Gibbs, agreed that they didn’t hear much about the atomic bombings in secondary school. Gibbs, who grew up on the West Coast, said the only reason he is familiar with the history is because his mother is from Nagasaki. His mother tells the story of her father seeing the mushroom cloud from the countryside outside Nagasaki, and he has heard a little about what it was like living there before the economy recovered from the devastating bombing.

“Black Rain” uses straightforward, unflinching descriptions to tell the story of three family members in Hiroshima who survive the bombing but watch as their loved ones develop symptoms of radiation poisoning.  “In my mind, it happened in an instant or over a day,” Sobieski said, “but for the people who lived there, it was years of suffering and consequences, so I think that’s what stood out to me the most.”

This “stone” from the atomic bombing of Hiroshima includes pieces of debris such as glass and tile.

The Hiroshima “stones” may not be stones, but rather debris such as pieces of roofing tiles.

One of seven Hiroshima stones donated to W&L

When Kayo shipped the seven stones to Lexington, he enclosed a letter that included a statement about the horror of the bombing, noting that there were so many bodies in the seven rivers that converge in Hiroshima that many of them sank to the bottom. The stones are believed to have absorbed their souls.

“Even the most jaded person is going to be affected by that story in some fashion,” Camden said.

Kayo’s letter included a message of peace, a response that Gibbs believes is representative of Japanese culture and its attitude toward its difficult history. “Remembering the bombing is important not just because we are opposed to atomic weapons, but because peace is the ultimate goal,” Gibbs said.

After the class visit to Special Collections, Ikeda decided to reach out to Kayo. She gave the students an assignment, asking them to write a letter telling him what seeing the stones meant to them. When she read their letters, Ikeda said, “I was so moved. Maybe it was the stress of the term, but I felt myself crying when reading the letters.”

The following is an excerpt from Sobieski’s letter to Kayo:

“’Black Rain’ was one of the most emotionally difficult novels I’ve ever had to read, but because of that I think it is one of the — if not the — most important works I’ve read. … In reading ‘Black Rain’ and the letter you sent to Washington and Lee to accompany the stones, I felt such anger, sadness and shame as I had never felt before. The description of countless bodies burned and radiated beyond recognition and those who suffered the aftereffects of the bombs was such a jarring awakening from the silence that I had thus far been surrounded by concerning these innocent victims of the war. … Upon seeing the stones you sent, that anger was replaced by a deep sadness. I felt the weight of the countless innocent souls killed by the A-bomb rest on mine, and I cried for them. I pictured my loved ones, trying to imagine the pain of losing them in an instant or watching them deteriorate over time, and found it overwhelmingly difficult. As much as it hurt, however, I continued to read and I continued to think of the event, as I feel every American should. When we are not exposed to the real horrors of these events, it can be easy to avoid facing the consequences of them. I believe ‘Black Rain’ and your accompanying letter should be mandatory [reading] for every American student. … Thank you for telling the stories of those impacted by this tragedy, thank you for not letting their voices stay silent, and thank you for sending a message of peace. As much as I want to jump up in arms and ‘punish’ those responsible for these lives lost so unnecessarily, I know it will only bring more pain if the cycle continues. So instead, I will take a lesson from you, and encourage peace and education on these matters, and pray for the souls of those lost.” 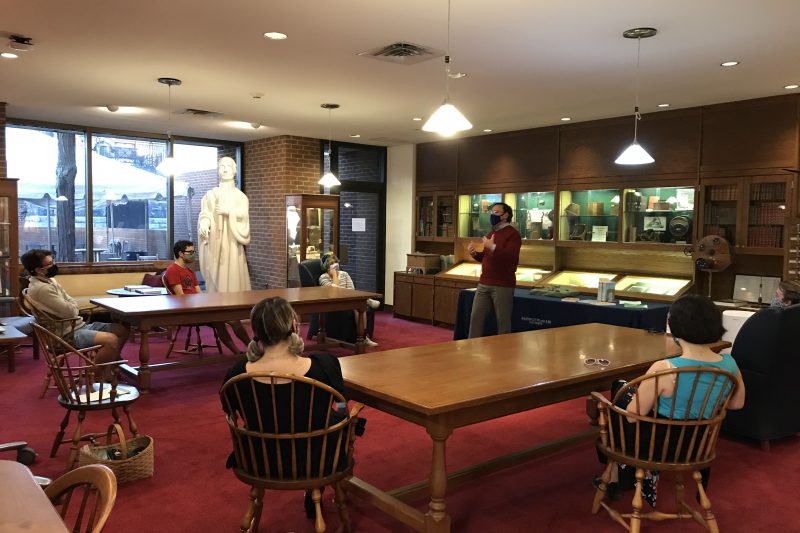 Ikeda said she was thrilled to be able to teach a lesson that was connected to objects in Special Collections in such a meaningful way. At a time when many courses must be held in a virtual format because of COVID-19, it was a treat for her small class to be able to visit the library in person, while practicing physical distancing, and hear from Camden, who is a “great storyteller,” she said.

“If I see a student 10 years from now, what are they going to remember from the class?” Ikeda said. “It isn’t going to be the grade and the quiz. I hope it’s going to be something like folding a crane or seeing those stones in Special Collections.” 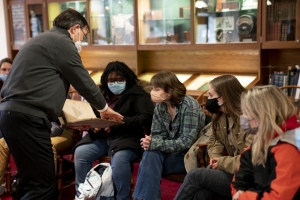 Historians for a Day 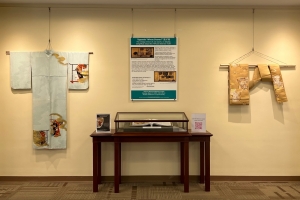