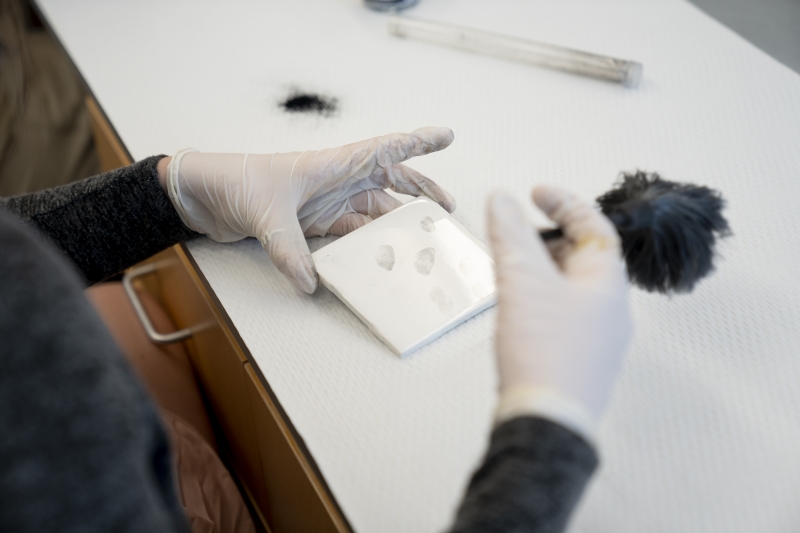 “You don’t expect the hands-on learning during Spring Term to be that much different from your high school experiences, but the amount of effort that has been put into everything we’ve done so far is so exciting.”

Washington and Lee community members were abuzz with curiosity on a recent spring afternoon as they opened emails with the subject line: “FBI on campus April 28th.”

Curiosity gave way to excitement as word spread around campus that the reason for the visit was CSI: W&L, a popular Spring Term course co-instructed by Fiona Watson, associate professor of biology, and Fred LaRiviere, associate dean of the college and associate professor of chemistry. The course is an introduction to the field of forensic science with a focus on crime scene evidence, particularly the analysis of trace biological evidence and forensic toxicology.

Students’ enthusiasm was palpable as the class gathered outside Howe Hall to tour a crime scene vehicle used by the evidence response team from the Richmond office of the FBI. Leslie McClane, FBI community outreach specialist, and a team of special agents offered the class a hands-on tour of their crime scene truck, a modified Ford F-550. The truck contains evidence packaging equipment, excavation tools and a lighting rig for working at night. Washington and Lee is one of the first colleges to experience a site visit from the truck.

When Watson called the Richmond office to inquire about a class visit, McClane, a Lexington native, saw a great fit for her evidence response team. The laboratory portion of the course provided McClane and her team the opportunity to show students best practices in analyzing collected crime scene samples while using some of their most common forensic laboratory techniques. 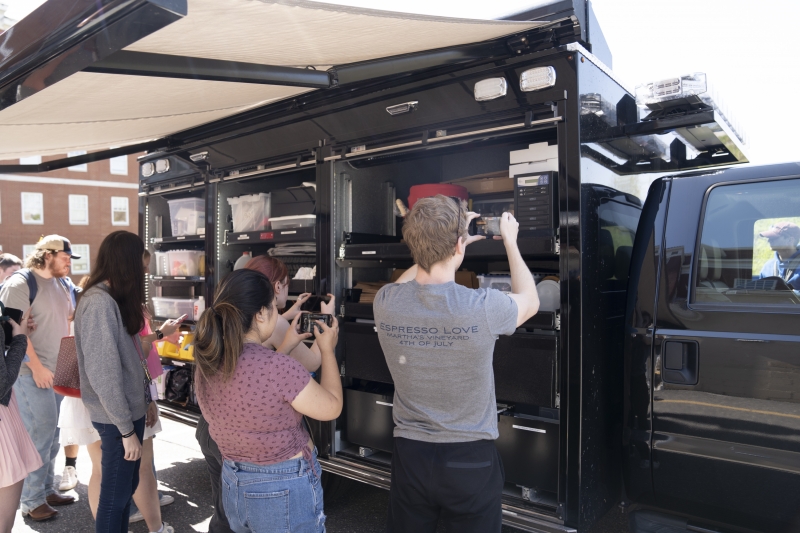 McClane, who is responsible for coordinating outreach and education, said that educating the community about crime prevention and the FBI is a service they offer to the public. She and her colleagues have offered community programs on human trafficking and talked to retirement communities about elder fraud in addition to their work in college classrooms.

“We have an old adage in the FBI that you never want to make friends in the middle of a crisis,” McClane said, “so a lot of my job is just forging relationships with the community and trying to strengthen the trust that we have.”

Special Agent Cameron Fricks, who has been with the bureau for 15 years, said programs like this are why he wanted to be a part of the bureau in the first place.

“The reason I joined the FBI was to serve the community,” said Fricks, “so the best part of the job is that service aspect, whether it’s responding to crime, providing professional searches during a time of need or, in this case, working with college students in a training environment. This is why I signed up.” 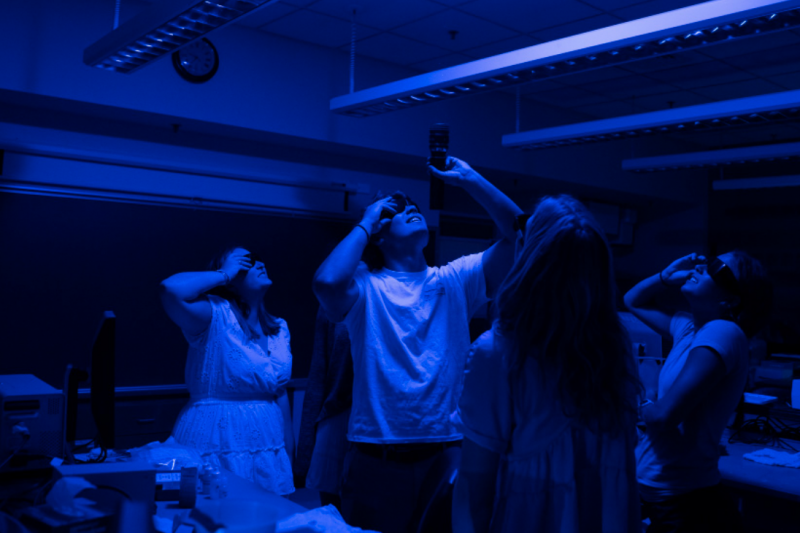 CSI students look for evidence under an ultralight.

Prior to their time with the crime scene truck, students spent the afternoon with the evidence response team learning about evidence collection techniques in the lab. While one group of students learned techniques for collecting fingerprints from McClane and her partner, another group conducted presumptive blood tests and used an ultralight to detect evidence of fluid around the lab as if the space were an actual crime scene.

Madison Kwasnik ’25 said that the experiential aspects of the course have allowed her to learn in new ways.

“You don’t expect the hands-on learning during Spring Term to be that much different from your high school experiences, but the amount of effort that has been put into everything we’ve done so far is so exciting,” said Madison Kwasnik ’25. “I feel like I’m learning so much.”

The class visit was timed to provide an overview that would inform students’ investigation of a mock crime scene the following week. The mock crime scene exercise has been an integral part of the class for many years. Students are told shortly after they have arrived in class that there has been a crime on campus; they’re then divided into teams to gather and analyze evidence collected at the crime scene. Kelly Bezold, research associate for the Biology Department, delivered fresh cow’s blood supplied by a local meat processing facility the morning of the exercise. Watson and LaRiviere sprinkled traces of blood at each crime scene location where a robbery had been staged and in the staircases between floors of Howe Hall.

“I was shocked to learn how much you can’t see with the naked eye,” said Jud Cummings ’25, whose team was assigned to secure a crime scene staged in Howe Hall. “There’s so much more to see with the right tools.”

Watson said that the timing of the FBI visit, in addition to a class visit from a local defense attorney, prepared students well for their crime scene assignment.

“I think this also helps students connect this work to individual lives affected by crime,” Watson said, “and why sound science in evidence collection is so important.” 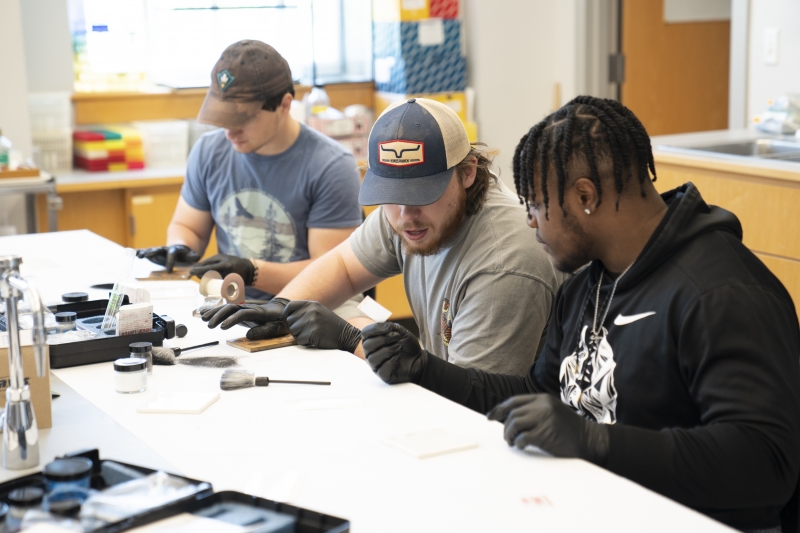 Lab teams practice dusting for fingerprints in the lab.

Lucy Dixon ’25 said that she was inspired to enroll in the class in order to explore whether she could see herself pursuing a career with the FBI. She’s now interested in applying to the bureau’s internship program. She and other students cited the FBI visit and mock crime scene investigation as opportunities to experience what working in the field is really like, including the unexpected challenges and discoveries of evidence collection.

“I did not expect to have this much fun during Spring Term,” said Hailey Neaman ’25. “They keep throwing curveballs at us, and I’m excited to see what’s next.” 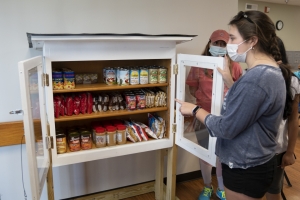