Struggle and Triumph As the new General Counsel for the Carolina Hurricanes, Nigel Wheeler '15L has fulfilled his dream of a legal career in professional sports. 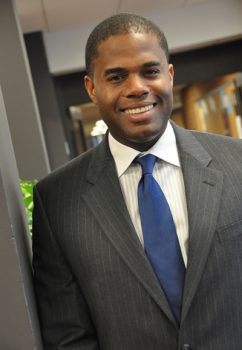 W&L Law alumnus Nigel Wheeler ’15L started working as general counsel for the Carolina Hurricanes at the beginning of the pandemic.

That means that in addition to dealing with normal legal issues like property law and contracts, he writes COVID-19 disclaimers and also serves as the team contact tracer.

Wheeler got the job offer in North Carolina only after investing in a new house in Dallas, where he was working as an associate at Bracewell LLP. He had an infant and four-year old child at home, so his family wasn’t poised for a transition. Add those facts to the impending pandemic, and the timing couldn’t have been worse.

But in many ways, Wheeler expected that.

“I’ve always been a big meditation guy,” Wheeler explained.  “And I’ve studied the careers of a lot of different people in the sports world. I’ve learned that, if you have an opportunity, it’s going to be terrible timing.”

His wife was supportive, so they moved.

Working in sports was quite literally a dream of Wheeler’s ever since he entered law school. But getting such a job was not as easy as he expected.

“I had tons of rejections,” Wheeler said.

After law school, he took a job in mergers and acquisitions before shifting to public finance. But he was still determined. He used visualization, and imagined himself walking into the office he wanted—another skill he learned from studying athletes.

“A lot of [athletes] talk about visualizing what they’re going to do before they are going to do it, he said. “And it seems that the mind can’t separate fantasy from reality.”

Of course, Wheeler’s visualization was accompanied by action. He worked through setbacks and made dozens of connections with people who could help him. He learned how to network at W&L Law and claimed that, for him at least, this was the school’s biggest value. Because of its size, students are practically forced to develop “people skills.”

“Every interaction you have at school—with faculty, folks in the Brief Stop, and other students—will easily translate into every other professional networking experience,” he explained. “When I meet people, I really try to get to know them. You can learn so much from how someone describes the things that they love.”

Wheeler was recently a guest on the official podcast for the Carolina Hurricanes, called “Canes Cast,” which has a series that seeks to “amplify Black voices” within the hockey league. In the podcast, Wheeler claimed that hockey needs to become accessible at a pre-professional level if it wants to diversify on the ice and in the front office. Fees for “ice time,” and hockey gear can be prohibitive. 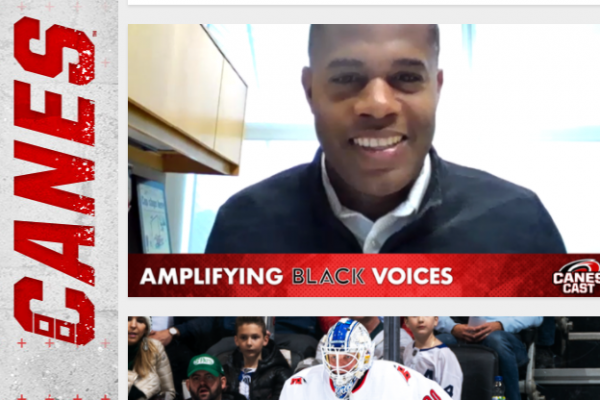 But if more and more adults and children are invited to play or enjoy the sport, Wheeler imagines that it will take off with all kinds people; to him, the dynamics of the game are fascinating.

Meanwhile, Wheeler has also launched his own podcast, called “Struggle and Triumph.”

“It’s stories from people who have had to work hard to get there where they are,” Wheeler said. “And in other cases, it’s about people [who have] crashed and burned.”

It’s obvious why this investigation would be attractive to Wheeler. After college, he barreled his way into broadcast journalism, taking jobs all over the U.S. Then he toured the world with his reggae rock band–in which he sang and played guitar–for five years.

Both experiences taught him different kinds resilience: mistakes are inevitable when you are reporting live, and money is precarious when you are in a fledgling band. He once busked on the street in the hopes that he and his bandmates could each get a drink on $1 beer night at a local pub. (They ended up making $150).

Now, after years of working and dreaming, he’s become the general counsel for a national sports team. Struggle and triumph, indeed.