“Meeting this guy who has this horribly sad story, who I share so much in common with ideologically — all that challenged every image I previously had.” 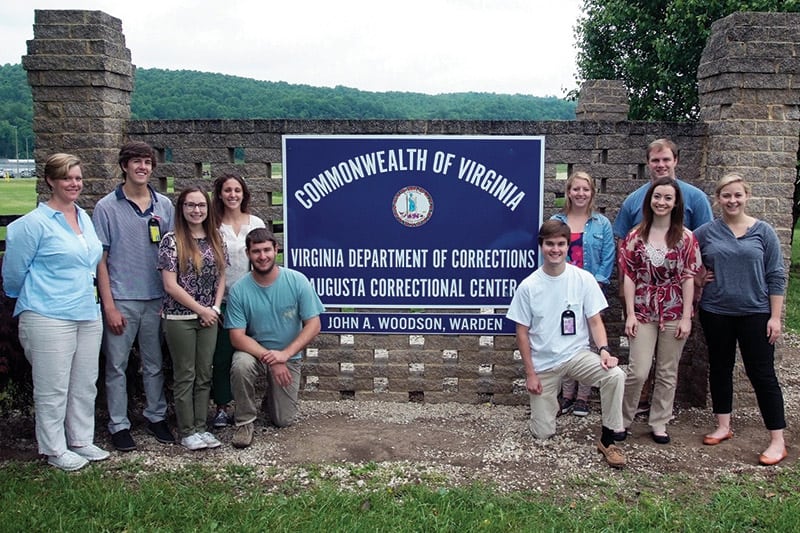 MarQui Clardy was a father of four, a Navy veteran and a college student when he committed a series of armed robberies that resulted in a prison sentence of five life terms. That was 2009, and he was only 25 years old.

Clardy, a Portsmouth, Virginia, native who has endeavored to better himself while incarcerated, figured he’d never see the inside of a college classroom again. But that didn’t prevent him — along with 10 fellow inmates at Augusta Correctional Center — from recently earning college credits from Washington and Lee University.

The unusual opportunity came about through Professor Kelly Brotzman’s spring 2015 class, “Incarceration and Inequality,” which allowed nine W&L students to team with prisoners at Augusta and study issues such as juvenile justice, sentencing and quality of life in prison. Brotzman, a 1995 graduate of W&L, is a visiting assistant professor in the university’s Shepherd Program for the Interdisciplinary Study of Poverty and Human Capability.

“There is essentially nothing in terms of college education in prison now unless a college has a special outreach, and that is not very common,” Brotzman said.

It seemed even less likely that the inmates would be able to earn W&L credits for the class. They received certificates at a small prison ceremony in June 2015, but in terms of actual credits, Brotzman said, “I thought there was about a 50/50 chance … I also worried that some faculty would feel like it was watering down the brand.”

Instead, University Registrar Scott Dittman strongly supported the idea, and faculty members agreed. Now, each inmate has a transcript with four credits. Six are signed up for this spring’s incarnation of the course, “Freedom and Unfreedom.”

Some of the students and inmates admit they headed into “Incarceration and Inequality” with preconceived ideas about the other group.

“I automatically (incorrectly) assumed the students were going to be a bunch of snobbish, entitled, rich kids with their noses turned up at the inmates. I was definitely concerned about there being too much of a cultural gap between them and us,” Clardy wrote in an email from Augusta. “I’m aware of the public’s perception of inmates, so just as I had my preconceptions, I expected the W&L students to be coming in with their own assumptions of us being knavish, violent, conniving and all-around criminally inclined. However, after meeting them I almost instantly realized how wrong my assumptions were.”

The students, including Clardy’s study partner, Thomas Joyner ’18, were just as honest about their concerns. They wondered if the prisoners were going to be able to keep up with the class.

“Now that seems so stupid to me,” Joyner said. “I just didn’t give them the credit that they’d be able to maintain the pace that we have in the classroom here. He is just so smart and makes the best points, and he really pushed me to think critically about the issues we were discussing.”

Brotzman said the inmate students were chosen through a process created by Augusta’s then principal, Teresa Bryant. They had to have a GED or high school diploma and 12 straight months of good behavior. They also had to pass a timed writing exercise.

Two of the Augusta students who took the class last year are in for drug crimes, five are serving time for murder, and the rest are in for armed robbery. Four are serving life terms (Clardy’s original sentence was reduced to 33 years). Only three are eligible for parole, and one has been up for parole 28 times.

The class met three days per week from 2 to 5 p.m., a time period between prison counts when inmates had to stay in the same location. A correctional officer was stationed in the hallway outside the classroom, but there was no officer in the classroom.

After signing up for the course, the W&L students went through an orientation at the prison. It included a background check and a day of training that covered topics like the Prison Rape Elimination Act and gang behavior. They also got a full tour of the facility. “It was a level of access that I didn’t expect,” said Emma Swabb ‘18.

Well before the class started, Brotzman prepared some 800 pages of required reading for students, consisting of articles, studies and reports, and delivered them to the correctional center. Like the traditional students, the inmates had to read the materials assigned for each day’s class so they could take part in the discussion. But most had read all of the materials even before the first class — and some had read it all twice.

“There’s not much to do in the housing unit, so being able to gain new knowledge and do actual school work gave me the feeling that I was doing something important and constructive with my time,” Clardy wrote.

Joyner remembers vividly the first day of class, including the moment he met his study partner.

“He walks in and he is this tall, really dark-skinned, huge guy. We are total opposites in every way. I’m this little shrimpy white kid. But he was so lighthearted and kind, he immediately put all my nerves at ease.”

Each study team had a journal that the student and inmate traded back and forth. When it was their turn to write in the journal, each student wrote an entry responding to the readings and what their partner had written.

Clardy and Joyner said they got to know each other so well that as they wrote their journal entries, they could anticipate how the other person was going to react to that particular lesson. They also learned that they didn’t have to hold back with each other when expressing opinions.

Swabb had two in-class study partners because one W&L student had to drop the class. Both men are serving time on drug charges. Swabb said her brother has had drug problems, and although he has never served significant time, his struggles caused her to view her study partners a bit differently.

“I was able to connect with Zach and Jon because my older brother is an opioid abuser,” she said. “I was able to put that in perspective with my brother’s experience versus these guys’, just to see how different it could have gone.”

Learning about topics like justice reinvestment through the eyes of someone living in prison was enlightening for the students, just as discussing and debating the topics with young people on the outside was transformative for the inmates, Brotzman said.

Joyner found all of his stereotypes, which had been perpetuated by TV shows and movies that portray prisoners as violent and mean, were turned on end. Some would deem Clardy’s original sentence of five life terms to be unusually harsh for a crime in which nobody was physically injured. Severe financial problems and a fear that he would not be able to afford to finish college were factors in his criminal behavior. That part of Clardy’s personal story affected Joyner.

“Meeting this guy who has this horribly sad story, who I share so much in common with ideologically — all that challenged every image I previously had. I did wonder, what is the ratio? Who does fit that stereotype, and who just made a mistake and just wants desperately to get on with his life?”

Going into the course, Swabb said, the W&L students knew that inmates weren’t getting any credit, “which we all thought was unfair, but we had a lot of faith in Dr. Brotzman.”

An inmate who is scheduled for release in 2019 told Brotzman that he wants to enroll in community college when he gets out, so four credits will save him both time and money. For other inmates, taking the class was rewarding enough.

“I was elated when I learned that Washington and Lee had decided to issue college credits to the other inmates and I, but honestly I would’ve been content without them,” Clardy wrote. “Out of the entire ACC population, only 10 of us were chosen to participate in the class, so we already felt honored to have been accepted.”

Lessons from “Incarceration and Inequality” have already had an impact outside the W&L campus and the prison walls. Swabb was inspired to start a branch of the Nabors Service League called Strong Returns, which collected hundreds of books for the Rockbridge Regional Jail library. She got the idea during a tour of the jail.

“When we saw the library that they had, we were like, ‘Oh my God, it’s not a library — it’s a shelf full of old Westerns that are falling apart’,” she said.

Joyner and Clardy are still pen pals. Clardy has emailed his college friend asking about his summer or how the other W&L students are doing. Joyner fills him in, but he said it makes him a little sad to share details about fun experiences on the outside.

Meanwhile, Clardy says he has “fallen back into the stagnation of prison life,” so he eagerly awaits receipt of the piles of homework he’ll get to do for the next class.

“I was told this class will be more philosophical than the last one, so I’ve already started dissecting the concept of freedom and how it’s affected by various factors,” he wrote. “This is a topic that can be analyzed from an infinite number of facets, so I’m very eager to hear some of the other students’ theories and to share my own. I can’t wait!”