“From my time abroad I have gained insight, understanding and appreciation for the culture in Costa Rica, the people of Nicoya, and the Spanish language as a whole.”
~ Diana Banks ’15 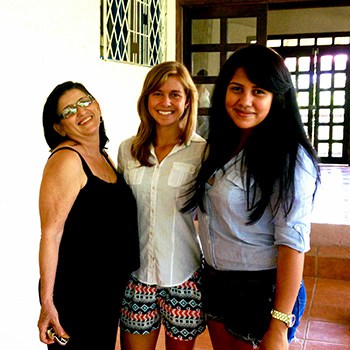 A lot of people take a Spanish class. At one point or another, most people take an introductory course, a conversation course or maybe an occupation-specific course, just because Spanish is a very prevalent language here in the United States.

I was definitely one of those students, taking Spanish class after Spanish class through middle and high school, going over the same verb tenses every year and forgetting them all every summer. With my Spanish professor’s assistance through the Latin American Caribbean Studies Department at W&L, I was able to travel to Costa Rica, where I spent two months learning and committing myself to this language; I was living, working and learning in Nicoya.

I couldn’t have asked for a more authentic and all-encompassing experience. My time was spent living with a host family, and my familia Costarricense took every opportunity to show me their lives, engage me in conversation–no matter how broken it was at first!–and include me in their fishing trips, beach weekends and World Cup parties (Fútbol in Costa Rica is quite the phenomenon!). I learned the finer points of Costa Rican cooking from my host mother–gallo pinto, chorreados, camarones, olla de carne–the food was absolutely incredible. I felt welcome, and I credit their effort to include me as the reason why I even began to feel more like a native than a tourist towards the end of my time with them.

I spent my mornings between 8:00 a.m. and 12:00 p.m. taking formal Spanish lessons at the Academia de Español Nicoya, and for all 8 weeks of my experience I was in an individual, 1-on-1 class catered to my language ability at the time. These classes gave me a better blueprint of the Spanish language than I had ever had before, and the casual but fully-immersed nature of the lessons finally allowed me to build a strong foundation for moving past the wall I had always been hitting. I had so much fun at the Institute, and even ended up extending my classes from four weeks, as was originally planned, to eight weeks. With my professor I learned more than just grammar. I learned about Costa Rican popular culture and current events in the Central American world; I learned jokes and slang; and I was able to talk with my professors like I would with a friend, asking any questions that had come up since seeing them the day before.

In the afternoons, I spent the majority of my time at Café Daniela’s working as a waitress. This part of my trip pushed me back into the real world. None of the clients knew I didn’t normally speak Spanish, and it wasn’t a classroom environment where mistakes were expected and easily corrected. I felt comfortable at Daniela’s, though, and the waitresses, cooks and owners definitely stood up to their local reputation as “a restaurant of great friendship.”

I also spent some of my time working with another girl in Nicoya who was about my age, and she was starting a nursing job at the hospital during the time I was there. We became “partners in learning” through the Institute, and built a real friendship around the exchange of our two languages. She needed to know English to converse with American patients at work, and I was ready to learn as much Spanish as I possibly could. My relationship with her may have been the most special for me, and I gained a lot from seeing my language struggle from the other side.

From my time abroad I have gained insight, understanding and appreciation for the culture in Costa Rica, the people of Nicoya, and the Spanish language as a whole. Doing this has changed my thoughts and plans for the remainder of my time at W&L, and I am sure I will be pursuing more opportunities in Spanish beyond my college years as well.