Terry Vosbein, professor of music at Washington and Lee University, has released his latest CD, “La Chanson Française ” (Max Frank Music). The music includes a dozen classic songs that originated in France, interpreted and swung by a jazz nonet.

“Every musician is a strong soloist and their improvisations are logical extensions of the colorful ensembles, which often have the nine-piece group sounding like a big band,” Vosbein said.

Many of the melodies were made famous by such French legends as Édith Piaf, Jacques Brel, Charles Aznavour and Charles Trenet. Among the more familiar songs that are transformed into creative jazz are “What Now My Love” (“El Maintenant”), “La Vie En Rose,” “Beyond The Sea” (“La Mer”), “I Wish You Love” (“Que reste tíl de nos amours”), and “Under Paris Skies” (“Sous le ciel de Paris”).

Vosbein, who has spent extended periods living and composing in Paris, said, “Piaf, Brel, Trenet and Aznavour were as much a part of my experiences as Hemingway, Picasso and Stravinsky. Each day as I strolled through that magical city I would hear their songs, from street musicians, from club performers, from whistling pedestrians. For this project I set out to recast those familiar melodies in a cool jazz mold, retaining the spirit of the originals, but embedding them with my own swinging vision. I examined over a hundred poignant songs before deciding on these. It was impressive that so many classic French songs were composed by the very performers who made them famous.”

Among the highlights are the trombone feature on “L’Accordeoniste” (which is a bit reminiscent of J.J. Johnson and Kai Winding in the 1950s), the infectious ensembles of “Ménilmontant,” trombonist Lundberg’s warm playing on “La Vie En Rose,” altoist Tom Artwick’s showcase on “If You Go Away,” the interplay of the two trumpeters on “Beyond The Sea,” and the Count Basie feel of “Non, je ne regrette rien.”

Vosbein said, “Upon completing a dozen new arrangements, and totally under the spell of these great songs, I decided to compose an original work. I spent a recent summer living in old Montmartre. I tried to capture the sounds, sights and smells of that unique village on the hill overlooking Paris in this new Chanson Française, ‘Dans le vieux Montmartre.’ It’s a hard swinger that fits in well with the vintage material of ‘La Chanson Française.’ ”

His favorite part of the project was the recording session. “Once the music was arranged the real fun began,” he said. “The notes that I write are just dots on a page until the performers turn them into a living, breathing and swinging organism. It was a thrill to have these good friends and seasoned veterans of the jazz world bringing my creations to life.

“And it was a bit scary. We had just one shot at each selection. There were no second takes in this concert/recording session. The virtuosic playing and superb improvisatory talents of these nine musicians is astounding and I couldn’t be happier with the results.”

Born and raised in New Orleans, Vosbein grew up as part of a musical family. Trained as a classical composer, he has written works for ensembles ranging from choirs and wind ensembles to symphony orchestras. He has been awarded six summer residencies at La Cité Internationale des Arts in Paris and a fellowship at University College in Oxford. At W&L, he teaches music composition.

However, Vosbein’s roots are in jazz, and in recent years he has recorded a series of jazz projects. These include “Come and Get It!” (a suite for his nonet), “Progressive Jazz 2009” (featuring the Knoxville Jazz Orchestra), interpretations of the music from “Sweeney Todd” (Fleet Street), and “Stradivarius Christmas” (Yuletide favorites for violin and piano).

With the release of “La Chanson Française,” Vosbein celebrates both the richness of French music and the swinging creativity of jazz.

“This accessible set will be enjoyed by a wide audience,” he promised. “Sit back, prepare your favorite French beverage (mine is café crème) and enjoy these fun selections. Toe tapping is sure to follow. Dancing is optional.” 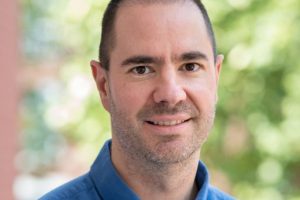