The Alchemist Sean Fowler ’99 makes the taste buds sing with his Southern-inspired cuisine. 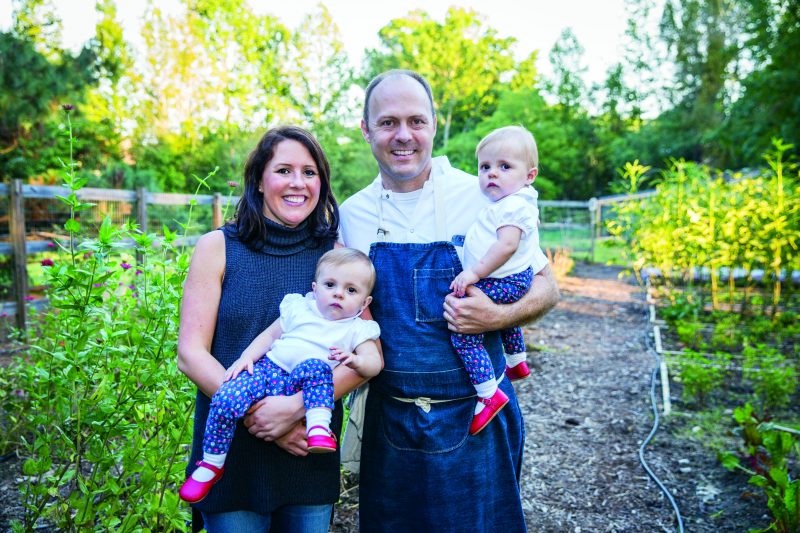 Sean Folwer ’99, his wife, Lizzie, and daughters, Clementine and Grace.

“I told them anyone can make a good meal for a critic, but this is a long-distance race.”

Sean Fowler ’99 had no plans to own a restaurant after he graduated from W&L. His father was a restauranteur, and he resisted the notion of following in his footsteps. But after what his father termed “a retirement in reverse” spent skiing and playing in the mountains in Jackson Hole, Fowler found himself increasingly drawn to cooking and particularly to the artistic aspects of food.

Not quite ready to move back East, he trained at the Johnson and Wales campus. From there he made a name for himself at Le Bernardin in New York City and Fearrington House Restaurant in Pittsboro, North Carolina, before deciding he was ready to pilot his own ship. He and wife, Lizzy, returned to his hometown of Raleigh and opened Mandolin in the city’s historic Hayes Barton neighborhood in 2011. His spectacular success has helped elevate Raleigh to prominence on the culinary scene. Open Table recently ranked Mandolin one of the top 50 restaurants in the South.

“Southern food gets distilled into standard dishes, Fowler commented. “But people from all over the world live and cook here. Purists might complain, but it creates a bigger tent tor people to dine under. Seeing ingredients used in new ways is exciting for me as a chef and consumer.”

Although Mandolin drew critical raves from the start, Fowler cautioned the staff against overconfidence. “I told them anyone can make a good meal for a critic, but this is a long-distance race. It’s been an evolution. We added brunch early on. It was slow to build, but now it’s our busiest meal. We also added a bar menu. At first, people put us in the fine dining category — we had white tablecloths, and the wait staff were very nicely dressed. Raleigh has never fully embraced fine dining. They want a comfortable, relaxed atmosphere. We softened the edges, lost the tablecloths. The changes came from guest feedback. It is in my best interest to take those things to heart,” he noted.

Fowler sources his produce, seafood, meats and cheeses from local and regional vendors. “The supply chains for smaller growers have really improved since I’ve been here. Companies like Cheney Brothers of Florida are helping. The growers were good at selling at a market, but not set up to distribute. It was challenging to get food to restaurants. It’s nice to see there is enough demand for locally sourced food.”

The Fowlers also operate Mandolin Farm, where they grow flowers to ornament the restaurant’s contemporary farmhouse décor and rare ingredients like cucamelons and Jerusalem artichokes. They also raise chickens to lay the deep yellow-hued eggs whose flavor astounds brunch-goers.

Fowler’s interest in locally sourced foods extends beyond the restaurant. After attending a workshop sponsored by the James Beard Foundation, he joined other area chefs in advocating for better quality school lunches. As part of that effort, he recently agreed to create a menu item within school lunch guidelines. It wasn’t easy.

“The challenges are palpable, even among trained chefs, between budget and nutritional requirements, not to mention what kids will eat.” Fowler says. “It gave us insight. We would like to see the state legislature increase funding and tie it to sourcing ingredients from North Carolina farmers to support the poorer agricultural counties in the state. They grew potatoes, kale, collard greens. We could be serving those to students, but we’re not.”