The Beat Goes On Amid the COVID-19 outbreak, some Washington and Lee University journalism students learned that the news stops for nothing — not even a global pandemic. 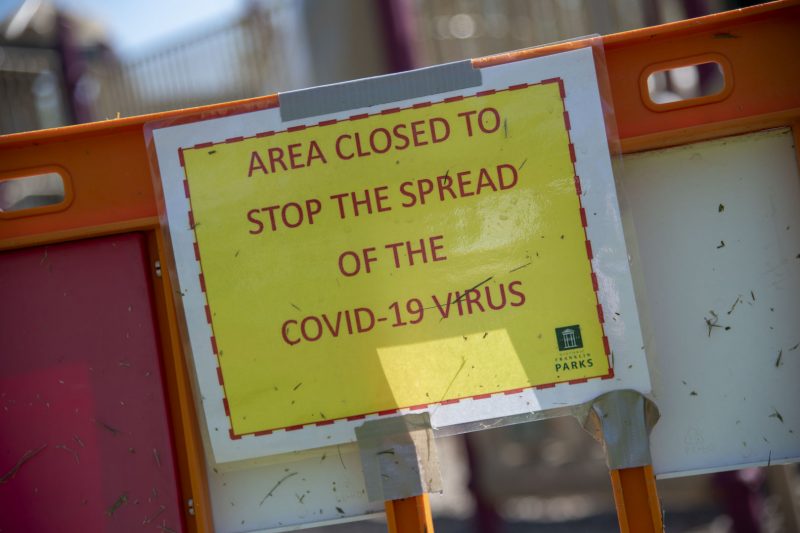 Isaac Thompson ’21 shot this photo in Franklin, Tennessee for a Rockbridge Report photo essay about how COVID-19 had impacted his hometown.

“It felt like a crash course in real-world journalism, and I am very appreciative for the experience despite the circumstances.”

Students working for W&L’s Rockbridge Report are required to engage with the community, write articles and report them on TV and the web, so when COVID-19 shut down the campus and necessitated social distancing, those budding journalists and their professors were faced with a predicament.

In response, they did what all good journalists do: They adapted. With a new and creative approach, they told the stories of their own pandemic experiences.

“I’m pleased that we were able to be creative, to be flexible and to produce what I thought were good pieces of journalism,” said Professor Toni Locy.

Students from several classes in the Department of Journalism and Mass Communications report, write and produce the Rockbridge Report (RR), which airs every Thursday during the fall and winter terms on cable access Channel 18. They also update its website and promote content on its social media channels. The classes involved in the Rockbridge Report over Winter Term 2020 included Locy’s four students in Beat Reporting; Professor Kevin Finch’s one student in Producing for Television and Online; and two of Professor Mark Coddington’s classes, Intro to Digital Journalism and Social Media: Principles and Practice.

Immediately upon receipt of President Will Dudley’s email about the transition to virtual instruction, Locy sent her students a text message. “I said here is what I want you to do,” Locy said. “I want you to start keeping a journal and write down what you are seeing, hearing and feeling … pay attention to everything that’s going on around you because when classes resume in two weeks, I am going to ask you to do essays about the experience and the journey to wherever you end up.”

Beat Reporting students do not typically write first-person pieces for the class; in fact, Locy said, first-person news writing usually makes her cringe. But she knew it would be necessary under the circumstances.

Isaac Thompson ’21 produced a piece about his return to Franklin, Tennessee, where he was immediately confronted by the health and economic implications of the virus. His disabled stepfather is considered high-risk for COVID-19, and his mother’s in-home sewing business had slowed substantially. “The uncertainty of this unprecedented time has and will continue to test our drive and tenacity,” he wrote. “But I have watched friends and strangers come together to get through this, even while they are physically separated.” Thompson also shot eerie pictures of deserted places in his hometown and turned them into a photo essay.

Sophie Kidd ’22 wrote about her return to Houston, where the pandemic has changed everyday life in both small and profound ways. Jackson Sharman ‘22, who remained in Lexington, wrote about how fellow students and the local community responded to the crisis. James Laverty ’21 wrote a timeline of events “from normal to pandemonium” that included his realization that he would be safer in Lexington than returning to his hometown near New Rochelle, the epicenter of the outbreak in New York. “I now have three friends back home who have relatives who have passed away from the virus,” Laverty wrote. “I only expect that number to go up.”

The Rockbridge Report newscast was not an option with campus closed, but it was possible to keep the website updated. In a group effort, the students and professors created a special tab on the website just for COVID news. Students in Coddington’s social media class promoted reporters’ work on Twitter, Instagram and Facebook. Jimmie Johnson ’20, the student-producer in Finch’s class, pivoted from producing the newscast to producing the website only, which involved deciding how stories should be displayed.

“This class was the perfect way to finish my career in the Journalism Department,” Johnson said. “It combined all the things we have learned, including writing, editorial judgment and quick thinking, and tested them. Throughout your career in the journalism school, you assist with the Rockbridge Report in different areas. It was cool to finally sit in the producer’s chair and run the whole show.” 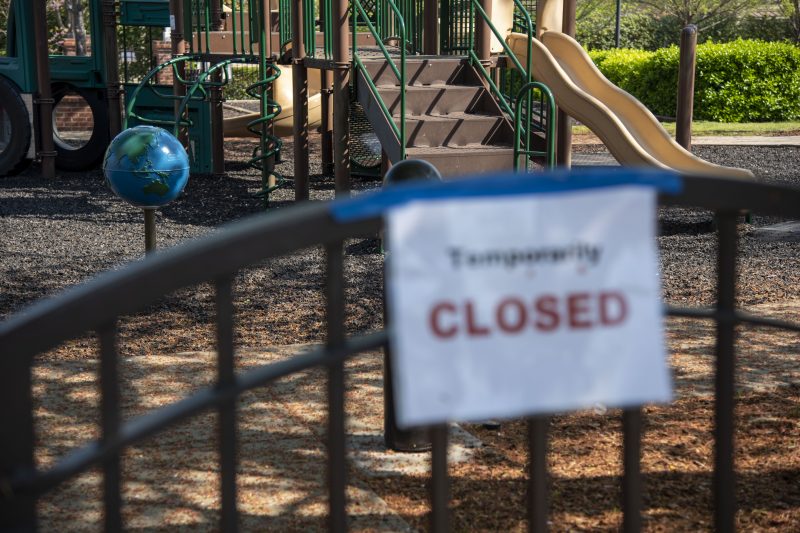 A playground closed to children in Franklin, Tennessee, shot by Isaac Thompson ’21 for a Rockbridge Report photo essay about COVID-19.

Part of the social media strategy included short videos of the Beat Reporting students discussing their stories and how the pandemic had impacted their information-gathering process. Three of those four students have radio shows on W&L’s radio station, WLUR, including Sharman, who decided he wanted to produce a podcast about the experience. Sharman created one episode about how local restaurants were adapting during the pandemic, and he teamed up with Kidd on a second episode about the W&L administration’s effort to come up with a Plan B for the Class of 2020 Commencement.

“The situation rattled all of us, but I wanted to give them a chance to experiment with different methods of storytelling,” Locy said. Because the circumstances forced Locy and the class to loosen up and embrace those different methods, they were able to gain valuable experience. “There were a lot of good things that came out of the last three and a half weeks of the term,” she said.

Thompson and Johnson said that through the process of adapting to the situation, they learned more about how to work in high-pressure situations.

“I gained a great level of independence due to the pandemic, especially when it comes to my reporting,” Thompson said. “I was forced to step out of my comfort zone, reporting on my own area and making creative decisions that I would’ve been too nervous to make before. It felt like a crash course in real-world journalism, and I am very appreciative for the experience despite the circumstances.”

Johnson recalled that during the Rockbridge Report’s last broadcast, they had to announce mid-show that March Madness had been canceled and Disneyland was closed. “It was a stressful situation, but I enjoyed the environment, and that is how real newsrooms have to function. I feel like following and reporting on COVID added a new level of realism to the class. We were one of the only sources of news in the Lexington area for a worldwide pandemic.”

During normal times, Locy said, the Rockbridge Report requires so much work and coordination that it’s kind of a “weekly miracle.”

“It was beyond special in today’s difficult times,” Locy said. “All the students stepped up and finished strong, despite the challenges of a worldwide pandemic. I am so proud of them.”