The Shape of the Maury Robert Humston's Aquatic Ecology class collected ecological data about the Maury River in preparation for the removal of Jordan's Point Dam.

“The class is focused on aquatic ecology, but the overarching context for the class this year is the impact of dams on rivers and the potential for restoring those waterways through their removal.”

~ Robert Humston, associate professor of biology and director of the Environmental Studies Program 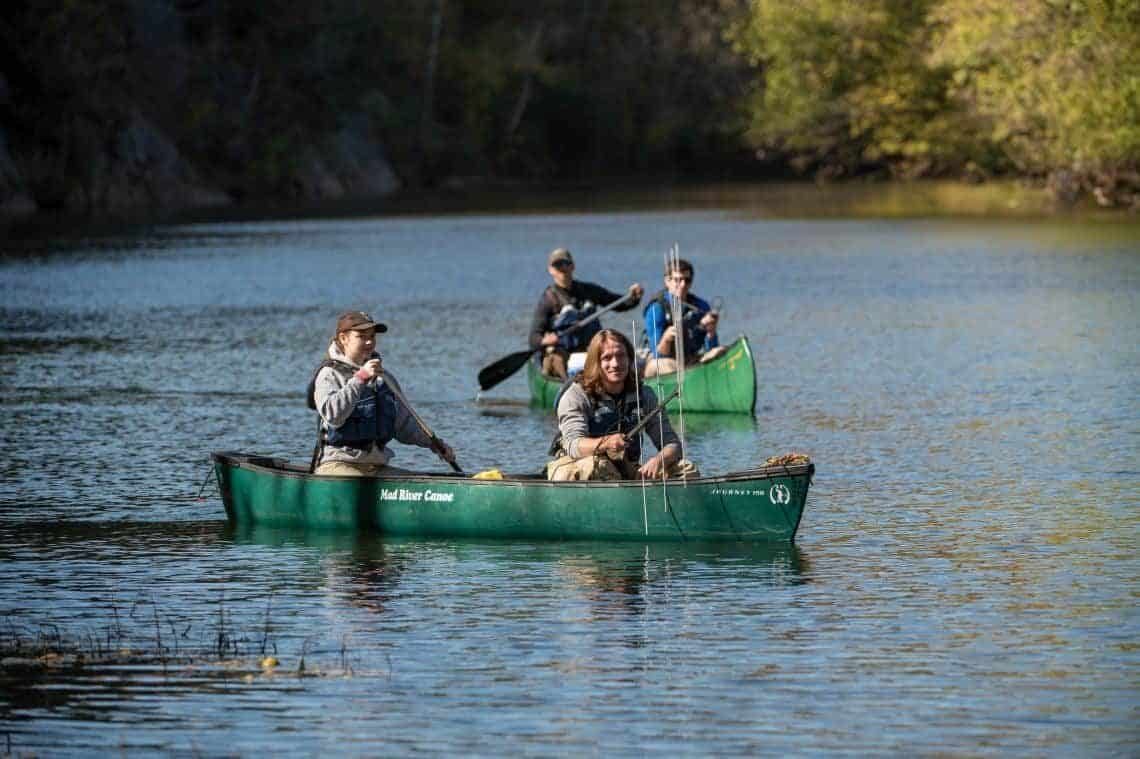 The Aquatic Ecology class used antenna and radio receivers to monitor the movement of smallmouth bass they had tagged and released into the Maury River earlier in the fall term.

On a beautiful fall day last term, Robert Humston, associate professor of biology and director of the Environmental Studies Program, and his Aquatic Ecology class floated down the Maury River, two to a boat, tracking the location of smallmouth bass they had tagged and released several weeks earlier.

Their mission? To collect ecological data about the Maury River, both above and below the Jordan’s Point dam, for the Virginia Department of Game and Inland Fisheries (VDGIF).

This was not the first time Humston’s classes and summer research projects have focused on regional environmental issues. He and his students have monitored smallmouth bass in the James River and investigated pollution levels in Hays Creek, both part of the Chesapeake Bay watershed, and shared that data with the VDGIF.

The current project zeroes in on an environmental issue closer to home. In winter 2018, Lexington City Council approved an agreement between VDGIF and the city to remove Jordan’s Point dam, following a 2007 inspection report that revealed significant structural issues. The dam is a well-known landmark that once supplied power to a milling business, and the pool created by the impoundment is a popular recreational site for both boating and fishing. Removing the structure will alter riverine habitat. The question is, by how much?

The answer, in part, required a closer look at habitats of the Maury River. The state DGIF requested Humston’s help to examine a six-mile stretch of the river, starting at Beans Bottom and ending at the Interstate 81 overpass, which marks the two-mile point on the Chessie Trail. “The class is focused on aquatic ecology, but the overarching context for the class this year is the impact of dams on rivers and the potential for restoring those waterways through their removal,” Humston explained.

“This project has really resonated with the students,” Humston added. “Partly because they use Jordan’s Point recreational area themselves and partly because they see the data being used in a meaningful way by the state agency. The students get a lot of hands-on time learning useful research techniques, and we provide additional research and monitoring capacity for the state biologists. We also get to spend a lot of time on the water, and it is a beautiful river — one of the more scenic rivers I’ve ever paddled.” 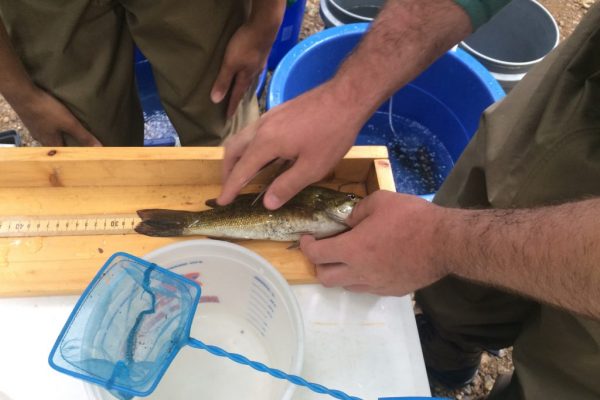 Collecting data on a smallmouth bass.

The first step was to radio tag 20 smallmouth bass. Some were released upstream and some below the dam. “The tags should last about a year, so that after the dam’s removal, we can see how their movement patterns change,” said Humston. “Hopefully, we’ll see more fish moving upstream, past the dam footprint to access the habitat that’s up there. The habitat upstream of the dam right now is slow and a bit murky. That’s roughly a mile of flat water, and it’s not a great spawning habitat for smallmouth bass, which are the real flagship freshwater species and sport fish. There’s a lot of hope and expectation that by removing the dam we’ll create better spawning habitat for the smallmouth bass.”

Students also logged water temperatures along the river’s bottom and documented the macroinvertebrates, as well as the flora and fauna communities. The plan is to tag more fish in the spring and monitor their movements during spawning season.

“This class served two purposes, “Humston said. “We did research and provided service to the community by helping the state document the possible impact of removing the dam. There are structures like this all over the state of Virginia, and more and more of them are going to be called up for potential removal. Many were originally built for flood control and hydropower, but they have outlived their usefulness and have become an economic liability.”

The data collected will also help address some of the concerns of the local residents. “We’re analyzing the vegetation along the banks of the reservoir section,” said Humston. “As those water levels drop after the dam removal and the banks are exposed, there is concern that vegetation will be slow to recolonize those banks or that we could end up with a whole bunch of invasive species in there. By taking note of what’s there now, we can revisit these sites later to document any sort of change.

“All of that data can help the state and localities inform future land-use decisions. In the long run, we can help the state in outreach efforts when individual municipalities raise the question of whether removing their dam is the right thing to do.” 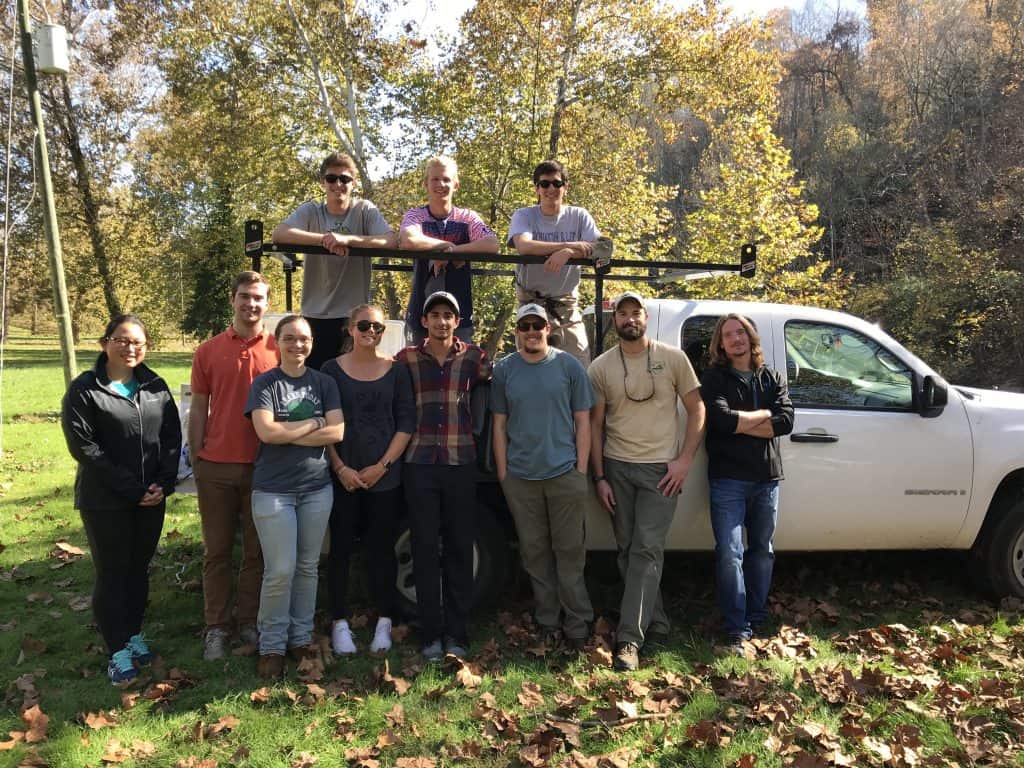