The Voice of the Maritime Aquarium Marketing maven Tina Tison ’95 is inspired by tradition and innovation. 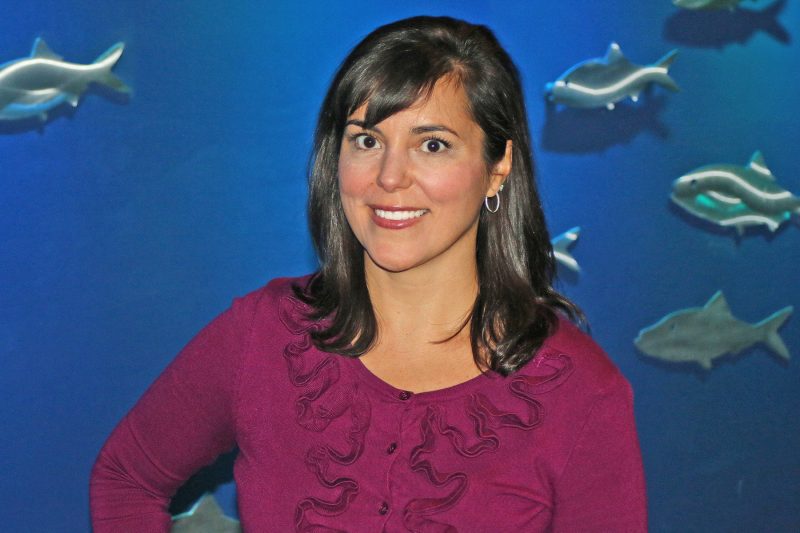 The balance of tradition and innovation was appealing to Tina Tison when she first learned about Washington and Lee University. The strength of its heritage spoke to Tison, who grew up in a family with strong religious, cultural and ethnic traditions. The university was just a few years into coeducation when she visited the campus as a high school junior. “Before I made the trip, I was fascinated by the concept of a place so steeped in tradition embracing such a dramatic change,” she said.

The visit was a seminal moment for Tison. “It was love at first sight,” she said of first seeing the university – the only place she applied to.

As director of marketing for The Maritime Aquarium in Norwalk, Connecticut, Tison has continued to employ the balance of traditional and progressive thinking as the foundational principle of her career and personal life.

At home, both she and husband, Joe ’95, keep family traditions alive, while creating their own unique traditions with their children.

In her professional life, she used her journalism degree as a springboard to a job in the advertising business after graduation. Beginning with agency icon Young & Rubicam, she moved during the next 10 years to two other powerhouse agencies — Ogilvy & Mather and Grey Worldwide in New York City — before moving to a small, entrepreneurial firm in Connecticut.

The three large, New York City-based agencies “were time-tested and attracted fantastic brands as clients,” she said, citing P&G, Kraft, Campbell’s Soup and ConAgra Foods. “It was so fulfilling to be learning and advancing my career with those projects and brands.” Her efforts were rewarded with multiple Effie Awards for advertising effectiveness.

As her family life became more Connecticut based, Tison “found an opportunity to take everything I learned and go to a small ad agency, where the clients were entertainment brands.” At Media Storm in Norwalk, Connecticut, she worked with such clients as FX, Food Network and ABC Family, leading integrated consumer marketing efforts that broke network and industry records for ratings.

The entrepreneurial culture of Media Storm was “fantastically rewarding,” said Tison. Entertainment brands are water cooler topics, and both the entertainment and ad industries were going through many changes. When she began, there was no Netflix, streaming-TV shows or On Demand. “There were some familiar challenges and some new challenges. It was a balancing act of using proven best practices and experimenting with new ideas to stay relevant.”

Media Storm had an advantageous location as well, sitting directly across the street from The Maritime Aquarium — rated the top aquarium in New England. Tison’s family became regular visitors to the aquarium and her children – Samantha, 10, and Trey, 7 – participated in camps and in-depth educational programs there.

When she happened to spot a job announcement for a marketing director on the aquarium’s website, she “ran at it with enthusiasm reminiscent of my first visit to W&L. I knew where I was meant to be,” she said.

At the nonprofit aquarium, Tison is part of the senior staff and leads everything from press releases to advertising. She and her team also execute monthly visitor events and all promotional messages to support those events. They also constitute the digital voice of the aquarium on social media and the website.

“The aquarium is a remarkable institution,” Tison said. “It has a strong heritage of education and animal husbandry.” The aquarium’s mission is to educate visitors about and to create stewards for Long Island Sound. Visitors can get close to more than 250 species native to the sound and its watershed, including sharks, seals, sea turtles, river otters, jellyfish and other animals. Tison said her goal is “doing great by doing good,” and her current role fulfills that every day. “I feel so honored to be the voice of the aquarium, its mission and all of the species in our care.”

At W&L, Tison was guided by the “entire team of professors at Reid Hall. They were incredibly influential to me.” She had always been a book enthusiast and loved the power of words in literature and poetry. However, it was her journalism professors, including her advisor, Bob de Maria, who “inspired me in class and conversations with the power of words in their most succinct format. I learned to be as effective as possible in the shortest form.”

That lesson served her well as an advertising executive. While watching 30-second TV or digital ads or driving 70 miles-an-hour past a billboard, consumers don’t have much time to absorb a message. “Ads have to be succinct yet dynamic,” said Tison. “In today’s world, there is less time and more noise.”

Outside of class, Tison was a charter member and officer of the university’s Pi Beta Phi sorority and held leadership roles with the yearbook, Super Dance and Fancy Dress Ball. She also held down a job in the dining hall.

Although she and Joe, a vice president at a financial technology company, graduated together, both came from Connecticut and had mutual friends, they didn’t connect as a couple until meeting again at an alumni gathering in New York City two years after graduation. Now together 20 years — 15 as a married couple — they enjoy taking their children to visit W&L and sharing the university’s traditions.

“Washington and Lee was such a special place and experience for both Joe and me. Love of W&L is one of our favorite traditions to celebrate and pass along to our kids.”