Washington and Lee University is proud to announce this year’s Distinguished Five-Star Alumni Award winners, Thomas B. Bryant ’59, ’61L, Judson P. Reis ’64 and J. Bruce Whelihan ’64. They will receive their awards during the Five-Star Festival, September 12 – 14, 2019. 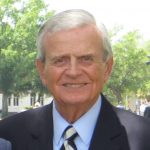 A member of Kappa Sigma, Tom was also involved in the Cotillion Club, the Interfraternity Council, the Ring-tum Phi, was a class officer and played varsity golf. After graduating W&L with his law degree, Tom joined Bryant, Fanning and Shuler, where he has practiced ever since.

Tom has been involved in South Carolina politics, serving in the SC House of Representatives from 1969 to 1973. He is a member of Phi Delta Phi, the international legal honor society and was a director of Citizens and Southern National Bank from 1991 to 2008. In 2017, the Orangeburg County Bar Association presented Tom with the Honorable Karen Johnson Williams Award in recognition of outstanding leadership and the person who best exemplifies that which brings honor, esteem and respect to the legal profession.

Tom has been active with W&L, serving on four reunion class committees and on the Law Council. He and his wife Linda have been generous supporters of the university, in particular the The Class of 1959 – Francis Pendleton Gaines Scholarship and Colonnade Maintenance Endowment. They live in Orangeburg. 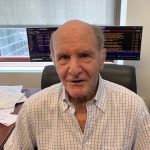 Jud has had 2 and ½ careers, 25 years as an investment banker, primarily with Morgan Stanley; 28 years in investment management at Sire Management, a company he founded in 1991 and; for the ½ career, one full academic year as the Morris Visiting Professor at the Darden Graduate School of Business at the University of Virginia followed by several years of teaching a course at Darden in the spring.

Jud is still President of Sire Management Corporation and is grateful to be able to continue in the investment business. He served as a Director of Pilobolus, a modern dance company, and is currently a Trustee of the Skowhegan School of Painting and Sculpture, where he was President from 1994 to 2008, a Trustee of the Pomfret School, and a Trustee of the William T. Grant Foundation, whose mission is to improve the lives of young people.

An active alumnus, Jud has served on two reunion class committees and is a loyal contributor to the Annual Fund. Jud resides in Manhattan, is married and has five grown sons, three daughters-in-law, five grandchildren and one granddaughter-in-law. 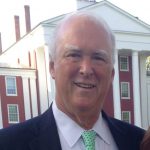 A journalism major, Bruce was a member of the Southern Collegian, Troubadours, and was active in the theatre. After receiving his M.B.A. from the Wharton School of the University of Pennsylvania, Bruce was a commercial banker in New York for Irving Trust Company. Bruce left Irving in 1968 to work on Richard Nixon’s presidential campaign. He followed Nixon to Washington in 1969 and worked in the White House as a Staff Assistant in the White House Press Office until Nixon’s resignation in 1974.

After the Nixon administration, Bruce went to work for Alex Brown & Sons, then the oldest investment banking firm in the country. He is now a partner and shareholder of Brown Advisory, which traces its roots to Alex Brown.

Bruce has been an active, loyal and generous alumnus. He was on his 50th reunion committee and is a regular supporter of the Annual Fund. He contributed generously to the restoration of the gardens at Belfield, Dean Gilliam’s home, and to the Honor the Past, Build the Future capital campaign for W&L. Bruce has served as a Trustee of the National Cathedral School and of Tudor Place Historic House and Garden. He and his wife, Alice, reside in Washington, DC. Their daughter Sarah is W&L Class of 2015.