Washington and Lee University is proud to announce this year’s Distinguished Five-Star Alumni Award winners, Howard E. Jacobs ’58 and the Rev. E. James Lewis ’58. Howard and Jim will receive their awards during the Five-Star Festival, November 1-3, 2018.

A history major, Howard was a member of Phi Epsilon Pi, the swimming and diving team and the Interfraternity Council. He is currently chairman at R&R Marketing, a wholesale distributor of wines, spirits and beverages. After receiving his MBA from Cornell University in 1961, Howard attended and graduated from the Provost Marshal General School for officers at Fort Gordon, Georgia, and was assigned to the Armed Forces Police in New York as a second lieutenant. He was working for Butte Knitting Mills when he was recalled to active duty; upon his release in September, 1962, he resumed his position there.

In addition to establishing The Hortense Jacobs Scholarship at W&L in honor of his mother, Howard has served on his reunion class committee three times. He has also served as a board member at East Orange Hospital, United Community Fund, United Jewish Appeal and Essex County Heart Association. Currently, Howard is vice president and on the board of directors for the Wine and Spirits Shippers Association Inc and is a trustee of the New Jersey Performing Arts Center. He and his wife, Margaret, have two children and live in West Orange, New Jersey. 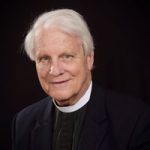 Born in Baltimore, Maryland, Jim was a philosophy major and All-American lacrosse player at W&L, where he was later inducted into the W&L Athletic Hall of Fame. Following graduation he served as an infantry officer in the U.S. Marine Corps, with duty in Southeast Asia. Jim graduated from Virginia Theological Seminary (VTS) and was ordained in 1964. While at VTS, he was a chaplain to students at Episcopal High School, and began the lacrosse program there. Ordained in 1964, he has served parishes in Maryland, West Virginia and Michigan, and did diocesan social justice work in the Diocese of North Carolina and the Diocese of Delaware.

Including years of pastoral care work, Jim did extensive prophetic social justice work. He was the co-founder of North Carolina People of Faith Against the Death Penalty in North Carolina and in Delaware with “The Way Home” program, a rehabilitation program for ex-offenders. Jim also co-founded West Virginia Patriots for Peace, resisting the Iraq and Afghanistan wars. He was a delegation member in peace and justice trips to Cuba, Libya, Iraq, Jordan and Israel/Palestine. His work with immigrant poultry workers and poultry growers in the Delmarva Peninsula was featured on “60 Minutes” with Mike Wallace.

Jim married Judith Graham, a Sweet Briar graduate, in 1958. An oncology nurse, she suffered an illness in her own specialty and died in 2013, after 28 years with breast cancer. Married 55 years, they had a son, Stephen (who died Aug. 23, 2018), and three daughters, Elizabeth, Katherine and Deborah. Jim has nine grandchildren. He lives in Charleston, West Virginia.