University Singers Perform Annual Commencement Concert The May 25 event is free and open to the public to view online. 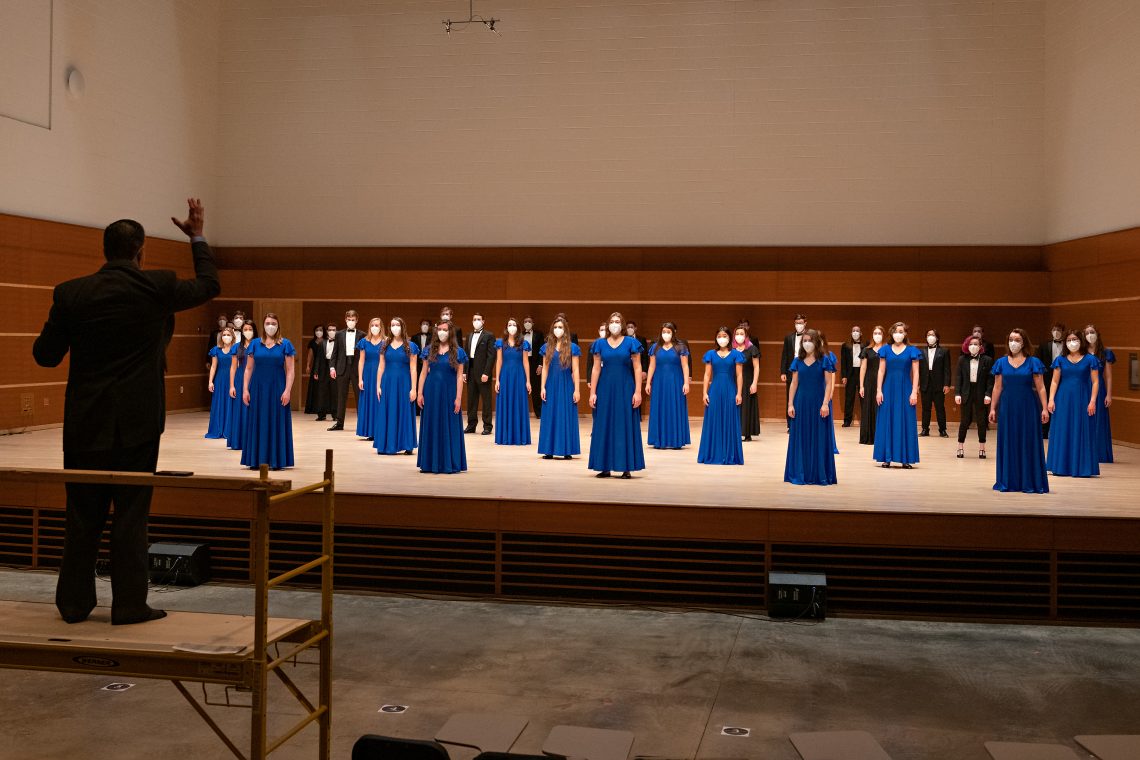 Associate Professor Shane Lynch directs the University Singers from atop scaffolding, where he can see and hear them better as they spread out to mitigate the risk of spreading COVID-19.

The Washington and Lee University Singers will present a final performance for the academic year under the direction of Shane M. Lynch on May 25 at 8 p.m. in Wilson Concert Hall. The concert is free and open to the public to view online at https://livestream.com/wlu.

“This concert is special because it is the first one we have been able to hold in person since March 2020,” said Shane Lynch, director of Choral Activities and associate professor of music. “Thanks in part to updated guidance from the Centers for Disease Control and the university administration, members of the University Singers are allowed to invite up to four people to the concert.”

The concert will feature favorite works selected by the seniors, focusing mainly on highlights from their time at W&L. Musical styles presented will represent a wide variety of choral genres, including a new work by Slovenian composer Samo Vovk. As always, the group will close the concert with “Shenandoah,” arranged by James Erb.

The University Singers continue to be recognized as one of the finest a cappella choirs in the region. Every year, the group tours nationally or internationally, performing a wide variety of literature across the globe while serving as artistic ambassadors for W&L in concert series, festivals, competitions and conventions.

“The commencement concert began in part because there are always a decent number of University Singer members who have family that have never seen them perform live,” Lynch said. “Given the challenges from the current year, I cannot express how delighted the group is to finish out the year with a live performance. This opportunity to perform live is every bit as meaningful as being able to travel abroad and perform. While the livestream technology is amazing, it’s just not the same as performing for an audience in person. This concert gives us a chance to sing for family and friends one last time.”