University Singers to Perform at Carnegie Hall April 1 The group was chosen to perform, along with only three other choirs from around the nation, after a highly competitive selection process.

“There are so many opportunities that we have in the University Singers that other people in a choir at a small liberal arts school would never even dream of, and I attribute those opportunities to the hard work of Dr. Lynch.” 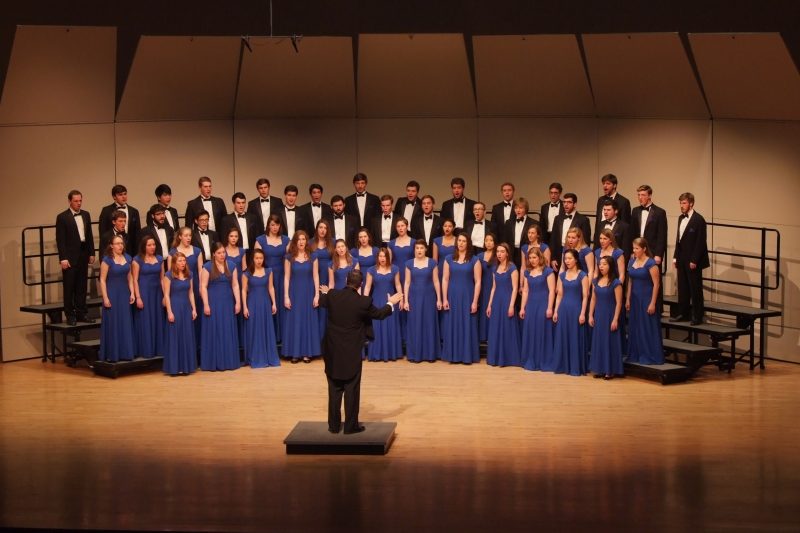 Washington and Lee University has had a strong choral tradition since its first group, the Men’s Glee Club, was established in the 19th century. But W&L choirs have not always competed on a national level. Now, thanks to hard work and solid leadership, that is beginning to change.

On April 1, the Washington and Lee University Singers will take the stage for the Collegiate Choral Showcase at Carnegie Hall in New York. Earning the invitation was a highly competitive process, and the W&L group is one of only four collegiate choirs from around the country that were chosen.

“This is a wonderful accomplishment for our University Singers,” said W&L Provost Marc Conner. “It’s a testament to the incredible hard work and dedication of Director Shane Lynch and all of the students involved. I’m delighted to see this recognition of the tremendous performing arts programs at Washington and Lee.”

The Carnegie Hall news came about the same time Lynch, W&L’s director of choral activities, received word that the University Singers had been selected to perform at the American Choral Director Association’s National Conference. Because they could not do both, Lynch said, they selected the invitation that came first. But having to make the choice was “a great problem to have,” he said.

To vie for a spot in the Collegiate Choral Showcase, Lynch submitted several years’ worth of recordings of the University Singers, including a couple of songs per year. He also had to submit a sample program for the concert, which will include about eight songs per group.

Judges want to know that a group has the ability to sing a number of different songs well and that the quality of the choir has been sustained over the course of several years despite the annual turnover that is inevitable in any college choir. University Singers has 52 members, and about 40 to 50 percent graduate each year.

Lynch has been the director of choral activities at W&L since 2009. In 2013, the University Singers were invited to sing at the Virginia Music Educators Association’s state conference. “That was the first time a W&L ensemble had ever been accepted to perform at VMEA,” he said. “That was a huge step forward with blind peer review of the ensemble. It put us onto a little bit of equal footing with other Virginia schools that are more known for their music programs.”

The following year, the group sang a featured performance at the National Cathedral, which Lynch said was “another step up.”

“What has been fun about it from my end is that each class, and each iteration of the choir, has tried to rise to meet the challenge,” he said. “And then the next class is [asking] what do we have to do to meet the next one? It’s nice to see how we have been able to keep moving up the ladder to more exciting performances and options.”

Jake Burnett, a senior music major and member of University Singers, said being part of a group that is constantly striving to improve has been inspiring.

“When I first arrived at Washington and Lee and I joined the Men’s Glee Club, I had no idea what I was in for with the choral program. I just thought I was going to do a little bit of singing and it would be a good time,” Burnett said. “Little did I know that the University Singers would grow over my four years to become a professional-quality choral group. In addition to being filled with people whom I am blessed to call my choir family, we get to make beautiful music together for four hours every week, travel for a week together on tour sharing that music, and receive such honors as a standing invitation to sing at the National Cathedral in Washington, D.C., being accepted (and turning down the offer) to sing at a national choral conference, and sing a full solo set in Carnegie Hall.

“There are so many opportunities that we have in the University Singers that other people in a choir at a small liberal arts school would never even dream of, and I attribute those opportunities to the hard work of Dr. Lynch. He has built up the choral program over the last eight years and turned it into something worth broadcasting to the world. We can’t thank him enough for that.”