Williams School Congratulates Class of 2021 Award Winners The faculty and staff of the Williams School of Commerce, Economics, and Politics congratulate our 2021 graduates who have received awards and honors for academic excellence during their time at W&L. 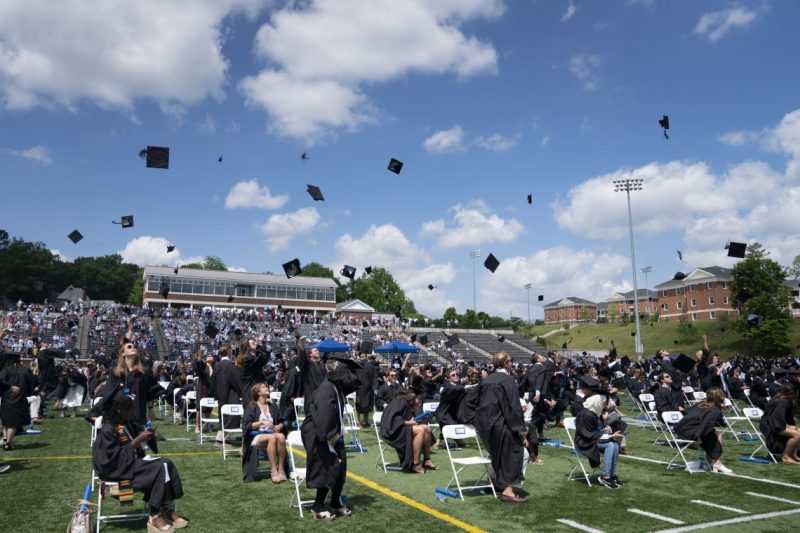 The faculty and staff of the Williams School of Commerce, Economics, and Politics congratulate our 2021 graduates who have received awards and honors for academic excellence during their time at W&L. We are pleased to honor these outstanding individuals with Williams School awards and departmental awards in accounting and finance, business administration, economics, and politics.

“Acknowledging the hard work of some of our very best students is always among the highlights of Commencement week. This year it was particularly special given what the class or 2021 has gone through,” noted Robert D. Straughan, Crawford Family Dean of the Williams School and professor of business administration.

The day prior to Commencement, Williams School faculty and staff were able to recognize its graduates with small, socially distanced, outdoor gatherings that included a handful of faculty, the award winners and their invited guests. Straughan remarked of the day, “It was rewarding to renew the tradition after not being able to present the awards in person last year. Even as we celebrate the achievements of the last four years, we anticipate the many great things that these graduates will accomplish in the years to come.”

Michael Anderson, Robert E. Sadler, Jr. professor of economics and associate dean of the Williams School, reflected on the gatherings as a “time of renewal,” and shared that “the awards won are all the more impressive given the difficult environment the award-winners faced this past year.” Anderson said of the class of 2021, “they are a promise for the future. This wonderful group of students has only begun to show what they are capable of achieving.”

Congratulations to all of our graduates!

This scholarship was created by friends and former students honoring the memory of Lewis Kerr Johnson, longtime professor of business administration. Former L.K. Johnson student William S. Rosasco III ’51 increased the scholarship fund in 1981. The scholarship is awarded to rising juniors majoring in business administration and accounting who possess the basic characteristics of integrity, initiative, independence, self-discipline, drive and leadership.

The Business Administration Department Award goes to the graduating senior with the highest cumulative GPA.

John W. Sinwell ’57 created the L.K. Johnson Marketing Management Excellence Award in 1998 to recognize the achievements of a graduating senior and honor the memory of L.K. Johnson, longtime professor of business administration.

Elizabeth B. Garrett Scholarship in Politics

The Schlegel Scholarships honor the memory of U.S. Navy Cmdr. Robert Allan Schlegel ’85, who was killed in the terrorist attack on the Pentagon on Sept. 11, 2001. Established in 2002 through a fundraising campaign spearheaded by members of Chi Psi fraternity, of which Schlegel was a member, the scholarships support W&L students who participate in foreign affairs conferences, including the Student Conference on U.S. Affairs at West Point.

The Milton Colvin Scholarship Endowment was created in 1997 by his sister, Katharine Colvin Hart,

and other members of the Colvin family to honor this distinguished teacher and his 30-year career as a professor of politics at Washington and Lee. Upon the recommendation of the head of the Politics Department, an award from the Colvin Scholarship Endowment is made to a rising senior majoring in politics.

The Accounting Department Award is presented to a graduating senior in commendation of outstanding academic performance.

The James Robert Wingert III ’85 Award is awarded to a graduating senior to recognize academic excellence in accounting.

This scholarship was established by Joseph Topinka ’63 in honor of his parents. It is awarded to at least one accounting major who plans on a career in accounting after graduation.

Elizabeth B. Garrett Scholarship in Economics

The Elizabeth B. Garrett Scholarships were founded through a bequest made by Elizabeth B. White in 1918. This fund provides for department scholarships in economics, English, French, history and politics.

Edwin F. Schaeffer established this scholarship in honor of Edwin Claybrook Griffith, professor emeritus of economics. It is awarded to an economics major who demonstrates academic excellence and leadership in student activities.

This scholarship was created in 1994 by Professor John Gunn’s former students in honor of his retirement after more than 30 years of distinguished teaching. The scholarship is awarded to rising seniors majoring in economics on the basis of outstanding achievement, leadership and character.

The Economics Academic Excellence Award, given to a rising senior or seniors, is based on the excellence of academic work in the major. The faculty of the Economics Department select the recipients.

Beta Alpha Psi is an international honor organization for students who have displayed academic excellence in the study of accounting and financial information. Founded in 1919, there are currently over 300 chapters on campuses around the world, with more than 300,000 members initiated since the club’s formation.

Omicron Delta Epsilon is dedicated to the encouragement of excellence in economics. The mission is to “encourage devotion on the part of its members as economists to the advancement of their science and to the scholarly effort to make freedom from want and deprivation a reality for all.” Omicron Delta Epsilon traces its history as an honor society to 1915 and currently has almost 700 chapters located in the United States, Canada, Australia, the United Kingdom, Mexico, Puerto Rico, South Africa, Egypt, France, Kazakhstan and United Arab Emirates.

Pi Sigma Alpha is the only honor society for college and university students of government in the U.S. At present, there are 621 Pi Sigma Alpha chapters on campuses across the country and in Guam. Pi Sigma

Alpha is a member of the Association of College Honor Societies. Pi Sigma Alpha seeks “to stimulate scholarship and intelligent interest in political science.”