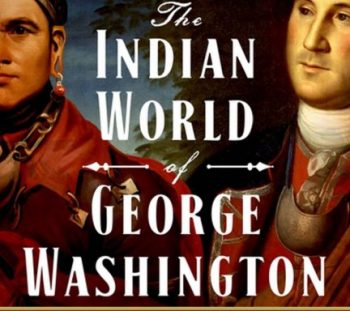 The first campus-wide event for this academic year is a virtual talk by Colin G. Calloway, a professor and author from Dartmouth College who will discuss his book, “The Indian World of George Washington.”

Native American Heritage Month, which was officially recognized in 1990, is observed annually in the United States in November. This year, Washington and Lee University’s Native American Cohort will start celebrating in October and sponsor events throughout the academic year.

“After last year’s successful Native American Heritage Month, we decided that our activities and programming should not be limited to November,” said Kelly Fujiwara, W&L special events coordinator and a founder of the cohort. “Our goals have always been big – because why not? Through researching other colleges and universities, we began to identify best practices and were inspired by the curriculum and programming being offered.”

The cohort, which was founded by W&L faculty and staff with native heritage, was formed last year to illuminate Native American history and culture.

“The cohort is inviting the W&L campus and our greater Rockbridge County community to realize that our university has an undeniable and previously unexplored institutional connection to native people through George Washington and his original endowment,” said Jessica Wager, executive assistant to the provost and a founder of the Native American Cohort.

The group has since expanded to include a consortium with William & Mary and Virginia Tech, and its members hope to initiate similar indigenous alliances with Georgetown University and George Washington University.

“The consortium is important for establishing broad collaboration across W&L and between universities like Virginia Tech in order to learn from others, build awareness and enact change,” said Fran Elrod, associate director of the Shepherd Program and member of the Native American Cohort.

On the W&L campus, the cohort recently presented to the Bonner Program. The program recruits and supports a diverse pool of 10 students per class who are committed to changing the world through responsible community engagement and leadership. Each month the students choose a theme. This September’s theme was “Moving Ideas to Action,” and the program invited the Native American Cohort to share their journey. Members of the cohort and Melissa Faircloth, director of the American Indian and Indigenous Community Center at Virginia Tech, addressed the group.

“Key points of their presentation included the power of student voice and the importance of having a passion and commitment to the issue,” Elrod said. “In this case, seeing a need to build awareness of Native Americans issues, both historic and contemporary, within the W&L and the surrounding community.”

The first campus-wide event for this academic year is a virtual talk by Colin G. Calloway, a professor and author from Dartmouth College who will discuss his book, “The Indian World of George Washington.” The title of Calloway’s talk, which is planned for Oct. 1 at 5 p.m., is “A W&L Institutional History Conversation: The Indian World of George Washington.”

The public can register for the virtual event for free at go.wlu.edu/indian-world-of-george-washington. Event attendees will have the opportunity to talk with Calloway about the book and how Washington’s relationship with various Indian nations helped shape the United States.

“The Native American Cohort is working very hard to broaden our community’s understanding of and commitment to native peoples and their histories, and creating a more welcoming campus for native students, scholars and staff,” said Lynn Rainville, director of institutional history at W&L. This event combines that important work with an important, but often overlooked, aspect of one of our namesakes, George Washington: his opinions of and policies related to native peoples.”

“Calloway’s research explores how Washington’s career as a surveyor, a military officer and then as president required him to interact with the numerous Native American tribes that lived and traveled throughout the Shenandoah Valley and to the west,” said Fujiwara. “These experiences profoundly impacted his perception of this young nation, how it would be governed and expanded, and its interactions with Europe. As the first president, Washington’s experiences with native peoples were influential in how he led.”

Danielle Moretti-Langholtz, the Thomasina E. Jordan Director of the American Indian Resource Center and curator of Native American Art at the Muscarelle Museum at William & Mary, is a colleague in the newly formed Native American consortium between the schools. Moretti-Langholtz works to share American Indian programming in an effort to strengthen native higher education and visibility in Virginia. She has also played a role in researching W&L’s connection to George Washington and encouraged the conversation surrounding Washington’s broader historical narrative during W&L’s inception.

“Creating and supporting programming that foregrounds native topics not only facilitates reframing efforts, but helps to make the campus a safe and welcoming place for native students, staff and faculty,” she said.

Ella Powers ’22 is the first student member of W&L’s cohort. She was inspired to join after attending last year’s Native American Heritage Month events on campus.

“After all the group had done to pioneer an active space on campus where Native American culture, traditions and knowledge could be shared, I jumped at the opportunity to join,” Powers said. “Even though I am new to the team, I am so energized to share our upcoming initiatives and events with our community.”

Powers encourages other W&L students to get involved in the cohort.

“Other students who are even slightly interested in this group should attend one of our virtual events this year,” she said. “If you’re hesitant due to your own identity, know that I had the same hesitations as a white-passing student on our campus. I thought I would be some sort of fraud because I didn’t outwardly identify with the Native American culture. I now know that is far from the truth, and the Native American Cohort invites and embraces anyone and everyone to celebrate and enhance their understanding of indigenous culture.”

Other cohort-sponsored events that will be free and open to the public this year include “Indigenous People’s Day: Minneapolis, American Indians, Police Brutality & Community” on Oct. 12, and a series hosted in partnership with Hillel that starts in November and is called “Joining Voices: Native American and Jewish community.” For more information and to register in advance, visit https://my.wlu.edu/office-of-inclusion-and-engagement/programs-and-events/native-american-heritage-month.

“Whether you are an enrolled member of a tribe, have a family tie to a native lineage or are just interested in learning more about Native American topics we are bringing forward, you are welcomed to every event we sponsor,” said Fujiwara.

To learn more, the Native American Cohort invites the community to reach out and email them at native@wlu.edu.