Washington and Lee welcomed 697 alumni from the classes of 1969-2004 back to campus in May during its annual spring reunion weekend. The total broke the previous attendance record of 680, set in 2018, with individual class attendance records set by the classes of 1974 and 1999. The total guest count, including alumni not celebrating a reunion and guests, was 1,173, with reunionists traveling from 43 states and Canada to reconnect with one another and with their alma mater.

The family of Professor Pamela Simpson gathers around the memorial sign at the newly dedicated Simpson House.

The Annual Meeting of the Alumni Association was held in Lee Chapel on Saturday morning. The Association elected Stephanie R. Wolfe ’99 as incoming president and Parke Ellis ’81 as vice president, as well as six new members of the Alumni Board of Directors: Heather Brock ’90 of Tampa, Florida; Victoria Choksi ’10 of London, United Kingdom; Randy Ellis ’86 of Richmond, Virginia; William Litton ’04 of Dallas, Texas; Dan McMenamin ’06 of New York, New York; and Lindsey Strachan ’09 of Richmond, Virginia.

The success of the weekend was punctuated by record-breaking reunion gifts. Collectively, this year’s reunion classes raised more than $1.7 million for the 2018-19 Annual Fund and committed over $5.7 million in five-year reunion pledges.

In addition to supporting the Annual Fund, the 25th and 50th reunion classes raised money for class projects, which support fundraising priorities of interest to the reunion classes.

Members of the Class of 1969 celebrated their 50th reunion by setting six 50th reunion records, including the overall total record, with $13,267,450 committed, and a new class project record, with $5,139,408 committed to support the restoration of Doremus Gymnasium ($1,500,000) and the Class of 1969 Leyburn Honor Scholarship ($3,640,148). When added to the current scholarship endowment, the funds will provide the full, four-year cost of attendance for one student in every class.

The Class of 1994 marked its 25th reunion with similar success, raising a total of $4,665,900 — more than doubling the previous record. The class set records for single-year and five-year Annual Fund commitments from the 25th reunion class, committing $218,000 and $881,000 respectively. They have already raised $785,000 toward their goal of $1 million for their class project — programming for the Office of Inclusion and Engagement.

“When our group met back in September to begin planning our event, there were many consistent themes to describe our W&L experiences,” said Class of 1994 Reunion Co-Chair Robby McNaughton. “Classmates described it as ‘idyllic,’ or ‘the best four years of my life.’ And yet one of our classmates, Maurice Cole, was brave enough to tell us about his own experience at W&L. It was a troubling and difficult four years, and yet Maurice so loved W&L that he was back here on campus to eagerly serve on our committee.

“After hearing Maurice’s words, our group decided to ask if there were strategic priorities that would speak to the story we had just heard. When Dean Tammy Futrell spoke to us about the Office of Inclusion and Engagement (OIE), we all knew that this was something that we wanted to put our name on. OIE would do so many things to make the school better, but for us in the room, I think what we were hearing was that it could go a long way to making the school that same idyllic place that we all loved when we were here, for as many people as possible. If it could do that, it would truly be a worthy project.”

The weekend was a success thanks to the efforts of 140 reunion volunteers, who worked throughout the year to encourage classmates to register and raise money for class gifts.

“The energy and enthusiasm on campus were palpable this weekend,” said Dennis Cross, vice president for University Advancement. “We are gratified to see the deep affection and engagement of so many alumni and volunteers. I know I speak on behalf of President Dudley and all of us at W&L when I say thank you to all of the Generals who returned to campus in body or in spirit for their milestone reunions.” 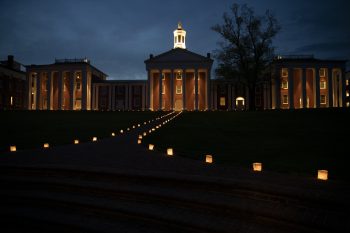 The Colonnade illuminated for Alumni Weekend 2019 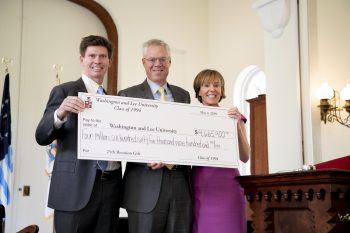 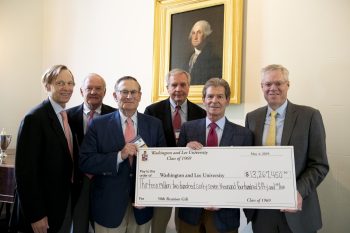