Washington and Lee University will host six leading business journalists who cover big financial and economic stories for a public panel discussion titled “Women Watching Wall Street.” The talk, which is free and open to the public, is March 5 at 5 p.m. in Stackhouse Theater.

The speakers include four W&L alumnae: Katrina Lewis ’19 and Polina Noskova ’17, both at Bloomberg News, Kinsey Grant ’17, at Morning Brew, Leslie Yevak ’17 from CNBC and Renae Merle, a reporter at The Washington Post.

They’ll be joined by Constance Ford, a former reporter and Wall Street Journal editor who is now a journalism professor at the University of Maryland, and Tracy Jan of The Washington Post.

“It’s a great time to have such a terrific group of financial journalists visit with our students because the U.S. economy and financial markets play a big role in the upcoming presidential election,” said Alecia Swasy, Reynolds Professor of Business Journalism at W&L.

The panel is part of the ongoing Reynolds Distinguished Journalists series and is sponsored by the Donald W. Reynolds Foundation and the W&L Journalism and Mass Communications Department. 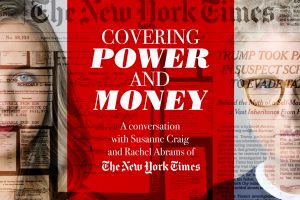 Covering Power and Money at the New York Times 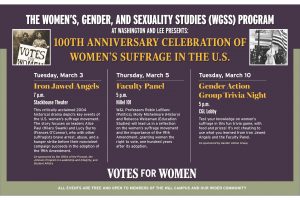