Washington and Lee University joined 68 of the nation’s top-performing colleges and universities in an alliance to substantially expand the number of talented low- and moderate-income students at America’s undergraduate institutions with the highest graduation rates. This growing alliance, called the American Talent Initiative (ATI) brings together a diverse set of public and private institutions united in a shared goal of educating 50,000 additional high-achieving, lower-income students across the country. Each ATI member institution will enhance its own efforts to recruit, enroll and support lower-income students, learn from each other and contribute to research that will help other colleges and universities effectively serve those students.

“Washington and Lee is proud to join the American Talent Initiative,” said William C. Dudley, Washington and Lee’s president. “By bringing national attention to this issue and enabling schools to share effective practices with each other, the initiative will help us to enroll and support a greater number of talented lower-income students at W&L. By doing so, W&L will make an important contribution to this critical national effort.”

Launched in December 2016, ATI is supported by Bloomberg Philanthropies. Based on the most recent federal data available, there are approximately 430,000 lower-income students enrolled at 270 institutions with the highest graduation rates. ATI aims to increase and sustain the total number of lower-income students attending these top-performing colleges to about 480,000 by 2025. To reach this ambitious goal, ATI will work to support its members’ work while adding more top-performing colleges to its membership in the coming months and years.

Washington and Lee recognizes that America’s top-performing colleges have an important role to play in this effort. Research shows that when high-achieving, lower-income students attend high-performing institutions such as W&L, they graduate at higher rates and have a greater chance of attaining leadership positions and other opportunities throughout their lives. Yet in each graduating high school class, there are at least 12,500 lower-income young people with outstanding academic credentials who do not enroll at institutions where they have the greatest likelihood of graduating.

These students have earned the opportunity these institutions offer. ATI member institutions seek to ensure that these missing students have a path to attend and thrive at the institutions with the highest-graduation rates and best track records for post-graduate success. Each college and university participating in ATI will further the national goal of developing more talent through its own strategies, which include:

While many ATI member institutions have existing efforts to support lower-income students on their campuses, what sets Washington and Lee and other members’ ATI-related work apart is the commitment to working collectively toward a shared national goal and creating a community of practice, where members convene regularly to share insights and lessons learned. Member institutions of the American Talent Initiative are also committing substantial resources to increase opportunity for lower-income students, as well as collecting institutional data which will be annually published to assess their aggregate progress toward meeting the 50,000-by-2025 national goal. 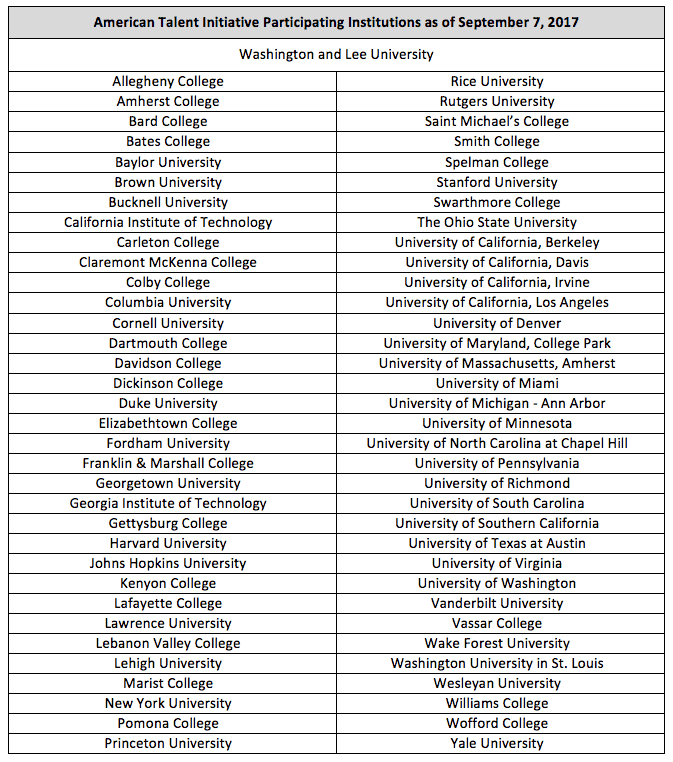