The Outstanding Law Alumnus/a award this year was presented to Greg Stillman 74L for exceptional achievements in his career and unselfish service to his community and his alma mater. In the 45 years since he graduated from the Law School, Stillman has served on reunion committees, including chairing the current one, hosted alumni events at his home, served as class agent and as a Law Council member. In addition he has taught the Patent Litigation practicum at the Law School since 2011 and coached the IP moot court team. 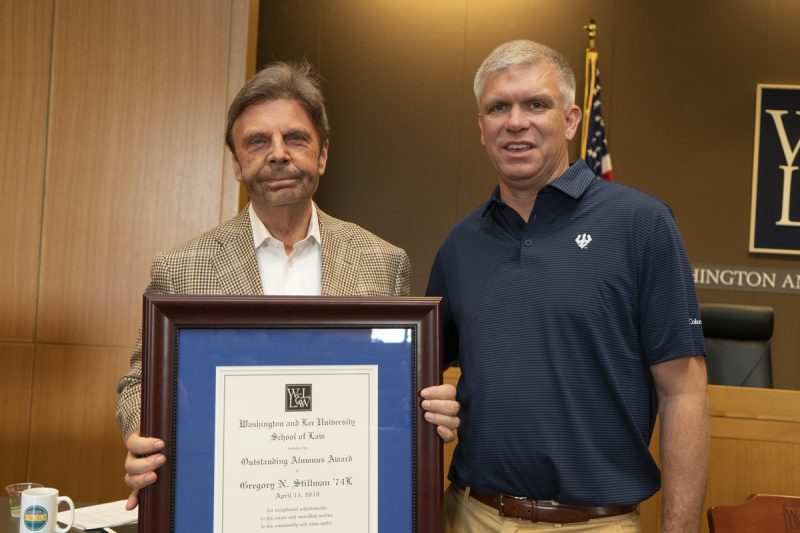 Stillman retired last year from Hunton & Williams (now Hunton Andrews Kurth), where he started practicing law in 1975. He served as practice group leader of the firm’s intellectual property group, residing in both the DC and Norfolk offices while also serving as the managing partner of the firm’s Norfolk office. His practice focused on federal trial and appellate litigation, with an emphasis on business torts, intellectual property, securities, and corporate governance. Stillman tried more than 100 jury trials to verdict, leading patent cases involving a wide range of technologies such as internet software, biotechnology, medical and orthopedic devices, telecommunications, business software, textiles and pharmaceuticals.

In his retirement, Stillman has launched his own law firm, The Stillman Law Group, which focuses on mediating patent disputes. He served as the Virginia State Chair of the American College of Trial Lawyers, Chairman of the Hampton Roads Chamber of Commerce, and Chairman of the Virginia Beach School Board. He has received numerous awards and recognition throughout his distinguished career. 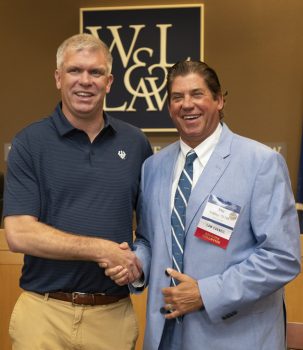 This Volunteer of the Year award is a way for W&L to recognize those individuals who go above and beyond assisting the Law School. This year’s award went to Stu Nibley ’75, ‘79L. Nibley is a partner in K&L Gates’ Washington, D.C. office and focuses his practice on both counseling and dispute resolution on behalf of government contractors.

Over the years Nibley has served on several reunion committees and area campaign committees. He has served as a Law Firm Liaison for the Annual Fund and as a Law Mentor. He has hosted alumni events at his firm and worked closely with the Office of Career Strategy to help place law students.

Outside of W&L, Stu recently concluded his term as Chair of the American Bar Association’s Section of Public Contract Law. He serves on the U.S. Court of Federal Claims Advisory Council, the National Defense Industrial Association, and the National Contract Management Association. He is on the board of advisors for Thomson Reuters West Publications, Law 360 Government Contracts Publication, the PubKlaw Publications, and the BNA Publications.

In addition, Nibley has volunteered as a coach with Special Olympics Montgomery County Youth Basketball, an evaluator with Pennsylvania State Special Olympics Games, a volunteer play-by-play announcer for Operation Smile, and a speaker/discussion leader for “Perspective and Motivation” National Youth Leadership Conference.

The Young Volunteer of the Year Award went to Randall Miller ‘14L. A member of our Young Alumni Council, Miller has worked tirelessly with the Admissions office on helping recruit prospective students through phone calls, emails, and face-to-face visits. Miller, who was unable to attend the awards ceremony, currently serves as Assistant Attorney General in Austin, TX.