This is how Washington and Lee Law Professor James E. Moliterno would sum up the U.S. legal profession’s reaction when facing challenging times. In reality, the legal profession has faced a crisis of one sort or another every 10-20 years going back one hundred years. But what troubles Moliterno is how the U.S. legal system has reacted to these challenges.

“The American Legal Profession acts like it has eyes in the back of its head and none in the front,” says Moliterno. “Time after time, when faced with a self-perceived crisis, the legal profession has tried to maintain the status quo by retreating to its traditional values and structure and throwing up walls to block whatever threatens it.”

The result, says Moliterno, is that the main governing structures of the American legal system have been at best idle bystanders to some of the most important cultural and political shifts in the nation’s recent history rather than leaders and agents of change.

Moliterno details all this in his new book from Oxford University Press titled “The American Legal System in Crisis.” In it, Moliterno covers everything from recent challenges such as the explosion of technology and globalization back to the waves of immigration in the early twentieth century, examining how the legal profession reacted to these events.

Moliterno argues that these reactions usually took one of two forms.

“Sometimes, the legal profession reacted by doing nothing, as was the case when the ABA officially opted out of the civil rights movement during the 1960’s. But with other issues, the profession reacted with additional rules and structural changes meant to preserve the world as they knew it.”

For example, when eastern and southern European immigrants began to pursue careers as lawyers in the early 20th Century, the ABA prohibited advertising and put limits on contingent fees, two actions that hurt the lawyers’ ability to serve their clients, who were mostly low income laborers with worker’s injury claims. In addition, the ABA and Association of American Law Schools created entry barriers to the profession by establishing educational requirements designed to prevent immigrants and the poor from becoming lawyers.

“There is certainly nothing wrong with educational requirements in order to be a lawyer,” notes Moliterno. “But in this case the change was made expressly to preserve the status quo and exclude those from the profession that the establishment did not think belonged.”

To be clear, when Moliterno talks about “The Legal Profession” he is not talking about individual attorneys or even law firms, both of which have played major proactive roles in the different crises the book covers. He is referring to organizational structures and institutions, like the ABA and AALS as well as state bar associations and state supreme courts.

“Individual lawyers and law firms have often been at odds with their leadership organizations during these times of crisis,” says Moliterno. “This has never been more clear than during our current challenge, that created by advances in technology, the globalization of legal practice, and the economic downturn.”

Moliterno says that firms and lawyer/entreprenuers have suffered from the opposition of governing organizations to new revenue models and innovative methods of delivering legal services. For example, corporate investment in law firms, prohibited in the U.S., has allowed law firms in England to surge ahead of their American competitors in the global market for legal services.

What makes it worse, says Moliterno, is that the resistance is clearly pointless, that is, if the past is at all predictive of the future.

“The American legal system protests but always loses these fights as the world changes around it,” says Moliterno. “These shifts in society, culture, technology, and economics cannot be ignored forever. And so changes are eventually made to rules and structures, but really, the legal profession at that point is just playing catch-up with reality.”

A simple example from the world of technology illustrates this point. An ABA ethics committee only last year modified its rules to include references to email and other forms of electronic communication as methods of correspondence between lawyers and clients.

Moliterno is sympathetic to the legal profession’s default reaction to change, as it is born of the way in which lawyers are trained from day one of law school.

“We are after all trained to look at precedent, to look to the past to tell us what we should do today,” says Moliterno. “But the American legal profession needs to be equally forward looking to allow the profession to grow with society, solve problems with, rather than against, the flow of society, and be more attuned to the very society the profession claims to serve.”

“The American Legal Profession in Crisis” is available now from Oxford University Press.

James E. Moliterno is Vincent Bradford Professor of Law at Washington and Lee University School of Law. Moliterno is an acknowledged international expert in legal ethics and professionalism, and has traveled throughout the world to help countries develop ethics policies and training programs. Since joining Washington and Lee in 2009, Moliterno has helped design and implement W&L’s innovative third-year curriculum, which consists entirely of practice-based simulations, real client experiences, and advanced explorations into legal ethics and professionalism. Moliterno’s recent publications include “Cases and Materials on the Law Governing Lawyers” and “The Litigation Department Lawyer,” an outgrowth of his work developing litigation-based practicum courses for the School. 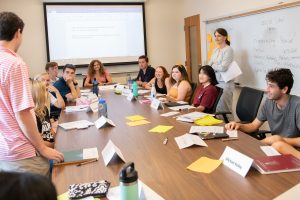