W&L Law Unveils Tribute to first African-American Graduate A new installation at Washington and Lee University School of Law celebrates the life and legacy of Leslie Devan Smith Jr., who graduated in 1969.

The display, located in the lobby outside the Millhiser Moot Court Room in Lewis Hall, tells the story of Smith’s arrival in Lexington, his many accomplishments as a student, and his all-too-short career with the U.S. Department of Justice.

In the spring of 1966, the university’s student government advocated in favor of recruiting African-American students. Smith matriculated to the Law School that fall along with Dennis Haston, who became the first black student to enroll at the College.

Smith’s motivation for pursuing a law degree is best expressed in his own personal statement from the application.

“Law has been and continues to be a vehicle in which man may move toward greater freedom and individual dignity,” wrote Smith. “I would be very proud of being a part of so noble a profession.”

While Smith’s time at W&L was not free from the racist attitudes of that time and place, by all accounts he thrived during his three years in Lexington. Les, as he was known to his fellow students, served as a member of the Washington and Lee Law Review, the Student Bar Association and the Legal Research Association. Additionally, he served as president of Delta Theta Pi, co-editor of the law school magazine The Lawyer, and treasurer of the Young Democrats Association.

Smith spent his summers during law school working in Washington, D.C. While on Capitol Hill, he was the first African American to clerk in a Virginia Senate office. He served as a research aide to Senator William B. Spong, who came to regard Smith as his protégé. Spong recommended Smith for a clerkship the following summer at the law firm of Steptoe & Johnson.

Smith passed the Virginia State Bar exam the winter before he graduated. At the commencement exercises in June 1969, he was inducted into the law school’s chapter of the Order of the Coif. After graduation, Smith joined the U.S. Department of Justice, working in the Civil Rights Division. Fittingly, his work involved gaining the compliance of Southern school boards with court-ordered desegregation.

Tragically, Smith’s promising legal career was cut short on June 9, 1971, when he was murdered inside his DuPont Circle apartment. He was just 26 years old. The crime remains unsolved. Smith’s remains are interred in the Oakland Cemetery in his hometown of Chuckatuck, Virginia. His headstone bears the one-word epitaph, “Attorney.”

Les Smith with the staff of The Lawyer

The new display closes with a remark from the entire Law School community. “We at Washington and Lee University School of Law are proud that Leslie Smith achieved this professional status in part through the legal education he received here, and we are grateful to him for leading our school through the challenging process of integration.”

Val McWhorter ’66, ‘69L became friends with Smith during law school. He was able to view the memorial along with other classmates during his 50th reunion, held recently in Lexington.

“We both ended up in Washington and would meet for lunch periodically, share W&L stories, professional endeavors, and political gossip,” recalled McWhorter. “We laughed a lot and he seemed very happy with his career at DOJ. The tragic ending of those dreams is a tale I tell often to others from W&L. The memorial wall is a wonderful tribute to Les, and to the advances the school has made since he was ‘the first.’”

Dean Brant Hellwig worked closely with John Jacob, who manages the Law School archives, in creating the tribute display. “Seeing the tribute recently installed in the Moot Court lobby was invigorating,” said Dean Hellwig. “The tribute not only allows us to honor the legacy of Leslie Smith, it also makes a statement about who we are today and what we want our community at W&L Law to be in the future.” 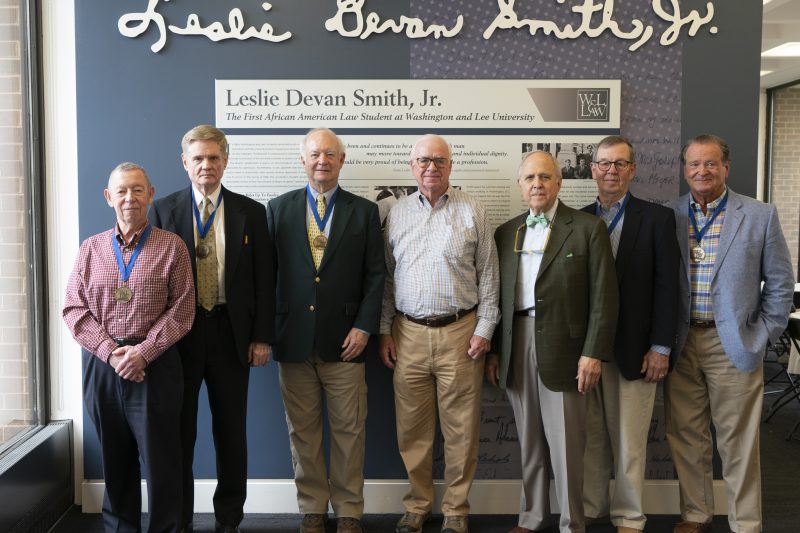