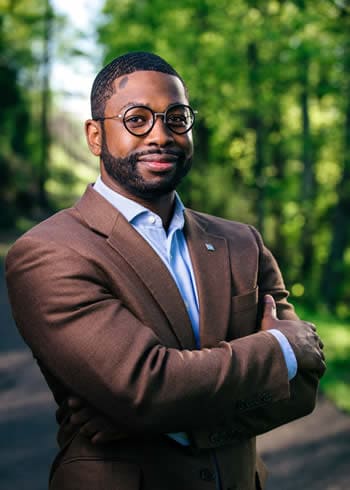 Hernandez Stroud, a visiting assistant professor at Washington and Lee University School of Law and a 2015 law graduate, has landed on Forbes’ 2018 list of the top 30 Under 30 in Law & Policy.

To arrive on this list, candidates were culled from among law schools, professional organizations, the upper echelons of politics and law, and the top ranks of the most promising startups in the field. The final list was determined by Ivan Fong, a senior vice president of legal affairs at 3M and former general counsel at the Department of Homeland Security under President Obama; Mike Needham, CEO of Heritage Action for America, a highly influential conservative grassroots organization; Harvard’s Laurence Tribe, one of the most important progressive scholars on constitutional law; and Timothy Hwang, the cofounder of FiscalNote, and a member of the Law & Policy 30 Under 30 Class of 2016.

At W&L Law, Stroud teaches and researches civil rights, federal courts, federalism, legislation, and statutory interpretation. As a law student, he served as Managing Editor for the Washington and Lee Journal of Civil Rights and Social Justice and President of the Black Law Students Association. He won best brief at the 2014 National Frederick Douglass Moot Court Competition and was a finalist in the 2014 John W. Davis Moot Court Competition.

After law school, Stroud was a Fellow at Yale Law School, where he studied constitutional and criminal law implications of governmental interactions with drug addiction during pregnancy.  While at Yale, Stroud served as a policy advisor to New Haven Mayor Toni N. Harp. Stroud then clerked for the Honorable Madeline Hughes Haikala of the U.S. District Court for the Northern District of Alabama.

Following his visiting appointment at W&L Law, Stroud will take a clerkship with the U.S. Court of Appeals for the First Circuit.

Stroud graduated with a B.A. in history and political science as a Hess-Abroms and Spencer Scholar from the University of Alabama at Birmingham and earned an M.S. in urban education and education policy from the University of Pennsylvania.  While at Penn, as a Teach for America teacher, he taught history and government at an all-boys public school in Philadelphia, Pennsylvania.