W&L Marks 20th Anniversary of 9/11 with Campus Events The Washington and Lee University community this year will remember the tragedy of Sept. 11, 2001, with a memorial ceremony, prayer vigil and placing of 2,977 American flags. 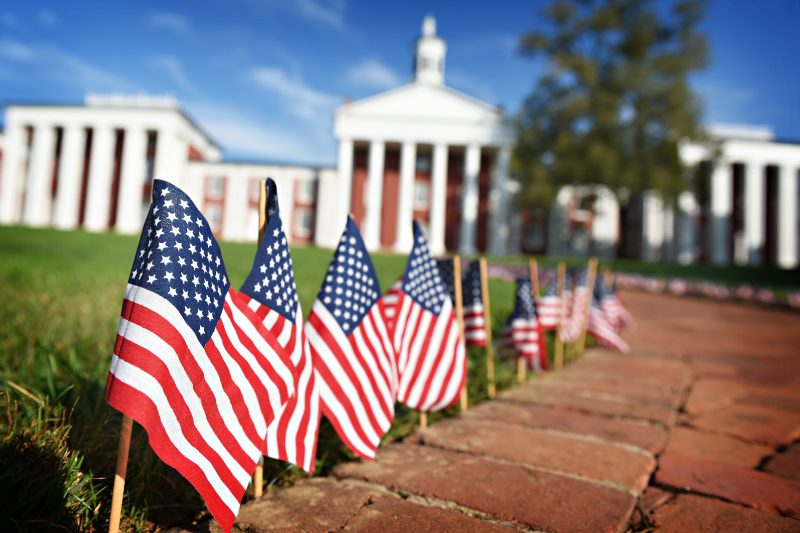 Washington and Lee College Democrats and College Republicans line the path between Washington Hall and University Chapel with flags on Sept. 11 each year.

A series of events hosted at Washington and Lee University on the 20th anniversary of the Sept. 11 terrorist attacks will offer the community a chance to remember that dark day, memorialize the many lives lost in the events and honor the heroes who responded.

Everyone in the community is invited to gather on Stemmons Plaza in front of Huntley Hall on Sept. 11, 2021, at 8:46 a.m., the exact time American Airlines flight 11 struck the North Tower of the World Trade Center in New York City. At that time, the university will observe a moment of silence while the University Chapel bells are tolled in commemoration of the anniversary.

The program will also include acknowledgment of the two W&L alumni who perished in the attacks, Rob Schlegel ’85 and James Gadiel ’00. Schlegel was on the staff of the Chief of U.S. Naval Operations at the Pentagon and had been promoted to Commander just weeks before the attack; Gadiel worked in the equities department of Cantor Fitzgerald, on the 103rd floor of the North Tower of the World Trade Center.

“We encourage all members of the university community to attend the 9/11 commemoration,” said Jim Farrar, secretary of the university. “The 20th anniversary of 9/11 is a solemn moment across the country, and it’s valuable for our students, faculty and staff to come together and honor those who were lost that day, as well as recognize those who responded heroically to assist those in need.”

The backdrop for the ceremony will be a sea of 2,977 American flags placed along the length of Stemmons Plaza by W&L student groups in honor of those who died in the attacks. Groups participating in the flag-planting, which will take place starting at 7 p.m. on Friday, Sept. 10, include College Republicans, College Democrats, Students for Historical Preservation, Catholic Campus Ministries, English Speakers of Other Languages, Habitat for Humanity, Hillel and Love 146. The placing of American flags is an annual tradition on the W&L campus that typically takes place along the Colonnade and the walkway to University Chapel, but the location was changed this year because a make-up commencement ceremony for the Class of 2020 will take place on the Front Lawn at 10:30 a.m. on Sept. 11.

“I am glad we have all these student organizations working together in a unified effort,” said Kamron Spivey, vice president of College Republicans and president of Students for Historical Preservation.

Later on Sept. 11 at 12:15 p.m., the campus will host an interfaith prayer vigil on Stemmons Plaza.

In the weeks leading up to the ceremony, the student organizations participating in the flag placement will also table on campus to help raise funds in memory of 9/11 for two organizations: the Families of Freedom Scholarship Fund and The Khaled Hosseini Foundation.

“We decided to fundraise for these two organizations because we believe it’s important to remember that 9/11 not only affected the United States, but also had lasting ramifications across the globe that we’re still witnessing today,” said Judy Park ’22, president of College Democrats.

Park echoed Spivey’s sentiments about the number of student groups involved in this year’s anniversary activities.

“It seems like there are very few events in American culture where polarity isn’t present, and I think it’s safe to say that commemorating the events of 9/11 is one of them,” she said. “Besides showing respect for those lost that tragic day, we wanted to take this opportunity to demonstrate student unity.” 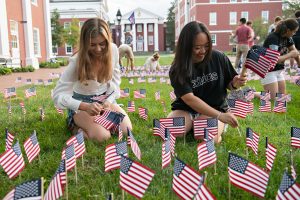